Also known as: MLB 2k11
MLB 2K11 shifts baseball from a spectator sport and places you inside the game. You're the team boss and you're responsible for selecting players and figuring strategies to get to and win the World Series. If you wish, you can bat, pitch, and field. With greater AI and graphics, you're really beyond a virtual ballgame. You're at the stadium but as an insider. 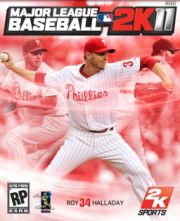