Also known as: Tom Clancy's Splinter Cell: Chaos Theory
Sam Fisher is back for more espionage and intrigue in Splinter Cell: Chaos Theory. All the nail biting about whether to go in "hot" with guns blazing, or to use stealth is back in this new version, plus some amazing improvements. Chaos Theory ups the ante with vastly improved graphics, totally open level design, and coop gameplay. Fresh from the East Timor operations, Fisher is now put on the front lines of information warfare. The year is 2008 and the world is suffering from citywide blackouts, stock exchange sabotage, and electronic hijacking of national defense systems. The stakes are high and Fisher, as the NSA's most elite black-ops agent, is inserted in operations to aggressively gather intelligence. A wide range of missions call on a lethal mixture of weapons and close range combat. 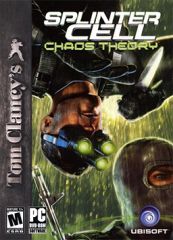