Also known as: Sid Meier's Civilization 3
Civilization III offers 16 playable civilizations, and each has its own strengths and bonuses. The game begins in the year 4000 B.C., when your civilization is nothing more than a primitive tribe, and each turn progresses the game forward in time. You manage growth, military production, city development, diplomacy, and scientific research as your civilization grows from a single village to several towns to a continent-spanning metropolitan sprawl. The fun is in deciding whether to research writing or the wheel, whether to build a musketeer to take out an encroaching enemy pikeman or direct your city to work on the culturally significant Sistine Chapel. There are five ways to win the game, ranging from wiping out the other civilizations with military power to defeating them through cultural dominance, which is one of several new victory conditions. 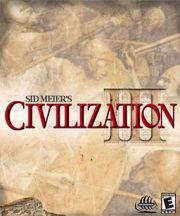