New Super Luigi U is a DLC release for New Super Mario Bros U. Playing as Luigi, the DLC will alter all the levels with a reduced time limit of one hundred seconds. The game will be released as downloable content for the main game as well as a standalone retail version.

2. Kirby and the Forgotten Land 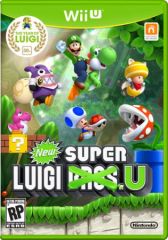