Star Trek: Bridge Crew brings fans into the Star Trek universe as they assume the role of a Starfleet officer and complete missions that will determine the fate of their ship and crew. Playable cooperatively online with a crew, or solo as Captain, Star Trek: Bridge Crew puts players and their friends directly onto the bridge of a new starship, the U.S.S. Aegis, or the U.S.S. Enterprise NCC-1701, recreated from Star Trek: The Original Series. 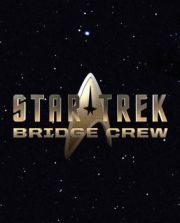