Also known as: Army of Two 2
The Army of TWO is back! A carefully orchestrated series of mysterious catastrophes is dragging Shanghai, China to the brink of ruin, and now the Army of Two must fight their way through ravaged city districts as they try to beat the odds and uncover the secret of the Fortieth Day. 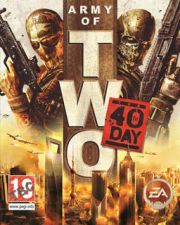