Yooka-Laylee is an open-world platformer. Explore huge worlds, meet (and beat) a unique cast of characters and horde a vault-load of shiny collectibles as buddy-duo Yooka (the green one) and Laylee (the bat with the big nose) embark on an adventure to thwart corporate creep Capital B. 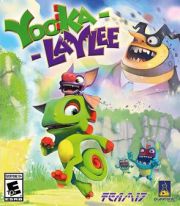 Our Review of Yooka-Laylee
78%
Good
The Verdict:
"A retro revival that delivers on its nostalgic promise"
Game Ranking
Yooka-Laylee is ranked #613 out of 1665 total reviewed games. It is ranked #53 out of 174 games reviewed in 2017.
612. Shantae: Half-Genie Hero
PlayStation 4
613. Yooka-Laylee