Also known as: C & C: Generals
In Command & Conquer: Generals gamers choose from three radically different fighting forces, build an army from the ground up, and seek out and destroy opposing players' armies and bases. Your three choices are the USA, the Chinese, and the Global Liberation Army (a group of freedom fighters/terrorists). Each force has unique strengths and weaknesses; Generals does a good job making the three forces differ in more than aesthetics. The USA has costly but technically advanced units along with a stunningly powerful Air Force, the Chinese have weak but cheap ground units that gain advantages when attacking in large groups, and the GLA has a ramshackle army that relies on stealth. Each force caters to a completely different style of play, and playing around to find the group that you'll like the most is a lot of fun. 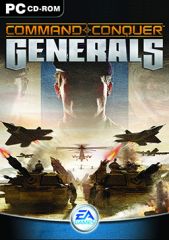