Also known as: Quake IV
You are Matthew Kane, a member of the elite Rhino Squad and part of the next massive invasion that spans across the entire Stroggos planet. Equipped with hi-tech weapons, vehicles and teamed with Earth's top marine squadron you soon realize that this war is far from over. In fact, your worst nightmare is soon realized when you discover that the only way to defeat the Strogg is to become one of them.

Zone of the Enders HD Collection 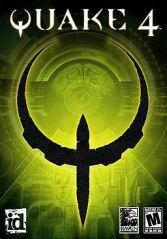