Developed exclusively for Xbox 360 by acclaimed developer Bungie, Halo 3: ODST is a new, stand-alone expansion to the Halo saga that lets players experience the events leading up to the epic story told in Halo 3 through the eyes of an entirely new character the ODST (Orbital Drop Shock Trooper), as they search for clues leading to the whereabouts of their scattered squad and the motivations behind the Covenant's invasion of New Mombasa. The game adds a new dimension to an all-encompassing universe that gamers around the world have known and loved since the release of the first Halo game in late 2001.
Halo 3: ODST Videos (1)
View All 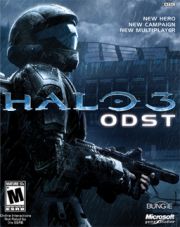 Our Review of Halo 3: ODST
--
not reviewed
Halo 3: ODST is not yet ranked
Related Games