Also known as: Massive Action Game
In the near future, governments are supposedly at peace. A shadow war, fought by private military corporations, emerges. You are dropped into this unprecedented war - the first to have battles of 256 real players on a global battlefield. Prove yourself alongside your 8-man squad and become an elite fighter or earn the right to lead a squad, platoon or ultimately an entire army of players. Your calling a waits. 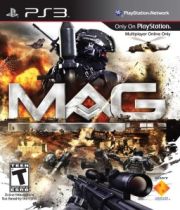