Rain is an adventure game in which the player takes up the role as a young boy who is invisible and can only be seen when standing in the pouring rain. When walking under shelter outside the rain, the boy cannot be seen and can only be tracked by his watery footprints. The player will have to utilize the visibility of the boy, and other creatures, in the rain to solve various puzzles and tasks throughout the game. 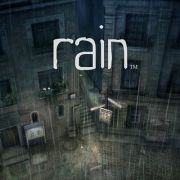