Also known as: FTL: Faster Than Light
FTL: Faster Than Light is a space flight simulator game incorporating elements of roguelike games, developed by Subset Games. FTL was announced on February 27, 2012 via Kickstarter. The player controls a spacecraft whose crew has intercepted a data packet from a rebel fleet. The goal is to reach a Federation fleet, waiting several sectors of space away, without being destroyed or caught by the rebel fleet that is in pursuit.

Faster Than Light Screenshots (10)
View All 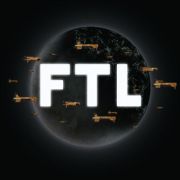