This year, 2K Sports has joined forces with the legendary JAY Z as Executive Producer to transcend sports video games and take virtual hardwood to the next level. Featuring an enhanced MyCareer mode and all-new gameplay features, NBA 2K13 will let gamers pit the best players in NBA history against the new dynasty of talent. NBA 2K13 is produced by multi-platinum recording artist and hip-hop mogul Jay-Z, who presided over both the soundtrack and in-game elements such as menus, art and gameplay cameras. 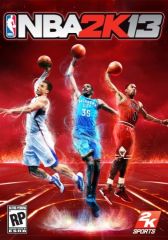