Also known as: RE 5
Experience the thrill and terror all over again with Resident Evil 5. Featuring Chris Redfield of the original Resident Evil and Sheva Alomar, a West African agent of the Bioterrorism Security Assessment Alliance (BSAA), this sci-fi survival game is staged in a remote desert colony packed with hordes of fast-moving, quick-thinking enemies that represent a whole new breed of evil. 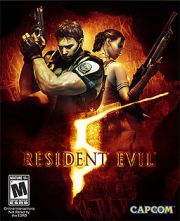 Our Review of Resident Evil 5
72%
Good
Reviewed on PC
"Stiff controls and archaic gameplay design prove problematic but enjoyable in coop modes, amazing looking and great running game."
Game Ranking
Resident Evil 5 (PC) is ranked #930 out of 1675 total reviewed games. It is ranked #54 out of 69 games reviewed in 2009.
929. Olija
Xbox One
930. Resident Evil 5