F1 RACE STARS is a fast-to-the-fun arcade racing game for all ages featuring the official FORMULA ONE cars, teams and circuits as they’ve never been seen before. Drivers including Lewis Hamilton, Fernando Alonso and Sebastian Vettel have been transformed into personality-packed heroes bursting with charm and character and stunning FORMULA ONE locations have become exhilarating racing theme parks designed for speed and wheel-to-wheel competition. 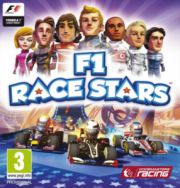