Also known as: E: TW
Call the shots in epic battles all over the world and expand your realm of influence throughout the tumultuous eighteenth century with Empire: Total War for your PC. Set against the bold intellectual landscape of the Enlightenment, this extension of the Total War franchise brings you out of the middle ages and into a realm where guns, gunpowder, and naval warfare have a dramatic influence on the face of combat. 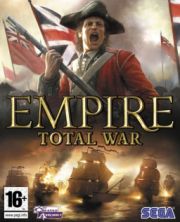