It's the year 3587; conflict spans the stars. Huge robot armies are locked in an enduring stalemate. In their bid for galactic conquest they call upon the most powerful group of mercenaries in the universe: the Awesomenauts! Play as one of several Awesomenauts and storm the online arenas alone or with friends. Each Awesomenaut can be upgraded with their own unique items to suit different strategies. 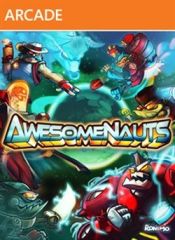