Also known as: PES 2013
As befits a game endorsed by Cristiano Ronaldo – a player who embodies the skill and grace of top level football – PES 2013 sees the series returning to its roots, with the emphasis on the individual skills of the world’s best players, and giving the player the total freedom to play any style of ball, which includes for the first time full control over shots. 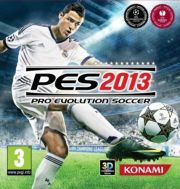