Steel Battalion: Heavy Armor takes place in 2082 in a world lacking computers due to a silicon-eating microbe that started destroying all microprocessors in the world in 2020. It opens with the United States military running an amphibious landing operation on an occupied New York using massive bipedal robots known as Vertical Tanks as the primary attack force. 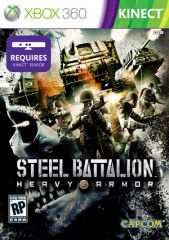