Also known as: Baldur's Gate II
Baldur's Gate II: Shadows of Amn is a computer role-playing game developed by BioWare and released on September 26, 2000. The game is the sequel to Baldur's Gate, and, opening only a few months after the events of the earlier game, continues the story of the player character, whose unique heritage has now gained him the attention of a new personage, Jon Irenicus. Like Baldur's Gate, the game is set in the Forgotten Realms campaign setting and is based on the Advanced Dungeons & Dragons 2nd edition ruleset. 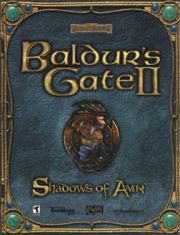