Shoot Many Robots is a 4-player co-op, run-n’-gun action shooter. Published by Ubisoft, it’s Demiurge Studios’ first original title, and it’s available for digital download. From tiny chainsaw-wielding Choppers to gigantic fire-spewing Fatboys, there are many robots to shoot - in quantity and variety. And each robot type has multiple models, each getting increasingly fierce as the difficulty ramps.

Shoot Many Robots Screenshots (10)
View All

Shoot Many Robots Videos (1)
View All 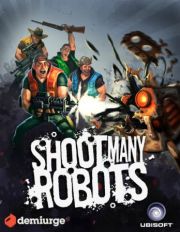