Also known as: Half Life
The Half-Life 2 with Deathmatch DVD collects two of the must-have shooter games, bringing you twice the action. Start out with Half-Life 2, where you return to the alien research facility called Black Mesa. The aliens are now pouring into our world and you'll join the resistance movement to stop them. Battle it out with friends in crazy, realistic mulitplayer action with Half-Life 2: Deathmatch.
Half-Life 2 Videos (1)
View All 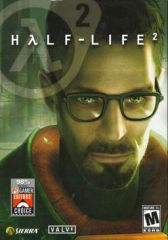