MLB 11: The Show is a multiplayer baseball game that delivers a true Major League Baseball experience for gamers on the PlayStation 3 platform. MLB 11: The Show features a new analog stick default controls for pitching, batting and fielding that instead of just relying on buttons requires timing and rhythm. This focuses the attention of the player, just as if you were on the field. It also features PlayStation Move support in its Home Run Derby functionality. 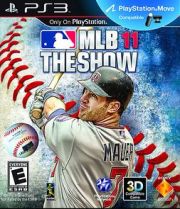