Also known as: DMC 4
Devil May Cry 4 is an action game that was published and developed by Capcom in 2008. The game is the fourth installment to the Devil May Cry series. In the game, the player controls both Nero and Dante, the game's protagonist and the series' title character as they fight enemies in close combat using firearms, swords, and other weapons. The characters Lady and Trish from previous games in the series makes an appearance, along with new characters Nero, Kyrie, Credo, Gloria, and Agnus. The game is set after Devil May Cry but before Devil May Cry 2. 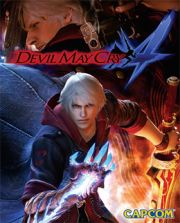