Ratchet and Clank: All 4 One is a multiplayer Action-Adventure-Platforming game that continues the popular Ratchet & Clank franchise on PlayStation 3. The tenth game overall in the franchise, Ratchet and Clank: All 4 One is the first game in a new Ratchet & Clank game series and features a franchise first, four-player co-op functionality. This is available both locally and online. 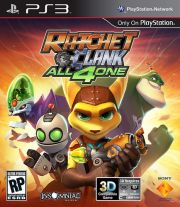