Ninja Gaiden 3 is an Action-Adventure game in which players take on the role of the iconic video game ninja, Ryu Hayabusa. Ninja Gaiden 3 embraces the evolution of the series by incorporating gameplay scenarios new to the franchise, such as a closer look at the backstory of Ryu Hayabusa, the blending of realistic and modern combat situations with classic ninja warrior skills, more accessible yet still challenging gameplay and franchise first multiplayer game options. 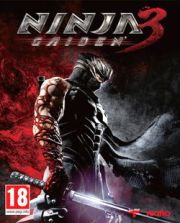