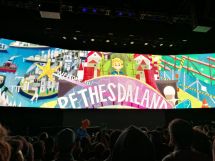 Top News this Month
Bakugan: Champions of Vestroia announced
A new game for the TV and toy franchise