I haven’t watched an opening cutscene as bad as Lococycle’s over-long, unfunny, and uncomfortable introduction in a long time. Developer Twisted Pixel have a history of quirky humor, with games like The Gunstringer and Splosion Man, but Lococycle misses the mark in unprecedented fashion. If the unfunny cutscenes don’t turn you off, the monotonous, uninteresting gameplay is sure to do the trick. Lococycle feels like a game without direction, wildly swinging its arm for something to grab onto and establish some credibility, but even at its best Lococycle feels outdated and cliché.

The premise of Lococycle is the best part, and threatens to be funny. Set in the same world as Splosion Man with bad guy corporations Big Science and Big Weapons, two super-powered bicycles are introduced to a garden party of interested world leaders - all of whom are moustache twisting villains. When the two bikes, I.R.I.S and S.P.I.K.E, are moved to storage, I.R.I.S is struck by lightning, marking her sentient. After watching a commercial for the Freedom Rally in Scottsburg, IN, I.R.I.S decides that she has spent enough time being stored in the weapons facility and is ready to hit the open road. To make sure that she keeps running, I.R.I.S grabs her Spanish-speaking mechanic, Pablo. 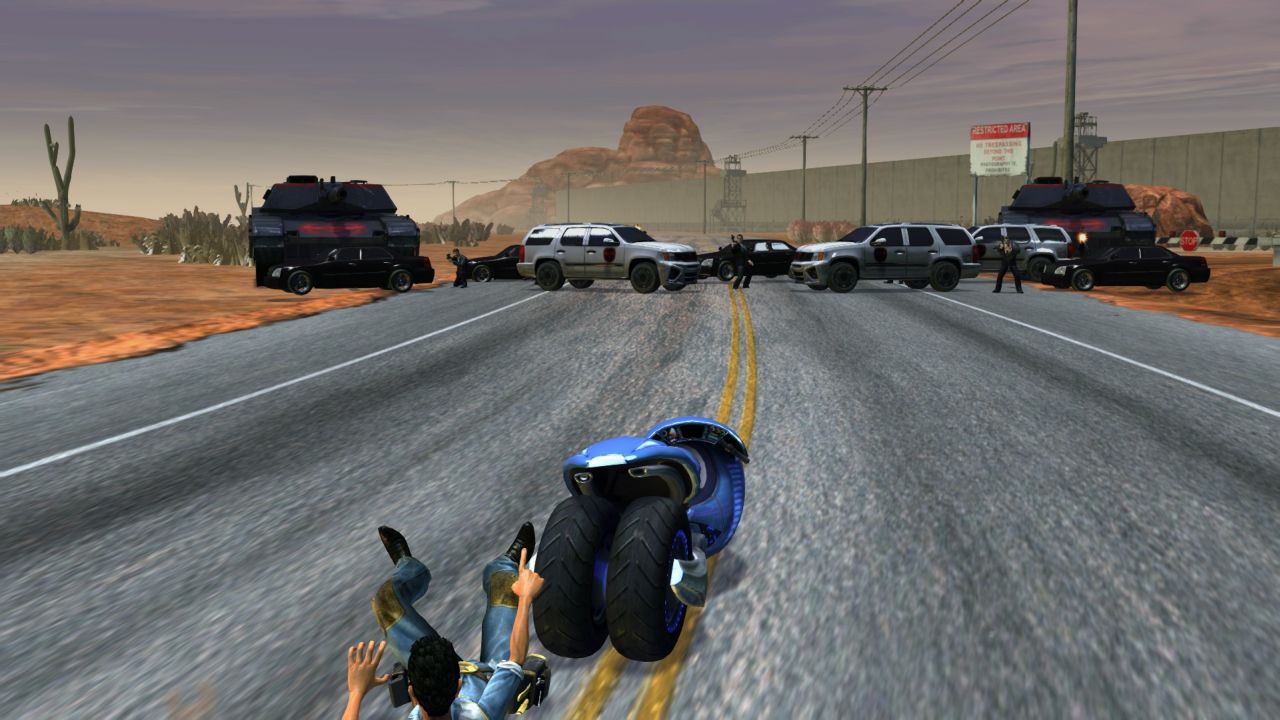 The biggest problem about the narrative in Lococycle is that it fails to demonstrate any variety throughout. Sure, the locations change, but the dynamic between Pablo and I.R.I.S fails to shift throughout the game. Instead, Pablo makes the same one-note joke over and over, playing on the fact that he speaks Spanish and I.R.I.S cannot understand him as her translation chip has been damaged. This joke is made immediately and pounded into your head time and time again. There are some smart jokes in the game, the character arc of the villainous S.P.I.K.E is a nice little storyline, but these merely manage to be reprieves in what is a dull and lame narrative. The weirdest thing about the story is the live-action cutscenes that bridge all of the levels. These scenes are acted and shot with all of the talent of B-tier sci-fi movie that would be at home being ridiculed by Mystery Science Theatre 3000. Twisted Pixel seems aware of this and tries to play up the campiness of these scenes, instead they simply fall flat.

Lococycle blends the feeling of an old arcade shooter and beat ‘em up, allowing players to combine these skills to wreck combo-heavy chaos as dozens of enemies come charging at you. Twisted Pixel attempts to keep things fresh by changing up the sequences that are littered throughout the level, but as these sequences lack depth or fine tuned gameplay, they quickly feel repetitive. There is plenty of variety in the levels, the problem isn’t a lack of things to do, it is that all of them are paper thin. At its core, the majority of the gameplay reverts back to brawling with robots and suit-wearing thugs, which can be accomplished by simply mashing buttons. There’s so little skill or strategy needed in these fights that when I was circling my thumb around the controller -literally, just pressing A, B, X, Y in succession - I was able to rack up my highest score. The game also features large scale boss fights which - at their best - are also repetitive.

When Lococycle changes things up, it throws odd sequences at you and shoves in rigid boss fights that are elaborated quicktime sequences. These boss fights often feature I.R.I.S’s super-weapon counterpart, S.P.I.K.E, but having the same character constantly chasing I.R.I.S and Pablo through the game’s duration adds to the lack of flavor. Even when the game tries to change things up it still suffers. It may seem unfair to knock Lococycle’s attempts at creativity, being the vanilla nature is what so often holds it back; however some of these moments are the worst in the game. The second-to-last boss fight attempts to poke fun by parodying fighting games, but it is so poorly put together and handles so sloppily that it feels even worse than the repetitive sequences that normally plague Lococycle’s game time. 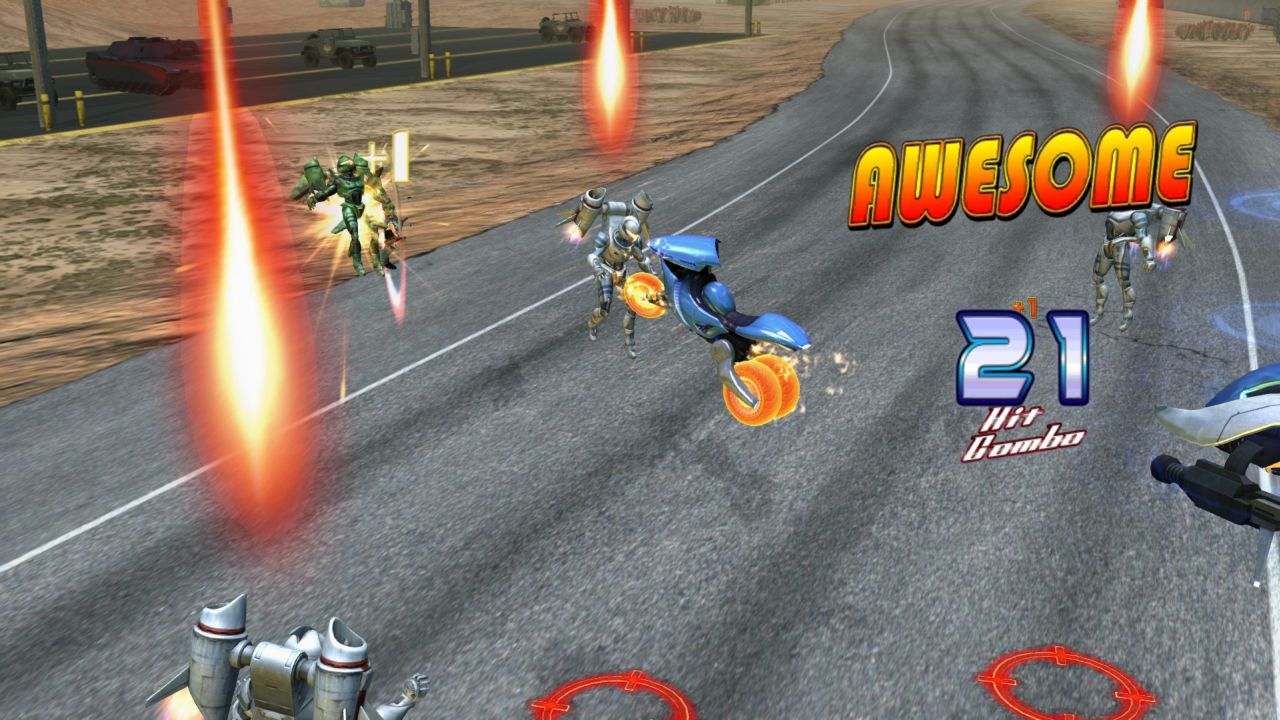 After finishing these dulls missions you are assigned a letter grade to determine your aptitude at the game. These scores are uploaded to leaderboards which compare you with other players, lending to Lococycle’s arcade-like nature. If the game was tighter with its mechanics and offered a more natural challenge, this might have been a better idea. Instead, it becomes quickly uninteresting as dying a handful of times gives you an instant “F”. Lococycle fails to be as addicting or strategically engaging as it needs to be to make a leaderboard worthwhile.

While the leaderboard may not be worth checking, you will need high scores to upgrade I.R.I.S. in between levels. At least, you should need high scores, but Twisted Pixel dumbs down the game to make sure that unless you are earning sub-“C” scores from start to finish, you will max out your bike. Nerfing this process and assuring that a mediocre playthrough gets tricked out, takes away the reward from earning high scores. It also takes away the importance of picking how you want to improve I.R.I.S, since eventually all bikes will end up the same.

The one nice variation of Lococycle is the scenic change from level to level. From the greenery of picture-esque Florida, to the deserts of Arizona, to the snowy mountains of Colorado Lococycle uses its road trip framing device to keep the setting fresh. It is just sad that Twisted Pixel could not think up better things to do in these settings than simply having you mow through bad guys in repetitive fashion. 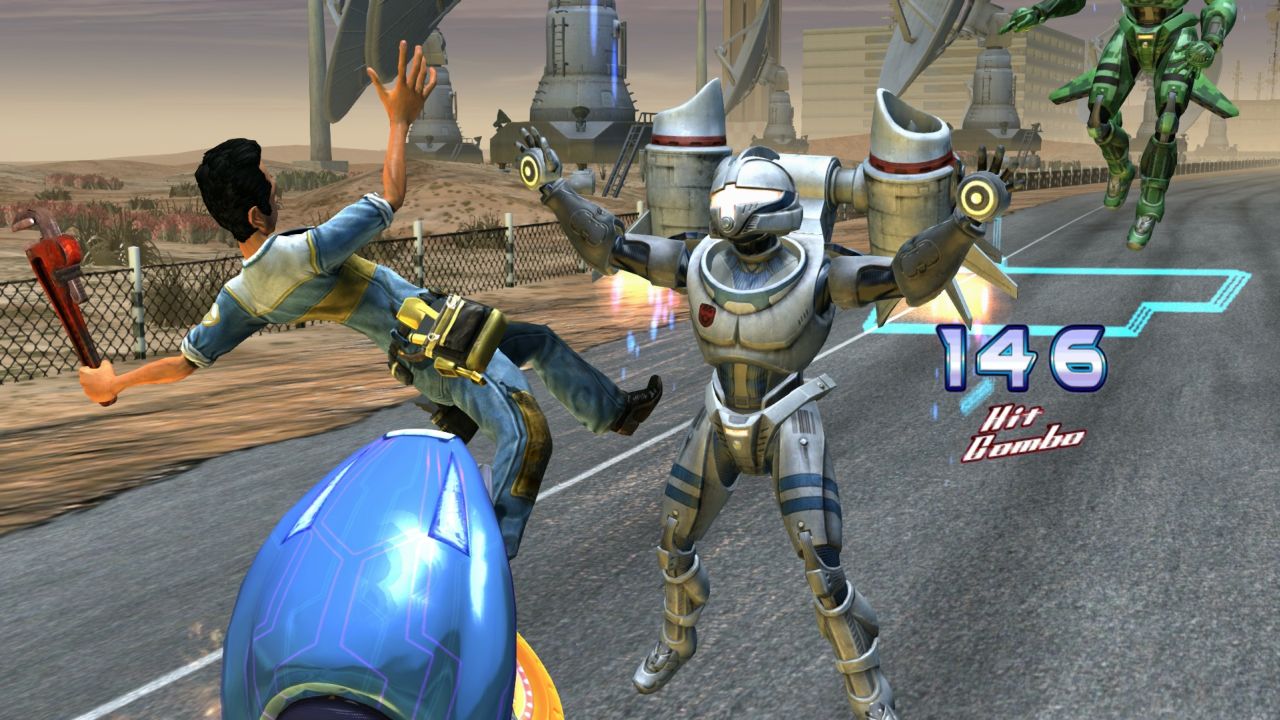 Lococycle threatens to be charming; the concept of having a sentient, super-powered motorcycle, dragging her mechanic behind her, ruminating about friendship and thrills of life is a smart idea. There are even decent vocal performances, most notably from Lisa Foiles who voices the humorous I.R.I.S and Robert Patrick (of Terminator fame) as S.P.I.K.E. However, the goodwill charm wears off quickly.

There is a rushed element to Lococycle, a feeling that is created by a lack of depth and attention to detail. While there is a lot of heart to the idea, without anything interesting to fill the playtime, the game becomes a squandered opportunity. For all intents and purposes the title is little more than an on-rails shooter, with a couple of sequences to alleviate the tedious gameplay. There’s no creativity, no spark to elaborate on a good concept. Hopefully Twisted Pixel can find a return to form in their next title, because Lococycle feels like a painful, and bewildering misstep.

Our ratings for LocoCycle on Xbox One out of 100 (Ratings FAQ)
Presentation
58
Beautiful scenic elements show off how gorgeous an American road trip can be, but unfortunately the backgrounds are the only thing worth seeing. The groan-inducing cutscenes kill any charm the levels may have.
Gameplay
52
There should be variety to the game, sequences are changed up a decent amount. But every mechanic feels so shallow and uninteresting they are instantly rote.
Single Player
45
There’s very little to enjoy about Lococycle’s experience. A leaderboard fails to be interesting due to the games lackluster gameplay, and the narrative is plain lame. Luckily, the playtime is mercifully short at about 4 hours.
Multiplayer
NR
None
Performance
70
While Lococycle’s load times are short, it fails to show off the power of the Xbox One. The Kinect is also ignored.
Overall
52
Lococycle isn’t broken, but that’s the only praise I can give it. The game offers up uncomfortably unfunny material and sandwiches it with boring gameplay. In the end, the game is a squandered opportunity and a failed attempt at an idea that could have had merit. 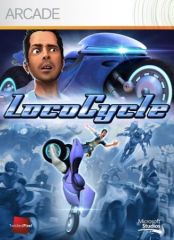 All videos for LocoCycle (1)
Advertisement ▼