THE LEGEND OF ZELDA: THE WIND WAKER HD
Platform: Wii U
88
SummaryNewsArticlesVideoScreens

The Legend of Zelda: The Wind Waker HD Review

The Wind Waker is perhaps the most divisive of all the games in the long and storied history of the Zelda series, but it’s almost certainly my favourite. Hear me out here. It may not have the undisputed classic status of series heavyweights such as A Link to the Past or Ocarina of Time, but The Wind Waker charted new territory for the franchise and its HD makeover on the Wii U does the original justice, if not bettering it.

First released ten years ago on the Nintendo GameCube, The Wind Waker initially underwent a great deal of criticism for its childish, cartoony visuals that many nicknamed ‘Celda’ as they beat their chests in time to the gunfire of the newly emerged ‘mature’ shooters of the day. This was partly due to the realistic art style of the Space World 2000 tech demo, which promised a grittier Zelda that fans – for better or worse – wouldn’t see until 2006’s Twilight Princess. 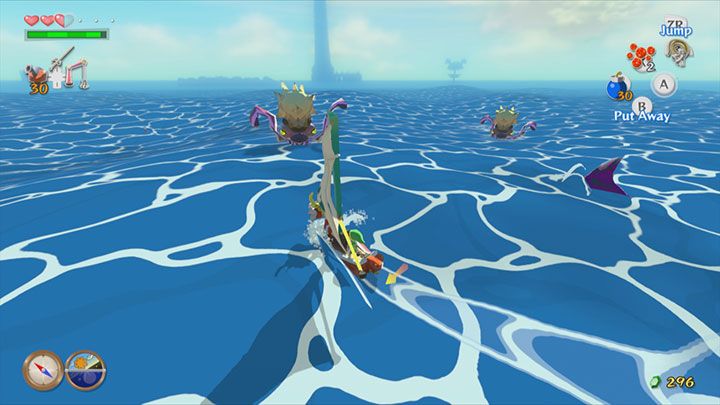 But even back when The Wind Waker was first revealed, with its lovingly, unapologetically cute and charming art style, many of those naysayers secretly whispered sweet nothings to images of Link on a bright vast sea, spilling from the cold light of their monitors.

Fast forward to the present and we Wind Waker lovers don’t have to hide in shame any longer. It’s now generally regarded as one of the better games in the series, and it seems Nintendo thinks so too, remastering it with a full HD upgrade and selling it as an AAA release, no less, with its own unique Wii U bundle to boot.

Screenshots of the game look good, of course, but to truly appreciate what Nintendo have done, you need to see it in motion. And in motion, sailing across the blanket of blue that is the Great Sea, the sun setting in the distance, this game looks simply glorious. In fact, it’s hard to believe that it isn’t a brand new release, and I truly envy those playing it on the Wii U for the first time. 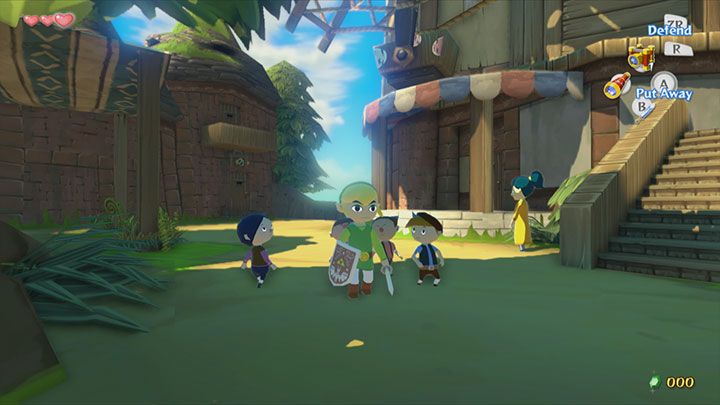 It seems then, that in this widescreen, 1080p presentation, the game has finally achieved the original’s potential. The only downside visually is the somewhat excessive bloom lighting, but in reality it isn’t anywhere near as bad as first suspected when Nintendo revealed the remake earlier this year. The improved lighting, too, does wonders for the game for the most part, especially in darker sections such as the Forsaken Fortress. But even with the lighting there is a proverbial asterisk: when Link himself is heavily lit – at worst from the beaming cascade of gold that spills out of a newly opened chest – he suddenly no longer appears like a flat Saturday morning cartoon, but rather the somewhat crude 3d model that he really is, almost resembling a claymation figurine. But this is a tiny niggle, negligible against the many wonders and triumphs of the game’s art and visual design.

However, an update to the game’s looks is not all Nintendo have addressed, as many HD updates tend to do. They’ve made a number of tweaks to fine tune the entire experience and make it more palatable to modern gamers. Namely, there is now a fast sail which not only lets you travel across the sea at twice the speed, rendering all complaints of dull sailing void, but also changes the wind as you steer the boat, removing the frustration of using the wind waker every two seconds to change your course. For purists, though, there’s always the regular sail, which works much the same way as it always did.

Secondly, the dreaded Triforce quest in the game’s last act has been greatly streamlined, and although still a bit of a fetch quest, it does a lot to fix the original’s pacing issues. Historically, you had to find eight charts, get them deciphered – at a whopping 398 rupees a pop – and then sail to the position on said chart and trudge up a Triforce piece from the bottom of the ocean. Now you only have to find three charts; the other five Triforce pieces can be found in the locations where their respective charts used to be, so no game content was cut per se – just the tedium of getting the charts deciphered and sailing to their locations. It makes you wonder why Nintendo didn’t just get rid of the charts completely, but I’ll take it as it is. 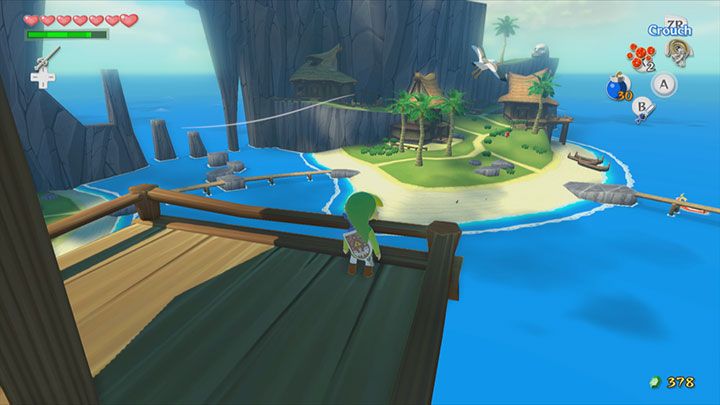 One thing Nintendo have really made the most of with this opportunity is the incorporation of the Wii U’s gamepad, and it’s funny that a ten year old game is one of the first to really show the potential of Nintendo’s struggling console. An interactive map of the sea was a must, of course, but I soon became so used to tapping an island to get a better look at it, or simply glancing at the map in general to make sure that I was heading in the right direction – all without pausing the action – that it became apparent that I could never go back to the old ways again.

But that’s just the tip of the gamepad iceberg. All inventory is stored on the touch screen too and easily swappable with a simple swipe of the finger. Melodies for the wind waker itself appear on there as well so that you don’t have to remember them, and the list goes on and on.

Miiverse integration is incorporated neatly too, taking place of the infamous Tingle Tuner, an app of sorts (in the pre-app days) where a second player could take control of Tingle on a Game Boy Advance and drop bombs on pesky sharks and pirates. It’s a shame to see this feature go, especially since it would have been so easily reborn on the Wii U gamepad – or better yet a friend’s 3DS – but the Tingle Bottles are a welcome replacement.

At any point in the game (after receiving said bottle from Tingle near the beginning of the adventure) you can write a message, a hint or a fun quip and throw it out to sea, where, as if my magic – you can almost hear the echo of Tingle muttering his famous words: ‘kooloo-limpah!’ – the message will arrive on the game’s Miiverse page where a motley crew of helpful forum goers will answer any question you have. To my surprise, I found myself using this feature quite a bit, mainly because there is a really good community out there. This became even more addictive once I received the picto-box and was able to take selfies (yes, selfies) of Link making ‘I’m with stupid’ faces with any of the denizens of the Great Sea. 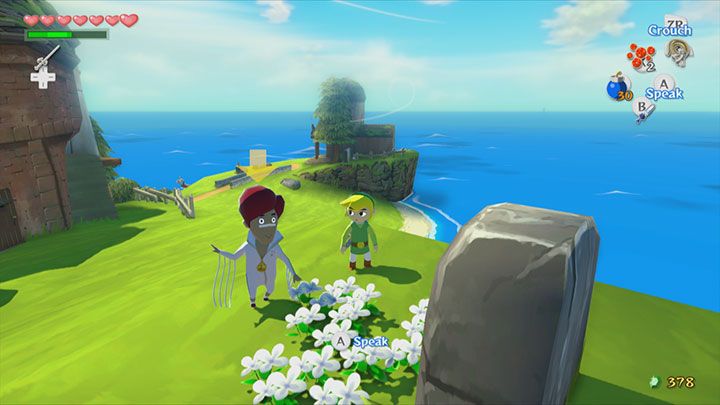 It was a joy every time I found one of the sparkling bottles out on the waves, left by some other intrepid traveller, lost in awe and wonder in the same world that I too was exploring. A Nintendo-esque Dark Souls multiplayer, if you will.

And it’s that sense of wonder throughout that really makes The Wind Waker special. For me, sailing atop the King of Red Lions, the open ocean before you, gives a true sense of adventure that no other game has ever beat. With the triumphant swell of the ocean theme song catching in your sail as your surge forwards, endless possibilities at your fingertips, islands dotting onto the horizon, you can forgive any of the game’s faults. Yes, it may have less side quests and things to do compared to other Zelda titles, and yes it has less of the series’ signature labyrinthine dungeons we all love so dear, but what is here is gold.

It is a shame that Nintendo didn’t take the chance to really go the whole hog and make this a ‘Director’s Cut’ of sorts, adding a couple of those famous dungeons where they had originally been cut, but as they have stated before, those designs were reused in subsequent installments. As it is, The Wind Waker HD, in my opinion, is one of the best of Nintendo’s remasterings to date and well worth your time and investment, whether you’re new to the Great Sea, or a veteran like myself.

Our ratings for The Legend of Zelda: The Wind Waker HD on Wii U out of 100 (Ratings FAQ)
Presentation
90
A glorious HD remastering. Sailing the Great Sea has never looked better.
Gameplay
87
Arguably the greatest combat in the series, but lacking in the number of the series' inimitable dungeons.
Single Player
85
A grand quest of epic proportions, yes, but not as deep as other iterations in the series.
Multiplayer
NR
None, unless you count Miiverse, which is incorporated thoughtfully.
Performance
85
Nothing to report. A solid remake of a solid game.
Overall
88
The Wind Waker HD is a fantastic addition to the Wii U library, and certainly one of the best on the system so far. The graphical overhaul is gorgeous and the gameplay tweaks make it well worth revisiting this classic. If you're new to its delights, then you really have no excuse to pass it up. 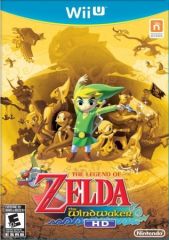 56. To The Moon
PC
Related Games