Battlefield 4 arrives with an excellent multiplayer component that is overshadowed by innumerable technical problems. This sequel was destined to be a refinement of Battlefield 3, one of the best shooters from 2011, with DICE making many small improvements to the successful recipe. Unfortunately, it is the most technically flawed Battlefield game in at least 10 years. While primarily a multiplayer experience, it retains a shallow single player campaign that has not learned much from its predecessors. The multiplayer is packed with many features, including the return of an unconvincing Commander and imposing Levolution moments. There is more emphasis on vehicular combat and naval vessels play a crucial role on some maps. Single player is essentially a preamble for the online component, and the only way to unlock some multiplayer weapons. 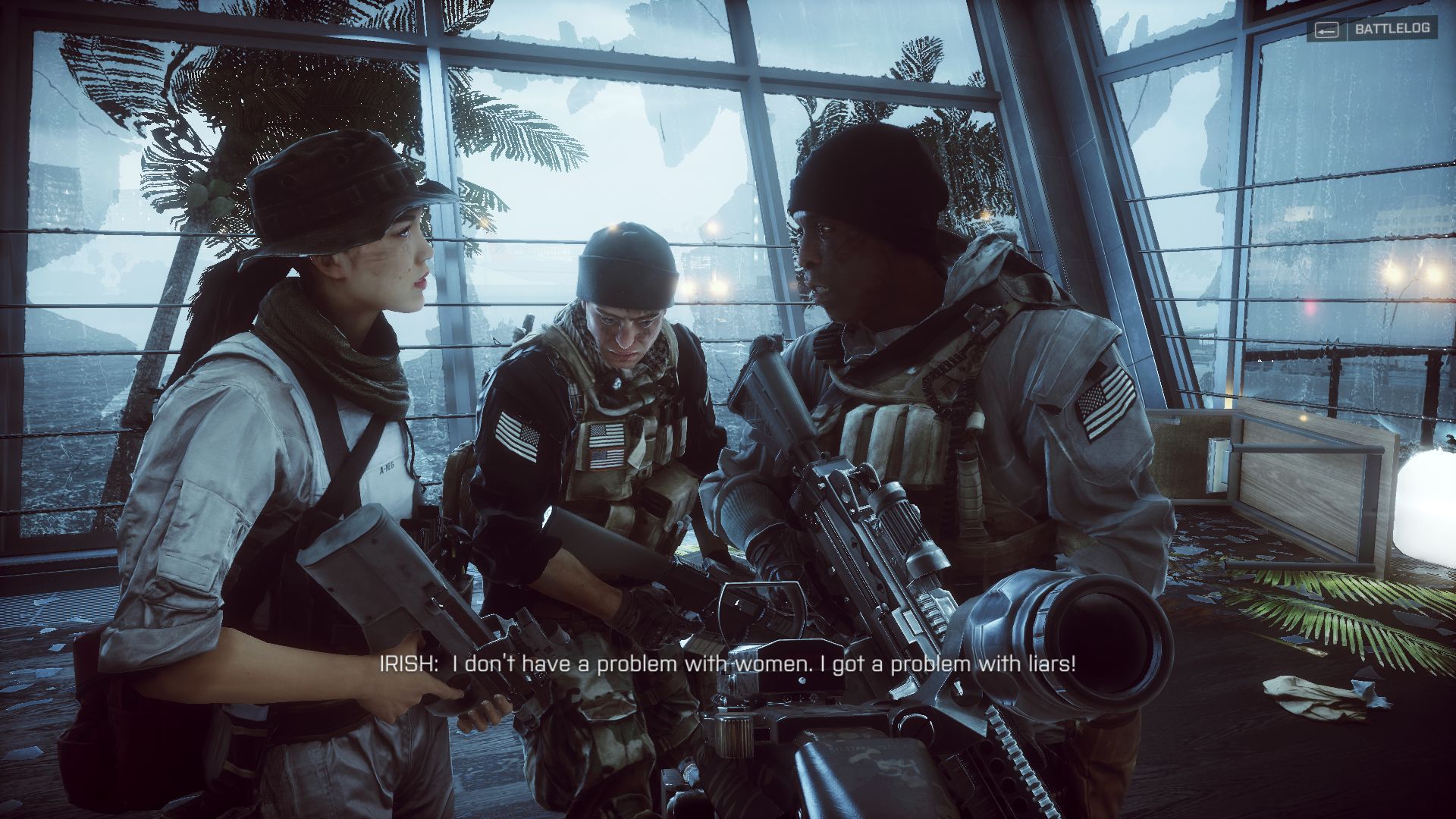 Single player has you assuming the role of Sergeant Recker, placed in charge of a small squad codenamed Tombstone. Their orders are to evacuate VIPs from Shanghai but the waters are muddied when the story lacks clarity and goes off on unnecessary tangents. As Recker, players do not have precise control over the squad they are commanding. You can only order squad members to suppress enemies. The silent protagonist aspect of Recker is handled poorly within the context of the story. Often you’ll be following the very soldiers that you should be ordering around. So you feel like the ‘special’ squad leader that is made to think is in charge when you are effectively a dog on a rigid leash. A modicum of choice, or a better handling of conversations, would have repaired this unnecessary rift.

Single player moves from one engagement to the next with a familiar pace if you have played the Battlefield 3 campaign. Enemy AI is capable, when it does not glitch out, and your friendly companions will assume serviceable cover positions. The campaign is linear, but there are side areas to explore with hidden weapons that are unlocked for later use at weapon crates. These crates, placed in sensible positions within combat zones, allow you to alter your weapons on a case-by-case basis. If you are being attacked from a distance, changing to a sniper rifle provides immediate rewards. All weapons have excellent handling, just like its predecessor, so every combat sequence is satisfying. Unfortunately, the campaign weapon selection is limited to predefined attachments and this is no more obvious when the knife is your primary stealth option.

There are times when the campaign attempts to emulate a multiplayer-like experience. In one section you can take a tank through a park area while AI tanks lob shells over rolling crests. Alternatively, you could abandon the tank and experiment with explosive gadgets behind crumbling structures. One later area, set in a flooded cluster of houses, is probably the best part of the campaign. In this scenario, multi-tiered structures are occupied by snipers and anti-tank soldiers fire tow missiles. You can take the mobile-AA and decimate the area, or equip sub-machine guns and clear each building rapid-fire style. These choices are refreshing but short-lived. It was a smart idea to use the same buildings in single player that you will find in the multiplayer maps though. This way the campaign trains players to use gadgets and familiarizes them with the basic map structures. 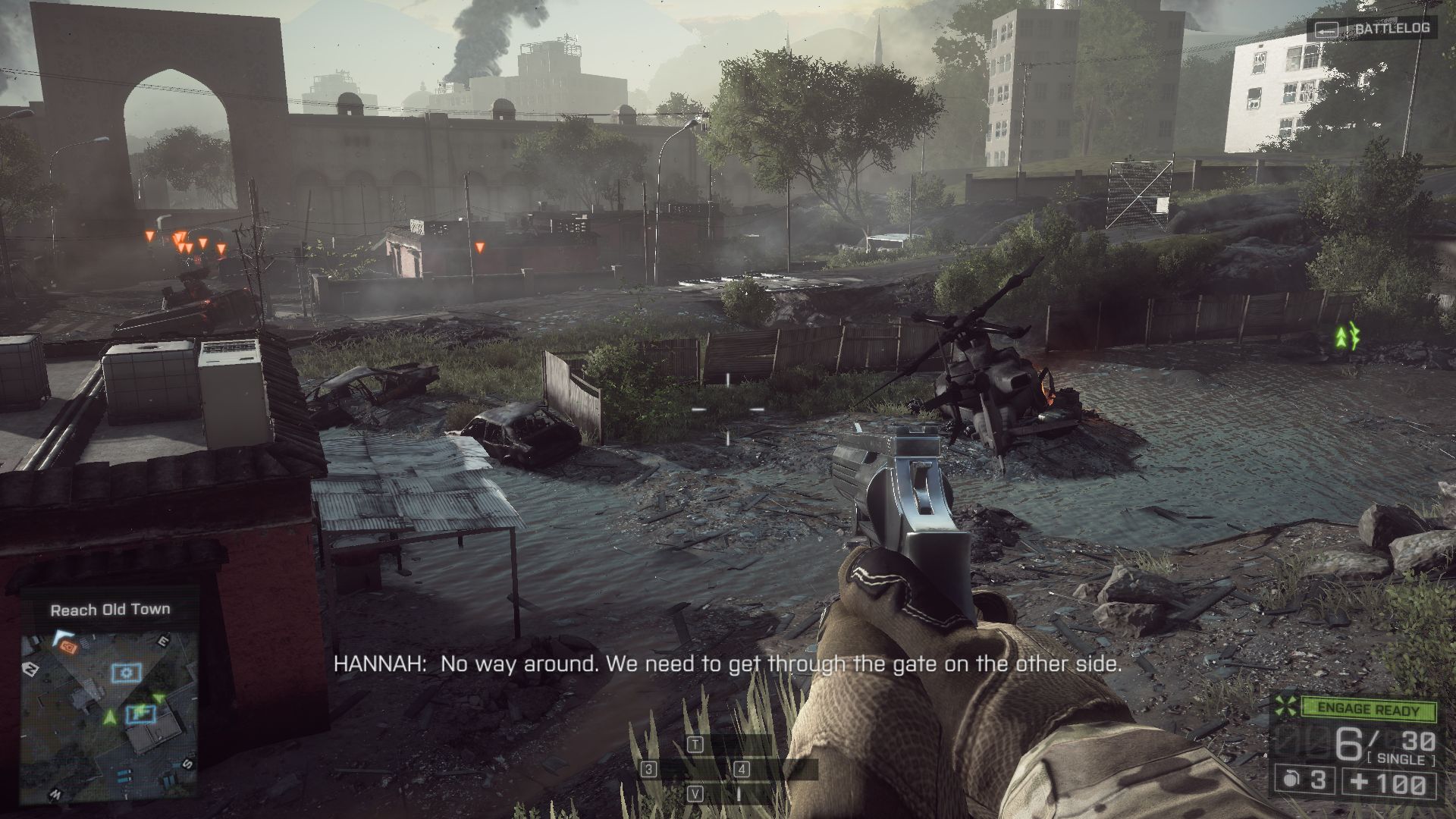 Some campaign areas allow you to flank, snipe or use a vehicle

The campaign showcases numerous visual strengths within Frostbite 3, but they are offset by some weaknesses. Visual highlights include a gun fight at the top of a skyscraper or trailing a tank on foot between abandoned cars in Singapore. Weather effects are excellent, especially when the wind sways trees naturally. Tombstone character models are highly detailed and look spectacular under certain lighting conditions. However, the solo campaign features excessive, and inaccurate, reflective surfaces. The worst example is a water feature at the base of a skyscraper where the reflections are at odds with the world. These are not subtle reflections and you cannot avoid seeing them. Battlefield 4 tries to be flashy and ends up looking cheaper than it should.

Technical glitches are ever-present in Frostbite 3 during the single player. When fighting soldiers near a shoreline, a dead body will float 20 feet above the water. In another chapter, after finding a hatch within a naval vessel, your squad will run backwards until they are teleported into a cut scene. After destroying an incoming chopper, a single Chinese soldier will begin running on the sky before vanishing. Friendly and enemy soldiers will walk through solid objects like they don’t exist. Many of these problems have been in the Frostbite engine for years and their continuing presence should be worrying for Electronic Arts. If EA plan to use the engine for many future games, how can they create a polished experience when the creators of the engine struggle? Despite numerous issues, the single player can be endured for the multiplayer unlocks. 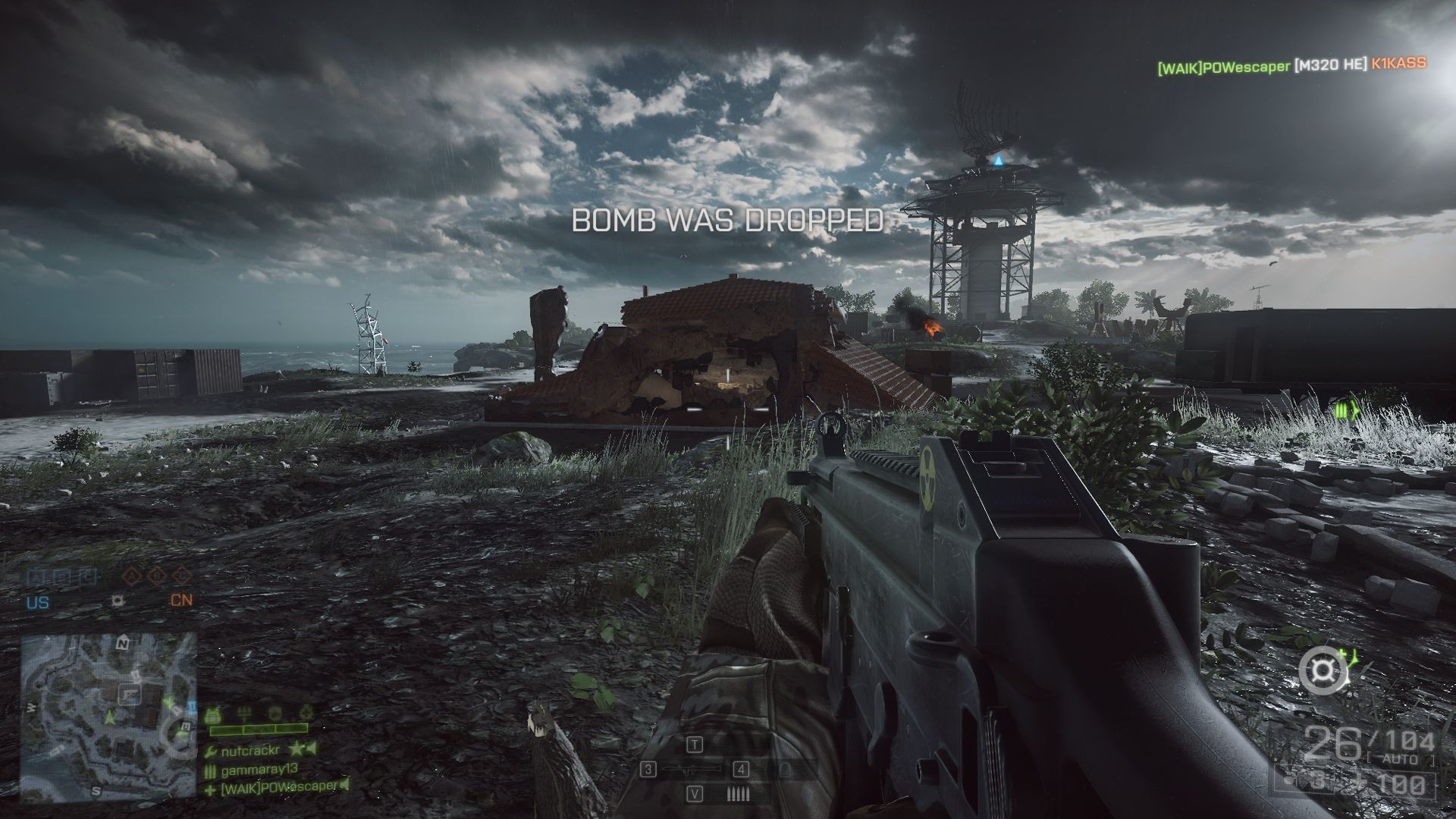 Destruction is still key in multiplayer, as many areas can be flattened

Multiplayer will always be the mainstay of the franchise, regardless of what extra features have been added offline. Is Battlefield 4 multiplayer a revolution for the series or an evolution? Like every previous game in the series, it is an evolution of concepts. This time players are treated with a comprehensive class system with more gadgets and customisation options. Levolution is a new feature that causes large changes to maps based on player-triggered events. Naval units play a bigger role, but are only present on half of the 10 launch maps.

Our Review of Battlefield 4
81%
Great
The Verdict:
"A gregarious online experience that demolishes itself and the competition"
Game Ranking
Battlefield 4 is ranked #392 out of 1775 total reviewed games. It is ranked #39 out of 158 games reviewed in 2013.
391. Zone of the Enders HD Collection
PlayStation 3
392. Battlefield 4