Commander mode returns, although the implementation is different to BF2 or BF2142. The basic commands are here: UAV scan, supply drops and issuing squad orders. Additional abilities let you set high-value targets or promote squads. The big change is that Commanders do not exist on the battlefield. You cannot hunt a commander and destroy his assets because assets are linked to flags and the Commander merely views the game from above. The game does not change appreciably when a Commander is doing his thing in large matches. There were many situations where the losing team was the only side with a Commander. Occasionally your friendly commander will drop a vehicle for you, or reveal waves of orange triangles on your map, but the impact is minor. As a squad leader, you might get orders to capture the same flag you are already attacking. For most players this is rarely transparent and it doesn’t bring team cohesion. DICE have created a Commander that has little impact on the end result, and often relies on luck to succeed. 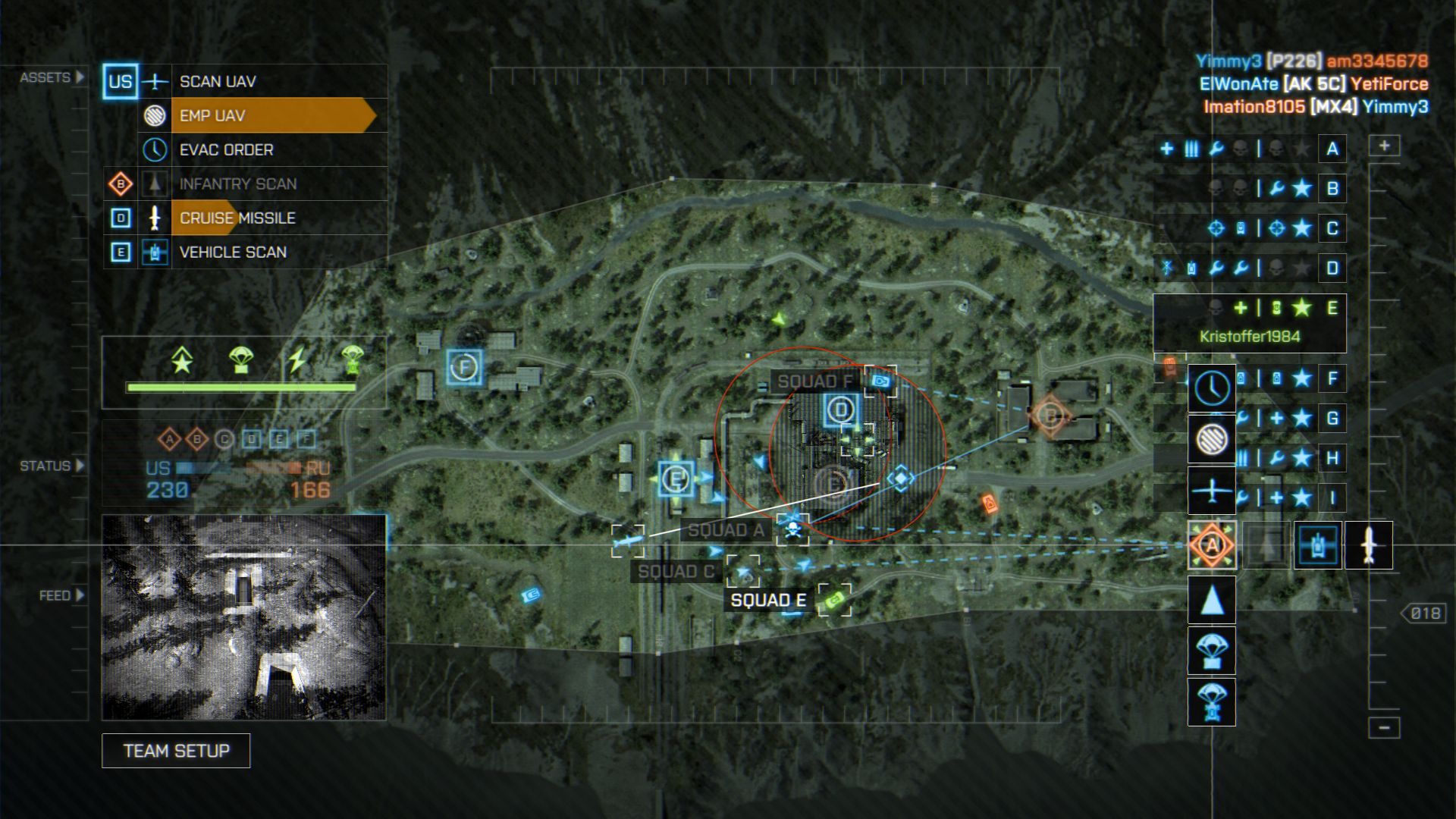 Commander does not seem to change the battle much, but it will keep you busy

Playing as commander is simplistic and you stay busy clicking. UAV scans are frequently placed over areas because they only last a few seconds. You can attempt to give squads orders, although few will actually follow them. So you watch the battle from above, look at the tiny picture-in-picture view of your squad leader trying to follow orders while his squad-mates camp on the hill, and wonder if this is it? The incentive to play as commander is practically non-existent because you feel powerless. At least with previous games, there was action on foot and influential assets that made the Commander crucial. In Battlefield 4, you are merely hoping that everything falls your way. There are some who will appreciate this role returning, but it lacks justification for its hollow execution.

Levolution is not just a gimmick, although its implementation ranges from impressive to brutally underwhelming. Skyscrapers collapse, roads flood and a destroyer crashes into shore. Shanghai is perhaps the most impressive, with a building collapsing to form a newly structured flag. Do you defend the support columns or destroy them? Flood Zone has a levee that releases water into the streets as players scramble on ledges to avoid the boats weaving between facades. These big events could happen within the first few minutes of a game or not happen at all. They improve map replay value and ensure you are thinking on your feet as the world changes before you. 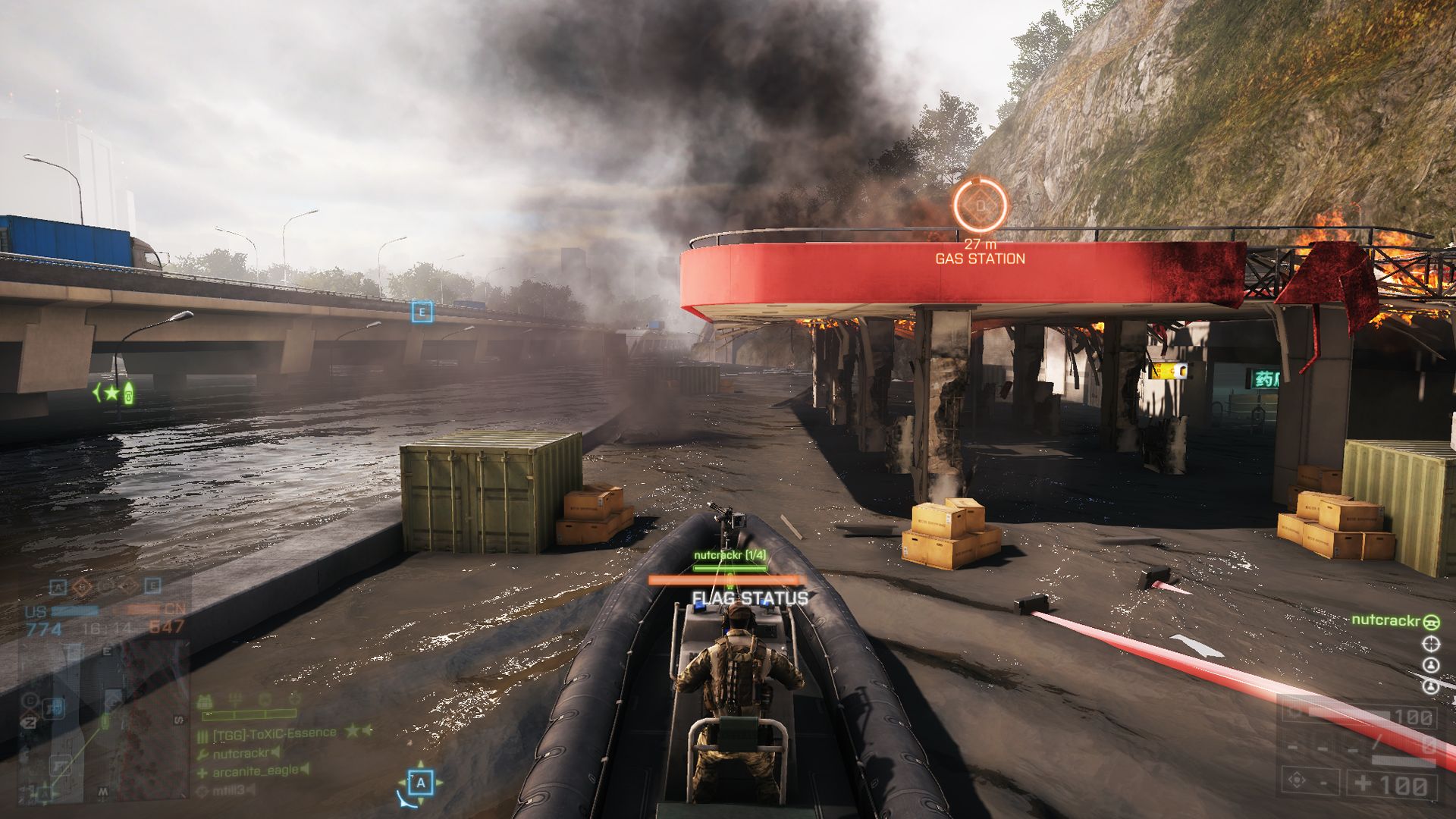 Other Levolution ideas are far less impressive. Golmud Railway sounds enticing from a Levolution aspect - surely gamers expected that a large freight train that would derail and cause massive damage to a nearby flag? Instead, IEDs are lazily placed across the map and can explode at the flick of a switch leaving shallow craters. Another weak Levolution event, seen in the map Dawnbreaker, occurs when two switches trigger a gas pipeline that collapses the road. More water Levolution ideas and weather effects would be welcomed because the tech there is already quite impressive.

Battlefield 4 suffers from countless issues within the multiplayer realm. Servers frequently crash and cause all players to lose progress. The Obliteration bomb will often disappear and the round might forget to end. You might be promoted half a dozen times when you hit a new level and get sent back to the previous level in the next match. Rubber-banding also returns, bringing back nightmares from Tehran Highway in BF3. Occasional network quirks mean you can die before your killer begins firing. Invisible walls prevent bullets from hitting their target. Sound mutes itself at whim and might even reverse direction just to increase the challenge. Conquest flags might appear contested when nobody is around. Even grenade icons persist after explosions. DICE’s games have always been buggy at launch, but never to this extent. Major issues should be fixed, but they will always be playing catch-up. Instead of balancing post-release, DICE are fixing game-breaking problems. BF4 is weeks behind its ambitions and may never fully recover.

Battlefield 4 is like a building demolition with a short length of detonator fuse. It’s loud, precise and achieves its goals. But with a short fuse, in this case the countless technical problems, it becomes impossible to experience without suffering injury or death. In a few weeks from now, when DICE have sorted out the major issues, players can enjoy the destruction without losing progress or crashing. There are a lot of good features within Battlefield 4, although not every change is a huge success. It is disappointing to see a game release in such a poor technical state when the underlying components are impressive. There is nothing quite like a multiplayer gunfight on the deck of an aircraft carrier while choppers fly overhead and the weather escalates, before the server crashes. Battlefield 4 takes the franchise to new heights but, just like the skyscraper in Shanghai, it occasionally comes crashing to the ground.

Prev123
Our ratings for Battlefield 4 on PC out of 100 (Ratings FAQ)
Presentation
92
Another excellent visual package despite an unnecessary desire to show-off in the single player. Some multiplayer maps lack visual consistency, but others are exquisitely detailed with plenty of destruction. Sound engine is simply astounding.
Gameplay
87
Strong shooting mechanics return. Weapons have good weight and power. Navigating areas still gets you stuck on small obstacles. Can customise load outs in single player and multiplayer.
Single Player
74
Attempts to bring some multiplayer structure to the campaign. Helps prepare players for multiplayer with building layouts and gadgets. Has a confusing story with a protagonist that does not feel like he belongs.
Multiplayer
87
Varied maps with more focus on vehicular combat. Exhilarating Obliteration mode keeps the action flowing. Infantry focused modes are a good change of pace. Levolution events are occasionally outstanding. Commander mode misses the target. Vehicle collisions need work.
Performance
(Show PC Specs)
CPU: Intel i5 3570k
GPU: Gigabyte 7950 OC 3GB
RAM: 8GB DDR3
OS: Windows 7 Ultimate 64-bit

60
Crashes, glitches, collision issues and sound problems. As the buggiest Battlefield game in at least 10 years, it makes a bad first impression and may never fully recover. At least it runs smoothly on Ultra settings.
Overall
81
Single player is little more than a flashy tutorial. Multiplayer receives several improvements and holds impressive value. Without the numerous technical faults, Battlefield 4 would be a great entry in the franchise.

Our Review of Battlefield 4
81%
Great
The Verdict:
"A gregarious online experience that demolishes itself and the competition"
Game Ranking
Battlefield 4 is ranked #384 out of 1660 total reviewed games. It is ranked #39 out of 158 games reviewed in 2013.
383. Zone of the Enders HD Collection
PlayStation 3
384. Battlefield 4