Call me old-fashioned, but I think roguelikes are one of those genres that just shouldn't mix – at least, not without some serious care and preparation beforehand. Oh, it always starts with some indie auteur designer breathlessly describing his killer idea to his mates over the share house table, eyes ablaze with visions of replayability on a shoestring budget, but more often than not the finished product just ends up crippled by compromise; an uncomfortable marriage where the colourful variation and depth of roguelikes is toned down by the sheer monumental task of implementing that much complexity in a game that isn't just an arrangements of tilesets and a primitive text parser. Still, lightness of roguelike elements aside, Spelunky was great, wasn't it? Eldritch could be quite brilliant, especially once you hear about its inspirations and start salivating a little bit.

Having the game described to you, you might get an inkling that its premise was largely assembled by having the developers read out a list of their favourite games in the world and combining them together, Mad-Libs-style. Consequentially, it's a first-person stealth-action game with its lineage in the Looking Glass Studios stable – particularly the old Dark Engine juggernauts, Thief II and System Shock 2 – which includes roguelike elements, naturally, cube-centric environments of the sort Minecraft wrenched into the limelight, and just the faint whiff of Dishonoured about its movement system from time to time. Oh yes, and the presentation takes more than a few cues from the works of H.P. Lovecraft, presumably because somebody had been playing Quake at some point. But will this be a mangled train wreck of conflicting design philosophies, or a seamless weave of brilliance that was fated to be? 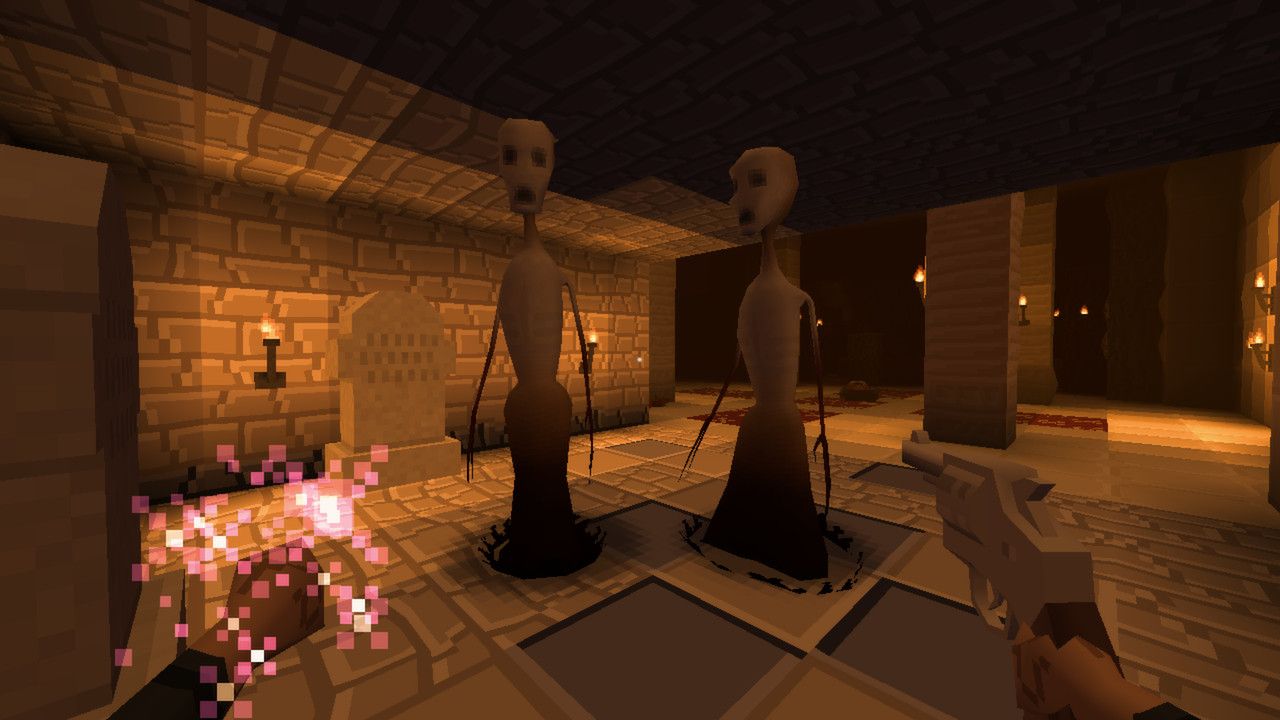 You can tell straight away what it won't be praised for: storytelling. Eldritch dumps you straight into the hub world – a cavernous occult library with mysterious floating books – with nary an introduction to itself, and lets you explore the place, uncovering the secrets of the world and your purpose here as you progress through the game. Conceptually I think this could have been quite effective; a way to let players submerge themselves in the plot as much as they wanted, having nice little asides nestled away in the pages of the many floating books that hover above the library's empty tables, but it gets let down by a severe lack of actual writing to fill their pages. Four paragraphs detailing the history of the library get spread out throughout its echoing space, repeated countless times throughout the many books, and four entries from the journal of an explorer are distributed throughout the game at various fixed points. It's all very sparse and, in the case of the journal entries, deliberately ambiguous. Eldritch sort of implies that you are really just part of a big cycle, and it's possible that the explorer in question is just a previous incarnation of yourself, but ultimately the few lines of text are just a flimsy framework to keep the gameplay from spilling out into the realm of meaninglessness. This is turning out quite a lot like a roguelike already, isn't it? I can't be the only one here haunted by visions of Nethack's expository text screen.

Blast the story, then, eh? Three expectant pedestals, four unearthly worlds located within the pages of the library's books, three mysterious glowing objects containing the disembodied souls of the most famous of Lovecraft's nasties: Dagon, Nyarlathotep and Cthulhu. You must use your wits and whatever you can loot off the ground to shoot, stab, sprint and sneak your way past the entire population of Innsmouth in the pursuit of your goals. Off you go, matey. 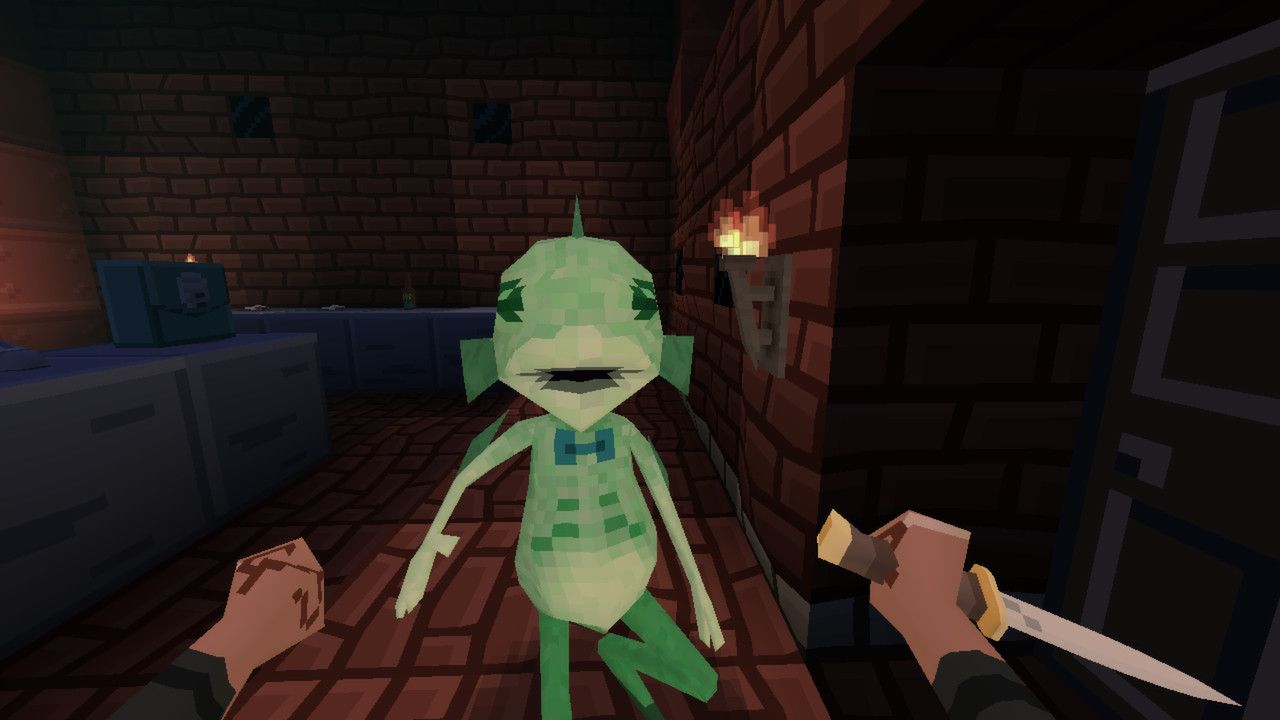 Four levels doesn't sound like much – and it isn't, believe me – but the game's saving grace is the touted roguelike world generation, which promises that tasty dose of replayability and – to a certain degree – delivers. Essentially it's the same technique Spelunky used, where for each floor the game takes a big pile of pre-fabricated rooms, shuffles them around and slots them neatly into a four by four grid. It's not quite as exciting as the approach seen in more traditional roguelikes, but to the game's credit it's surprisingly effective at stitching things together such a way as to make each play-through feel unique, creating non-linear environments with plenty of paths, wide-open spaces, narrow corridors and cramped crawl spaces. My only sticking point is that occasionally the game drops the ball and generates a level that's near-impossible to progress through without blasting a hole somewhere in the terrain, jump-starting a tiresome scavenger hunt for a bundle of dynamite in the rooms you just passed through. It only happens once in a blue moon, though, so I wouldn't worry about it too much if I were you.

Getting down to the actual business of traversing Eldritch's worlds, you find a mostly solid experience. On the face of it, all is well: navigate the level using the map and (if you have one) a compass, sneak around or confront your foes, pick up upgrades and weapons along the way. Spells can be obtained by consorting with stone statues, allowing you to briefly turn invisible, unlock doors, or teleport at will, for example One interesting point to note is that spells – and many upgrades – will, upon being used, consume your artifacts, the currency of choice in the world of Eldritch. Quite a stroke of clever design, you see, because it forces the player to consider every use of their power carefully. Not only does it drain a limited resource, but every cast of a spell rests heavily on the player's mind, knowing that a dungeon store selling a revive kit could be just around the corner. At least that would be the case, were it not for the one tiny problem I've been keeping out of the limelight that sits on the gameplay like a mouse dropping on an otherwise clean dinner plate. 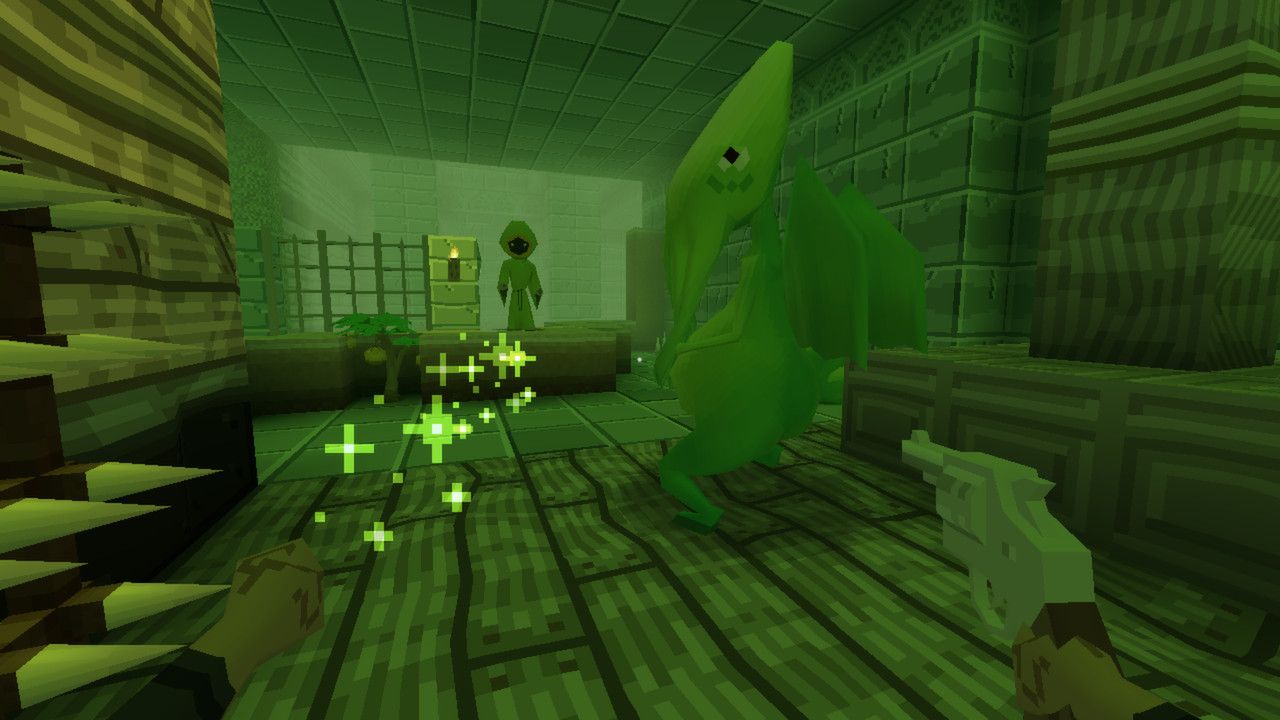 Eldritch is just too sodding easy. Not 'easy for a roguelike', or 'easy for an indie game that doesn't have to cater to a widespread audience', both of which are petty complaints that could be deflected, but the rather more serious 'it's just too easy, period'. Blame can mostly be pinned on the yawning chasm of power between you and your foes. You only have three hit-points to start with, meaning that you can still be easily killed if you make a silly mistake, but your basic Eldritch player can sprint insanely fast without any fear of running out of stamina, climb ledges in an instant, bunny-hop at Mach 3, slide under obstacles and, with the acquisition of just a titchy pocket knife, carve up almost any passing monstrosity in a matter of moments. In a first-person shooter I would have adored a system of motion like this: it feels fluid, fast, unsullied by contextual movement or extensive animation, and indeed I spent a shameful amount of quiet thinking time just aimlessly parkouring around the hub library. In a game like Eldritch, though, such a level of capability causes all sense of vulnerability to swan-dive into an empty swimming pool. This condition only worsens when you begin to understand the mental extents of your obstacles. 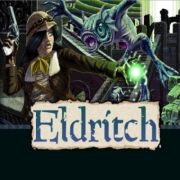