Time to set sail with a new era for the franchise

But it’s not all smooth sailing out there. You’re a pirate, after all, and the game’s major source of income is attacking ships. The game world is full of vessels floating around, some patrolling and some carrying goods to their destination. Using a telescope, you can zoom in on nearby ships and get an idea of their strength, as well as goods being carried. You’ll need the goods you plunder from these ships to upgrade the Jackdaw’s own strengths and defenses. Having picked a target, the game plays out very similarly to AC III’s mechanics. Steering your ship into position and firing is exciting, and the naval warfare seemingly never gets old, as you try to outmaneuver the bigger ships and go for the killing blow.

Once a ship is incapacitated, you can board it. This also plays to the very exciting pirate instincts of using a swingrope to jump onboard and go hand to hand with the enemy. Depending on the size of the ship, you’re tasked with defeating a certain number of crew members and taking out specific officers or blowing up ammunition reserves. Once the ship is taken, you get the option to repair Jackdaw, reduce your wanted level, or send it to Edward’s fleet. That brings us to one of the many gameplay elements that have made the transition to naval side. You now gain wanted levels only at sea, as on-land now your only worry is escaping the immediate restricted area and becoming anonymous. Getting rid of the wanted level is done via option described above, or by visiting a town and paying it off. Should you remain wanted, hunter ships will appear on the horizon, specifically to take you out. 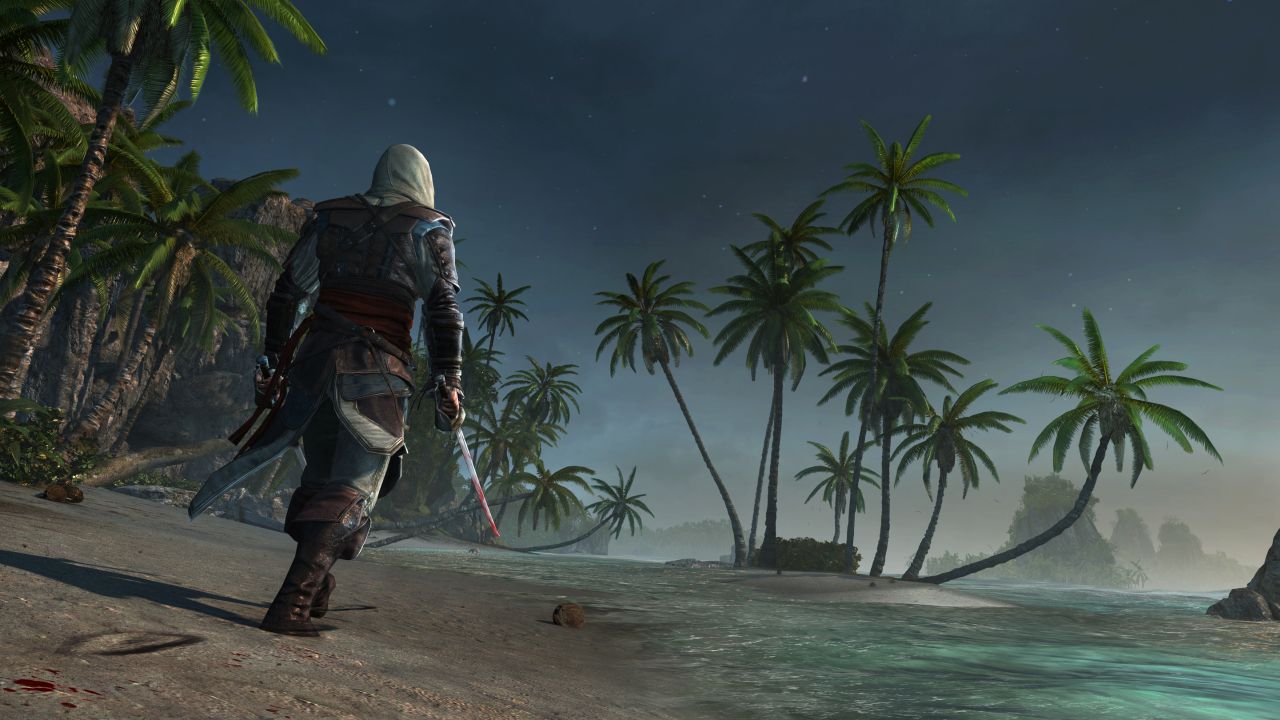 Similarly, enemy forts are now naval installations instead of land missions. The world is divided into segments, each controlled by a fort. Taking over these forts reveals all naval locations of interest in the region, similarly to performing a sync on land. Your job is to circle around and take out the reinforcing walls and towers with your cannons, while dodging enemy fire and any other ships that happen in the area. Once all towers are down, you once again must engage in melee combat as you kill enemy officers and eventually take control of the war room. It’s a two-part naval combat/melee combat experience, much like robbing ships.

Side activities are also present. You can go fishing by harpooning whales and sharks in a fairly challenging and exciting minigame, or go underwater for the first time in the franchise. These underwater exploration sections occur at shipwreck locations, where your goal is to collect treasure while hiding from sharks and watching your oxygen level. It’s exciting and different, giving a new dimension to the gameplay, though nothing particularly revolutionary. When you’re simply sailing about, you can also pick up crew members and loot that floats around. The size of your crew is supposed to be important in the game for assaulting enemy vessels, but that requirement never materializes. In addition, the game also throws storms at random. These weather events introduce strong winds, hurricanes and huge waves that can damage your ship if you don’t avoid them. It’s really quite something to be engaged in a tense firefight against an enemy fleet in the middle of a raging storm, or trying to harpoon a huge whale as lightning strikes spark all around. 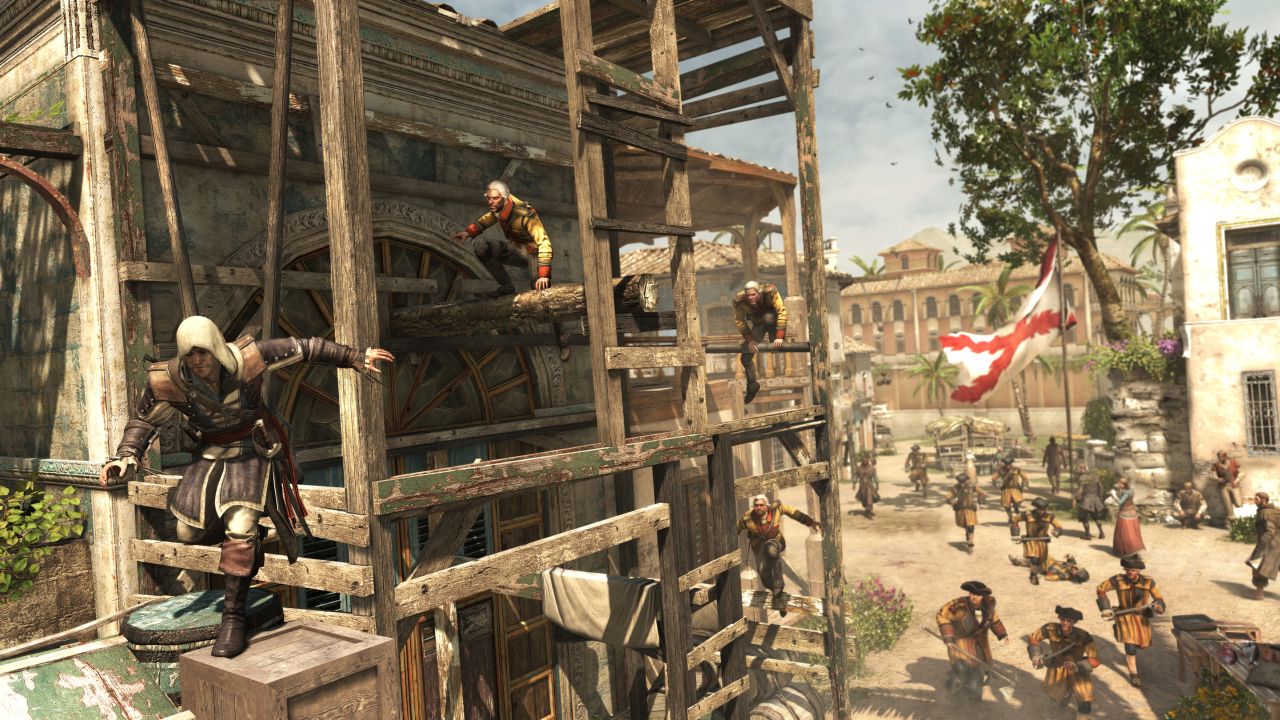 The abovementioned option to take captured ships into Edward’s Fleet plays into another small activity. Like the assassin recruitment in previous titles, your fleet can be tasked with delivering goods across the globe. All ships you have in your possession can be send on trade assignments, earning you extra coin as they go and slowly expanding the amount of trade routes available. It’s a decent distraction, but for some reason one that requires the players to be online and signed into Uplay.

With a switch to the Caribbean setting, it’s not only the gameplay that benefits. A major and culturally popular setting of piracy is presented very well in Black Flag. From character costume design to the era-accurate dialog, the game is a joy to experience. Voice acting is great, and so is the thematic soundtrack. Some of the natural vistas and scenery that you discover across the islands are also very lifelike. From hidden caves to tall waterfalls, underwater wrecks and chaos of a storm, the title looks good with a respectable amount of draw distance. There are some technical issues, mostly with framerate hiccups and missing audio, which dampens some of the excitement. But these problems aren’t frequent enough to seriously detriment the experience. 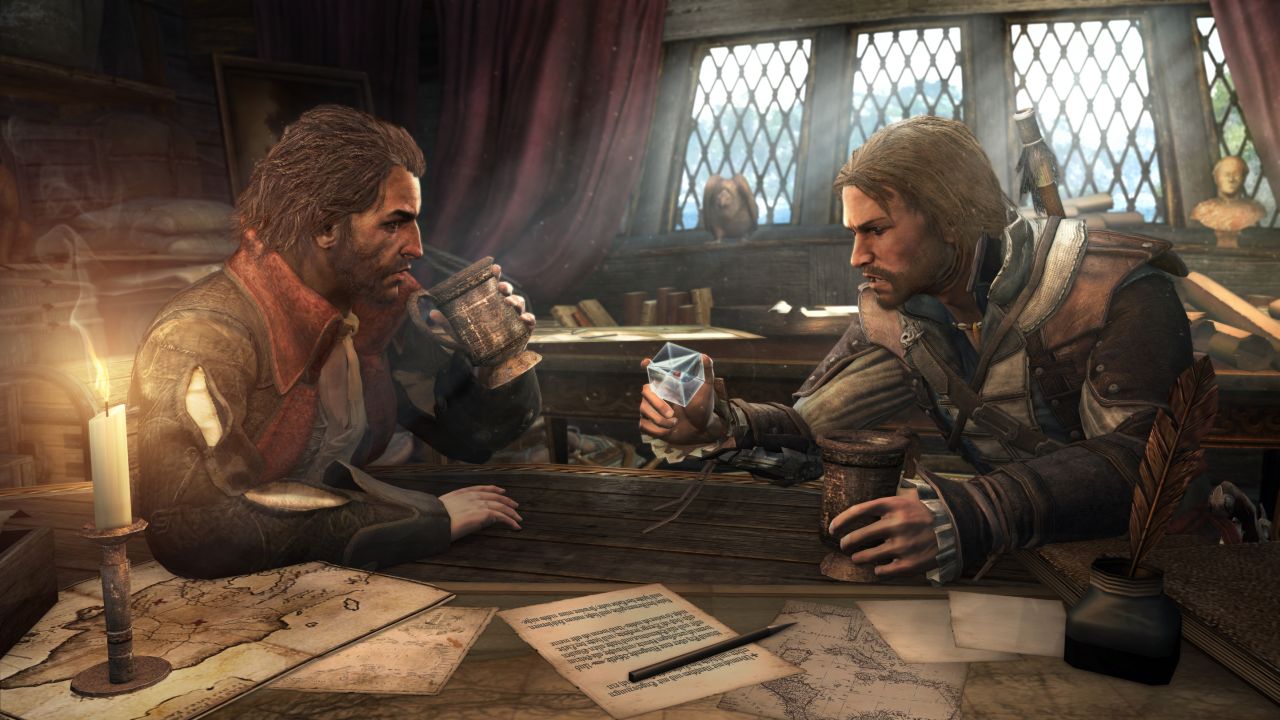 In Multiplayer, the developers have played it fairly safe. The most pressing question you might have is if this grand naval combat is available with friends, and sadly it is not. Instead, we get more of the familiar cooperative and competitive modes from previous games. There’s still the deep character customization, both visual and through perks and abilities system, alongside the staple XP-based level progression. There aren’t any new modes, and all competitive modes - Wanted, Deathmatch, Assasinate, Artifact Assault, Manhunt, and Domination - make their return, with little change, not that any is needed. The cooperative Wolfpack mode has been expanded however; you must play through 25 sequences on any of the 8 maps, with each sequence presenting a unique challenge to complete. This is still a great mode with a moderately competent team on your side.

The Discovery mode of Wolfpack lets you play through all sequences with friends only to learn the ropes, before jumping into the public games, called Unleashed. During matches, the special objectives range from chest defense, to synchronized kills, to a new infected mode. All of these tasks must be competed intermittently with the classic objectives of simply hunting down AI targets for maximum kill points based on stealth and style. It’s a slightly tweaked and expanded experience that flows better than before, but a bit disappointing that there are no wholly new modes. 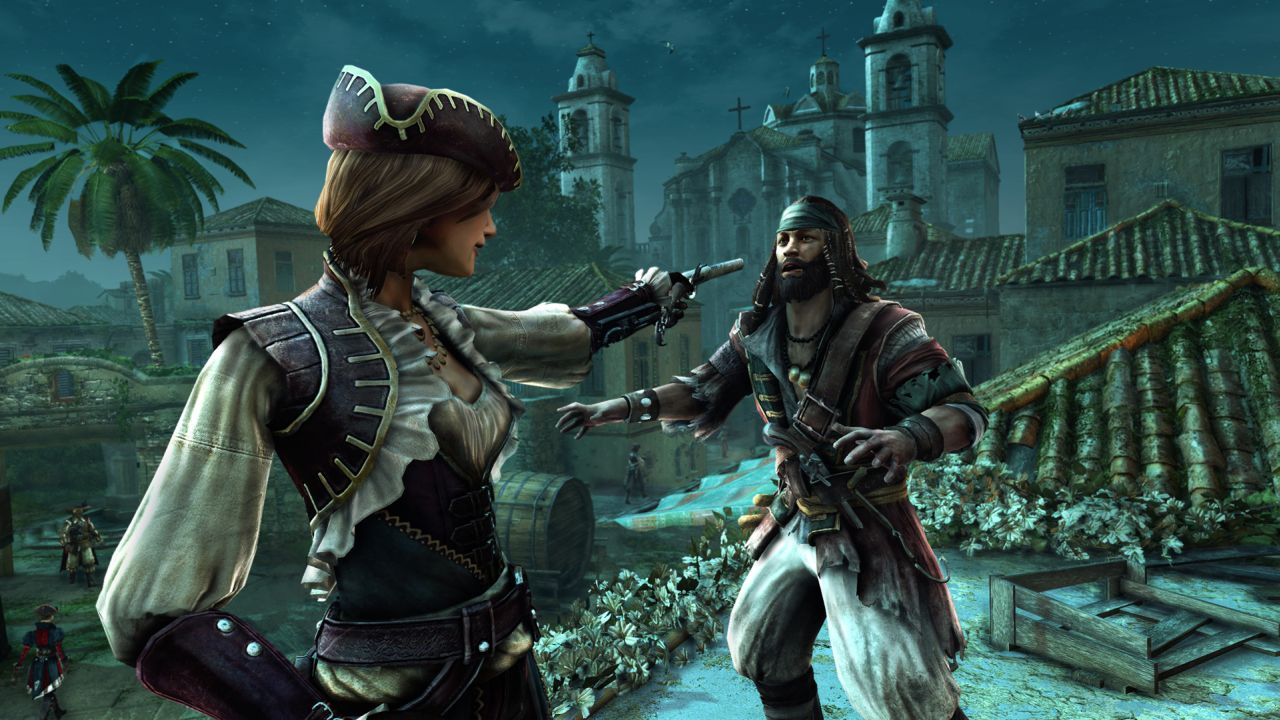 One completely new aspect is the Game Lab. Put simply, it’s a custom multiplayer playlist where users are given the chance to tweak nearly every setting of every game mode. Adjusting time limit, ability buffs, score multipliers, disallowing of perks, etc are all up for tweaking. You can save it for private competitive play, or share with the world for others to try your modifications. Game Lab is essentially allows for custom matches, something that is often seen in shooters. It’s a nice addition, but it doesn’t allow players to complete challenges, increase their ladder rank, or earn full XP. But, for some friends looking to mess around, it’s a good option.

Assassin’s Creed IV: Black Flag brings innovation to a series that has plateaued over the last few years. The core mechanics are still the same, sure, such as stealth, eavesdropping, assassinations et al. But with the huge focus on naval exploration and combat, there is finally something completely new to look forward to. Fans of the pirate culture will be particularly thrilled with this well crafted, and well presented period piece. Although some technical issues are present, they don’t shake the solid overall experience. Multiplayer modes have been tweaked, but lack of any true new options is a bit disappointing. With that, Assassin’s Creed IV: Black Flag is a great entry that sees the series rise up from the depths back to near excellence.

Prev12
Our ratings for Assassin's Creed 4: Black Flag on PlayStation 3 out of 100 (Ratings FAQ)
Presentation
86
Between mighty storms and dense island jungle, the game features some enticing visuals. Voice acting and attention to detail are also impressive.
Gameplay
85
The naval combat and exploration strikes a near perfect balance. Storming enemy ships never gets old. New tools to help in stealth add variety to the usual land based gameplay.
Single Player
87
Tons to do and explore, diving up the gameplay into smaller sections via the islands helps alleviate any repetition. Edward's tale is engrossing, and so are most of the characters we meet along the way.
Multiplayer
80
The formula still works, but adding the ability to customize game modes and slightly adjusting the cooperative experience are not exactly groundbreaking changes.
Performance
75
The game struggles with framerate at times, some glitchy animations still exist and audio cuts out now and again.
Overall
85
A breath of fresh ocean air that the franchise has been waiting for with increasing urgency. Assassin's Creed 4: Black Flag is a great adventure, even with some shortcomings, and one that sets the bar high again for the future of this series.