At least succeeds with charm and faithfulness to the Marvel franchise

The LEGO video game series has existed for some time now, taking established franchises like Star Wars, Harry Potter, Pirates of the Caribbean, and Batman and giving them their own special brand of makeover. While people were long skeptical of the LEGO series, it has managed to win over audiences with charming humor and creative gameplay that appeals to young and old alike. LEGO has always managed to stay faithful to beloved source material, while at the same time poking fun at the franchises they borrow. The latest effort in the franchise is LEGO Marvel Superheroes, where LEGO combines the forces of the Fantastic 4, the Avengers, and the X-Men creating the most complete list of Marvel properties in a video game since Marvel Ultimate Alliance 2. LEGO Marvel Superheroes succeeds, at least for the most part, in the way that many LEGO games do, with its charm and faithfulness to the Marvel franchise.

LEGO Marvel Superheroes is hardly a game that needs a sound plot throughout as its target audience of young adults aren’t likely to quibble with the poor explanation given as to why these heroes are working together. Just the same, there seems to be little motivation as to why Mr. Fantastic is paired with Wolverine or why Thing is wrecking shop with Captain America. For a world that involves the evil-doings of Magneto, Dr. Doom, Loki, and Galactus, the narrative is rather dull throughout. Marvel Superheroes funnels you through the story with a selected group of heroes that isn’t always the most fun to play with; the levels with Hawkeye and Black Widow are particularly dull. As there seems to be little reasoning for the heroes selected, it is confusing why LEGO didn’t simply let players choose which characters they wanted to play as. 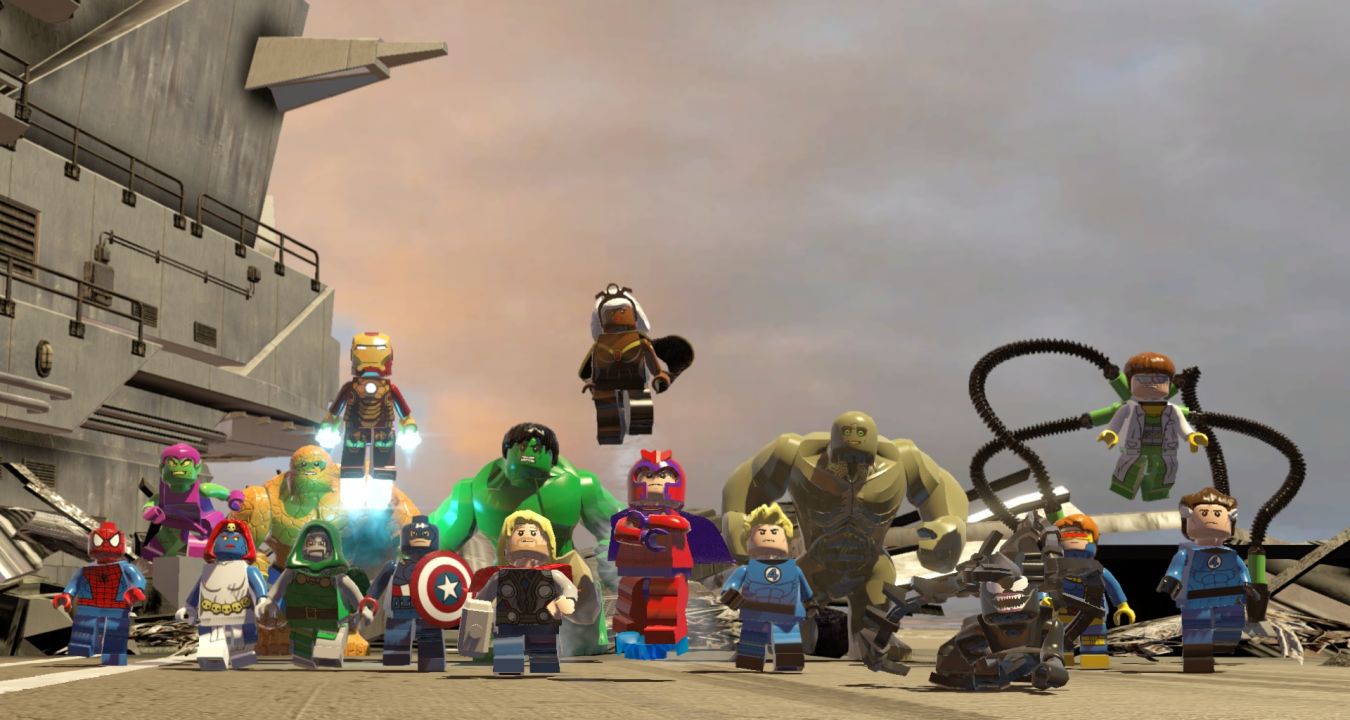 The writing is also a mixed bag. While some of the jokes land with the same style points as other LEGO games, some are blatantly stolen from the movies themselves, like when Iron Man calls Hawkeye, “Legolas”. For that matter, most of the characters in the game are clearly based off of the recent films and properties, rather than paying homage to the comics themselves. The Avengers are near replicas of their film form whereas Spider-Man and the X-Men seem to be based on their 90’s cartoon runs. That beings said, the writing in LEGO Marvel Superheroes still delivers at points. The jokes for Abomination and Hulk really hit home, especially the duo’s epic fight sequences. There are chuckles throughout the game, but they don’t feel like they are as fast and loose as other titles.

The same could be said for the gameplay. LEGO has often combined a mix of puzzles and combat and Marvel Superheroes continues the trend. Sometimes the gameplay feels dead on, with character like Iron Man and the Hulk being tons of fun. Ranged characters feel great as you can watch your scores quickly multiply while pegging enemies from a distance. Heavy brawlers like Thing and Hulk are also a good time, wreaking havoc wherever they go. It is the characters in between that lack creativity, like Wolverine or Jean Grey. These characters grow boring quickly as a series of combos are their only attack. This fighting style leaves you simply mashing the attack button over and over as you slowly work your way through enemies. 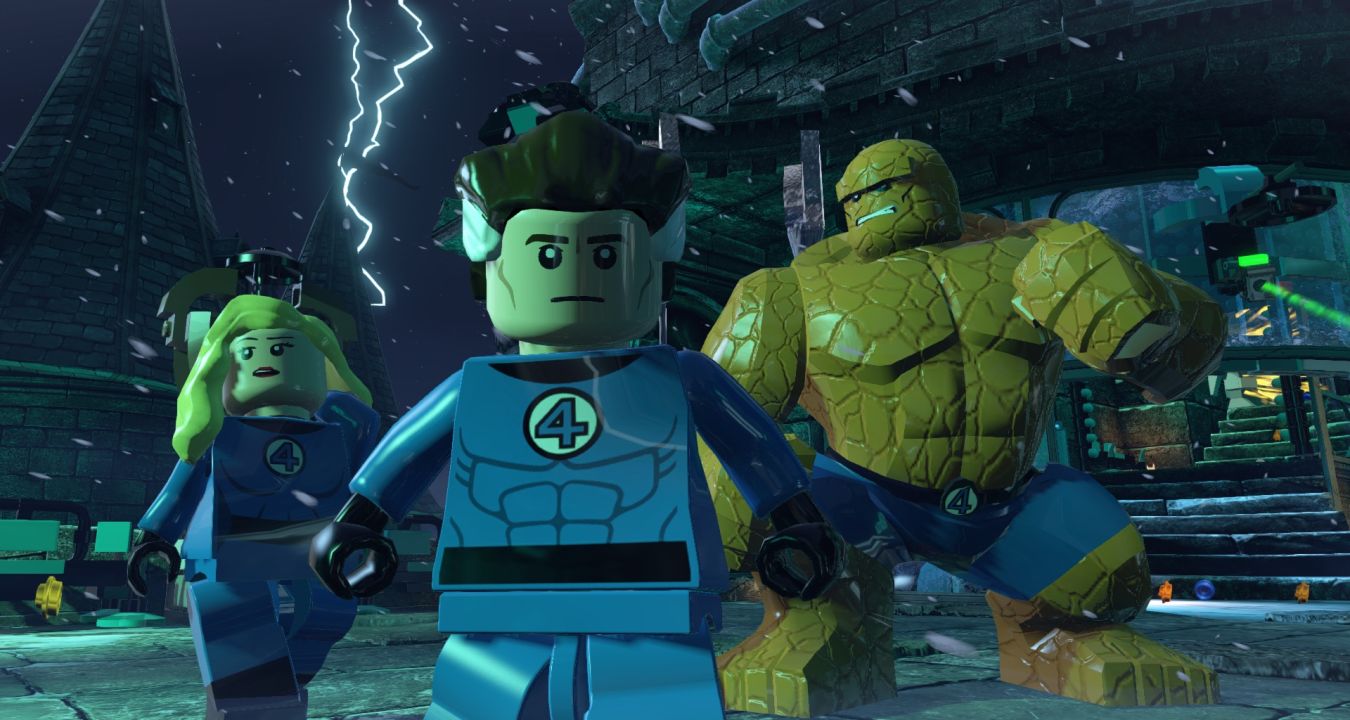 When you’re not fighting in Marvel Superheroes, you will be working through the puzzle sections of the game, clearing obstacles and opening blocked paths. Sometimes these puzzles are fun and move even quicker when being shared with a friend who can help switch through the required characters. These puzzle sequences are very similar to previous LEGO titles where different characters with different skills are required to get through certain spots. The level design does have a few hiccups where the game fails to communicate which character and what skill is needed to progress. This will lead to wasted time, simply traversing a level back and forth, trying to decipher what the game is telling you. Some of the simple platforming the game requires is also frustrating, as poor angles leave you constantly missing the mark. These sections kill much of the momentum that is built, effectively derailing the experience at times.

While puzzles can go a little faster with two players, minimizing the switching between characters, the split-screen in Marvel Superheroes is decidedly awful. Based on position in the level, the line in the split-screen will rotate, trying to help players with perspective. This isn’t a bad idea, but when you are attempting difficult jumps or trying to aim for precise points on the screen the rotation of this line feels far from seamless. Playing cooperatively can help some of the puzzles speed along, but certain parts of the game are designed for only one player, meaning there are moments where one of the two players will be left standing around with nothing to do. Instead of having gameplay change to accommodate a single player or cooperative experience, the game remains the same making neither experience completely enjoyable. 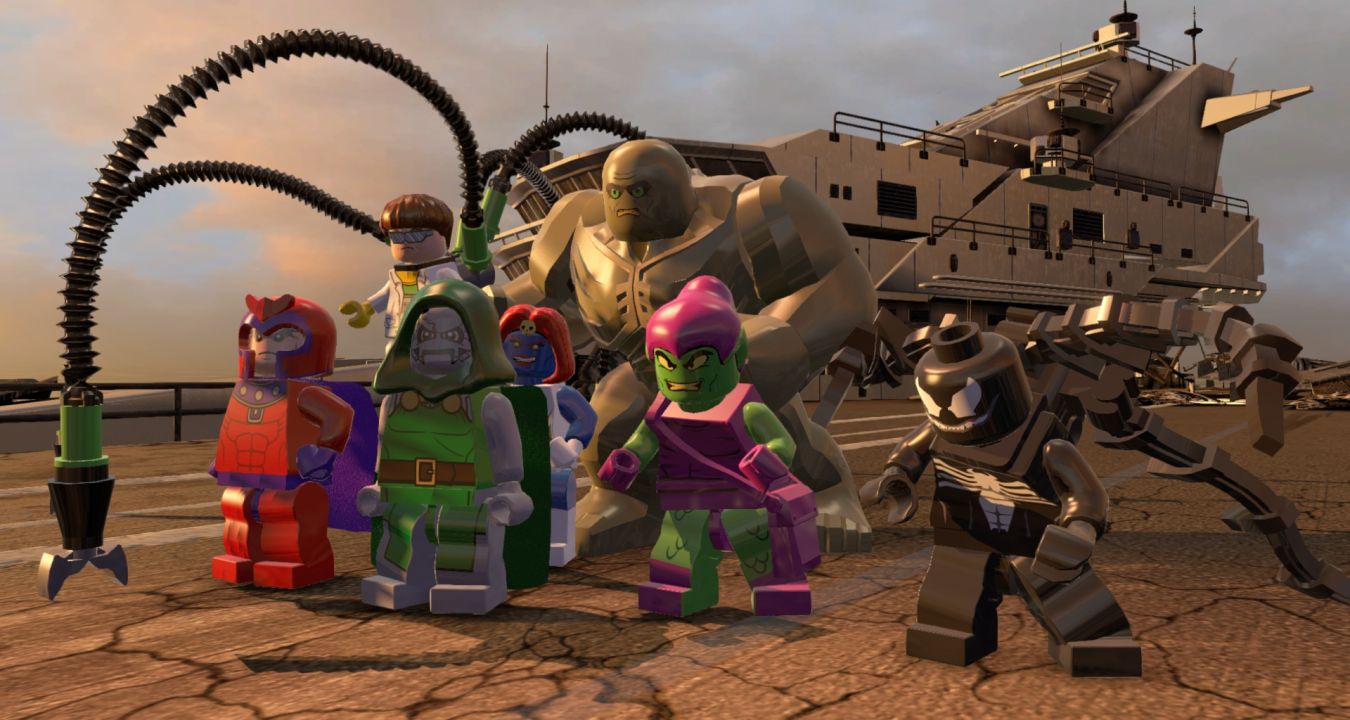 Each level of LEGO Marvel Superheroes is filled with collectibles and secrets, all of which can unlock characters and costumes in the game. In between missions players can run around an open world element, exploring the streets of New York and help its citizens with mundane tasks. These side missions aren’t very engaging and often feel like busy work that is required to reach that games’ bonus level. For completionists, it is a long haul and most of what awaits is trivial and boring. The game begs for a challenge mode in which players can take on waves of opponents or use the gameplay exemplified in the story to solve puzzles. Instead you will spend hours following a mini-map, trying to find a lost child.

LEGO Marvel Superheroes feels like a LEGO game. The art style is much like the titles that came before it, the music is derivative of its source material, it is what we have come to expect from the franchise. It seems unfair to say that the LEGO formula has become rote but it does feel a little too tried-and-true at this point, as if each title has become the same game with a different coat of paint.

Marvel Superheroes is not a bad game. In fact, elements of it are quite good. It still feels exhilarating to see Spider-Man and Iron Man team up, something that is effectively lost forever on the big screen, and occasionally the game delivers on the laughs and thrills one would expect from the union of two established properties. However, this melding of franchises seems to egregiously favor Marvel, as LEGO appears to have almost no breathing room to work with. What that equals is a game that slavishly follows formula and gets stuck in the mud of the property it is adapting. There is still the flavor of the LEGO games, but it plays like it was put together with an instruction manual. Fans who are waiting for a Marvel experience that really explores the chemistry of the multiple established franchises will have to keep looking.

Our ratings for Lego Marvel Super Heroes on Xbox 360 out of 100 (Ratings FAQ)
Presentation
73
Everything about LEGO Marvel Superheroes feels derivative and cookie-cutter. The formula works, but nothing is new.
Gameplay
71
Occasionally the game hits it stride, sometimes its poorly explained puzzles leave you walking in circles, on the whole it is mediocre.
Single Player
75
The narrative is bland, especially for all the great characters the game boasts, but the LEGO charm is still alive and well in Marvel Superheroes.
Multiplayer
64
A rotating split-screen can be very frustrating, and parts of the game leave a second player waiting around with nothing to do.
Performance
81
The occasional long loading screen can be annoying, but the game does a good job of keeping things moving along with no technical hiccups.
Overall
74
The formula still works, which is why these games continue to get pumped out every year, however it seems like LEGO is just mindlessly working their way through big-name franchises without much creativity. Something involving so many classic heroes should be better than this. 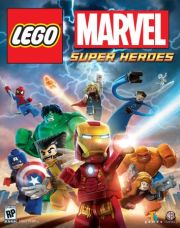