Sometimes all you need is a good story.

Stop right there. We've hit another quantum branching point in your life. Think of it like one of those tattered choose-your-own-adventure books that the school library stockpiled in their hundreds, except instead of flipping back and forth through the pages to see if you're about to be killed on the next paragraph, you're making a nice safe decision from the comfort of your chair. So, did you play the original Stanley Parable? No? Go download and play it, then. It doesn't cost anything, after all. Yes? Then you already know what to expect. You are now fully informed about The Stanley Parable's standalone release. Furthermore, if you choose to follow Millie into the abandoned factory, turn to page 67. That's just helpful advice, by the way – I've long since forgotten what book it applies to. 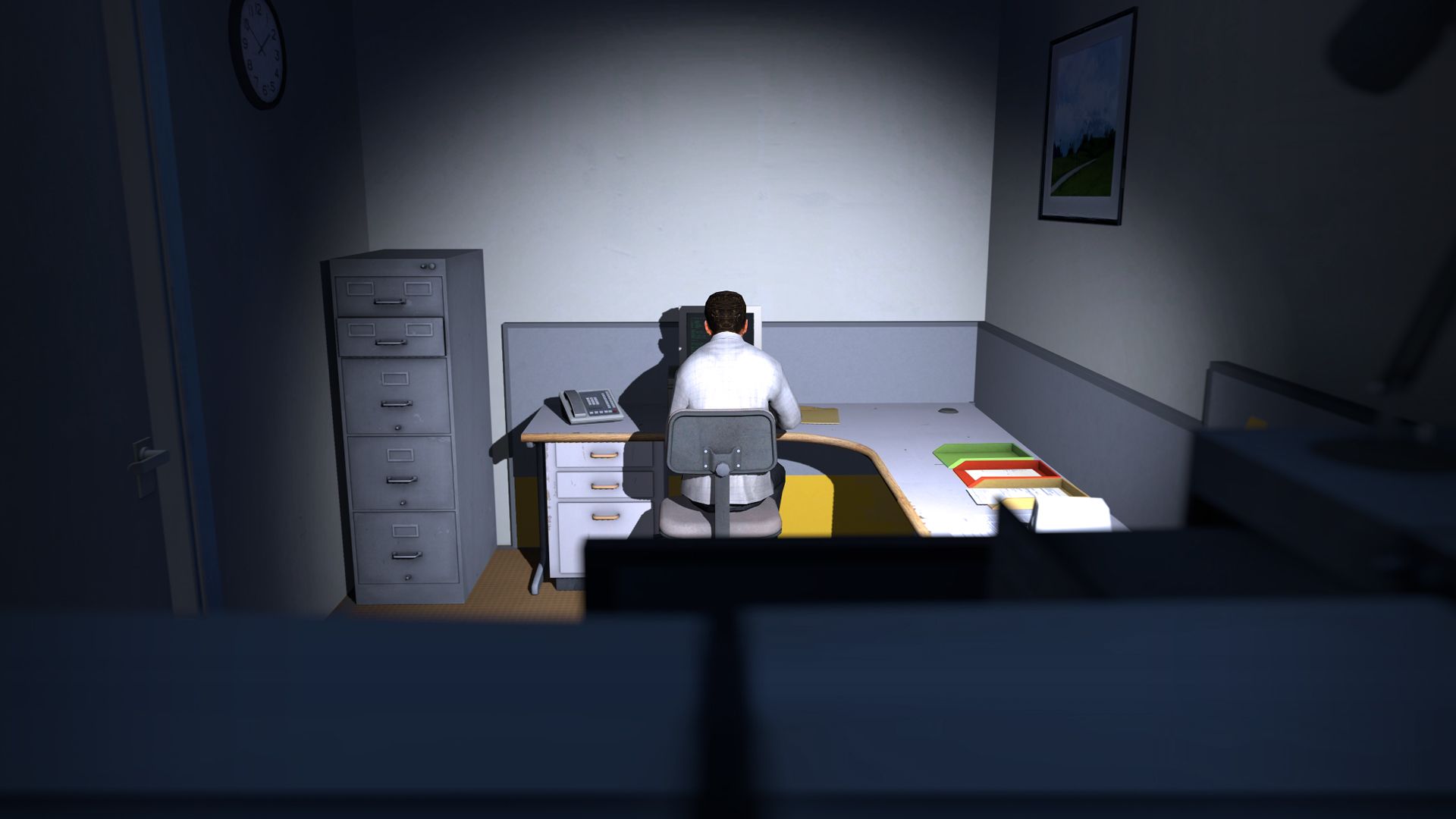 Oh, very well. For those that can't be bothered, The Stanley Parable was a smallish Half Life 2 modification from 2011 in which you walked around some badly-proportioned corridors for about an hour. More seriously, it was a marvellous little deconstruction of videogame storytelling buoyed by charming writing and a narrator with a voice like a warm mug of breakfast tea. Pretentious? Maybe it was, but I'll welcome pretentiousness with open arms if it means putting a smile on my face with nothing but some ugly level design and somebody vocalising amicably into my ears. Now we have this remake, or reboot, or whatever you wish to call it, which is essentially more of the same. Thankfully it's big and richly-detailed enough to get by unscathed, with its basic structure mirroring its humble ancestor just enough to make those that played it go 'ahah, I know this bit' every now and then.

Serendipitously, the mention of choose-your-own-adventure books might have been more relevant than I initially thought, because that's what The Stanley Parable most closely resembles mechanically: a set of branching choices slowly spreading out into various fascinating non-canon endings and one slightly less interesting canon one. Calling it a 'game' is a bit much – to the point where it's quite necessary to enclose that word in a nice pair of sterilised quotation marks – especially considering that the extent of your actions is walking around and occasionally clicking on things. Within The Stanley Parable you won't find combat, puzzles, platforming, exploration or, in fact, anything resembling challenge or adversity whatsoever. It's possible to die, admittedly, but it's never implied that this is a state of failure: dying is simply another ending to Stanley's tale, as acceptable and fitting as succeeding. I would be at the forefront of any group of advocates calling for a reclassification to something more appropriate – interactive fiction, perhaps – were it not for the fact that The Stanley Parable has inflicted me with a desperate desire for more of its ilk, and if that means sneaking them into the industry under the guise of videogames then so be it. 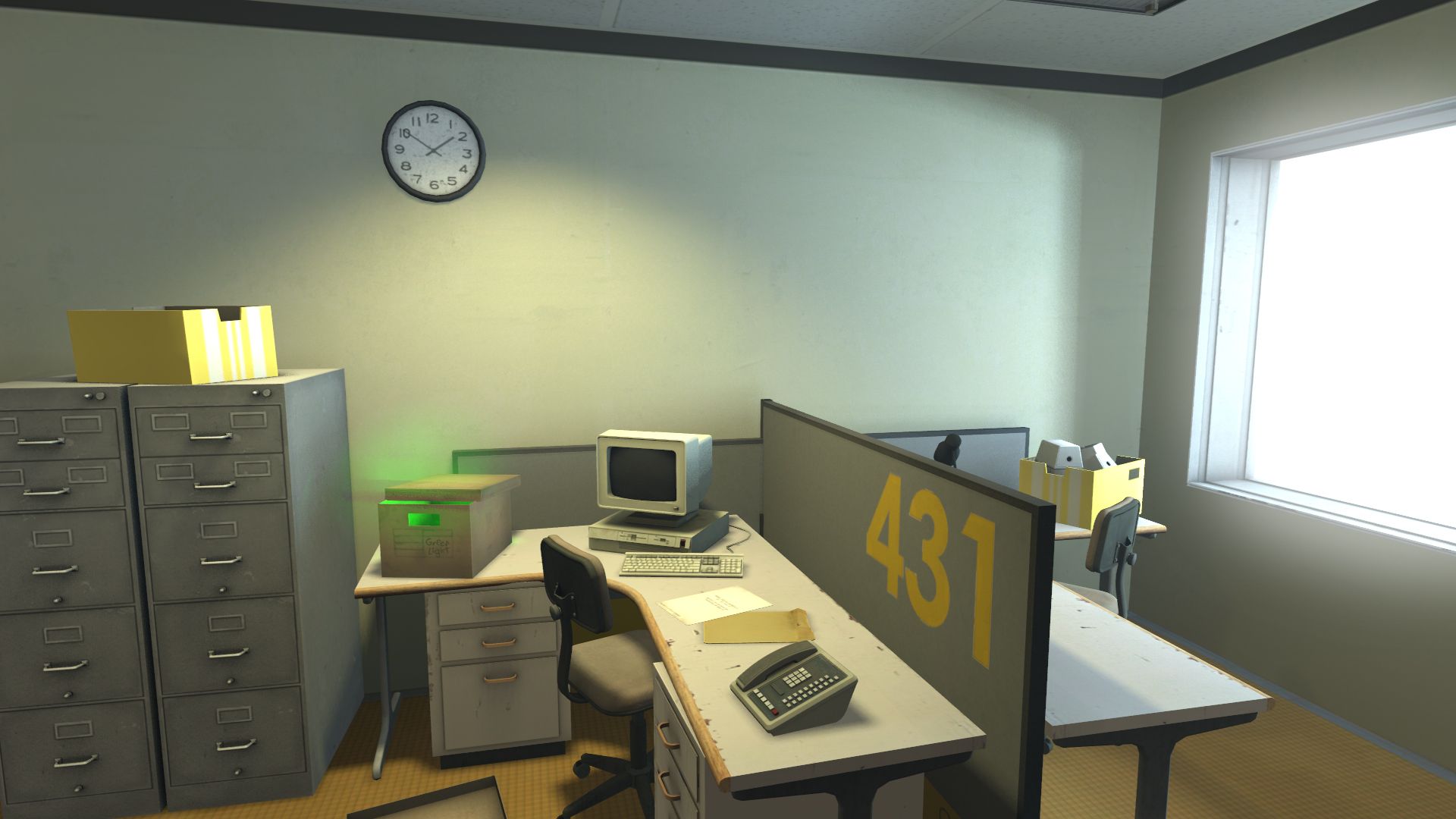 It's a mark of The Stanley Parable's unique formula, then, that it couldn't possibly become a book or a film or any other work of fiction devoid of videogames' usual characteristics. Not just because of the story, which splits and merges and doubles back on itself occasionally, but also because of the way it constantly holds a warped mirror up at everything we've come to accept as normal in games, to the point where casting it in another medium would be entirely missing the point. Every playthrough of the game starts exactly the same: Stanley – the faceless worker drone in an office suddenly devoid of life – breaking away from his menial tasks, poised on the threshold of the room with a cascade of stories ready to unfold. From there, what actually happens is up to the player. It starts off with the simplest of decisions – whether to take the left or right in a pair of open doors – and snowballs into sheer, maddening brilliance.

This is all very well, I'm sure you're thinking, but unless something actually interesting happens as a result of these choices then all you're playing is an extremely annoying piece of commentary on the meaninglessness of life. The Stanley Parable understands this, naturally, and is consequentially stuffed with some of the best offbeat writing this side of a Douglas Adams novel. Referring to specific examples is a crime I will not exact upon you – mostly because the entire experience is essentially spoiler-worthy material, and spoiling it defeats its entire purpose – but I shall endeavour to conjure up the general atmosphere through the inferior medium of text. 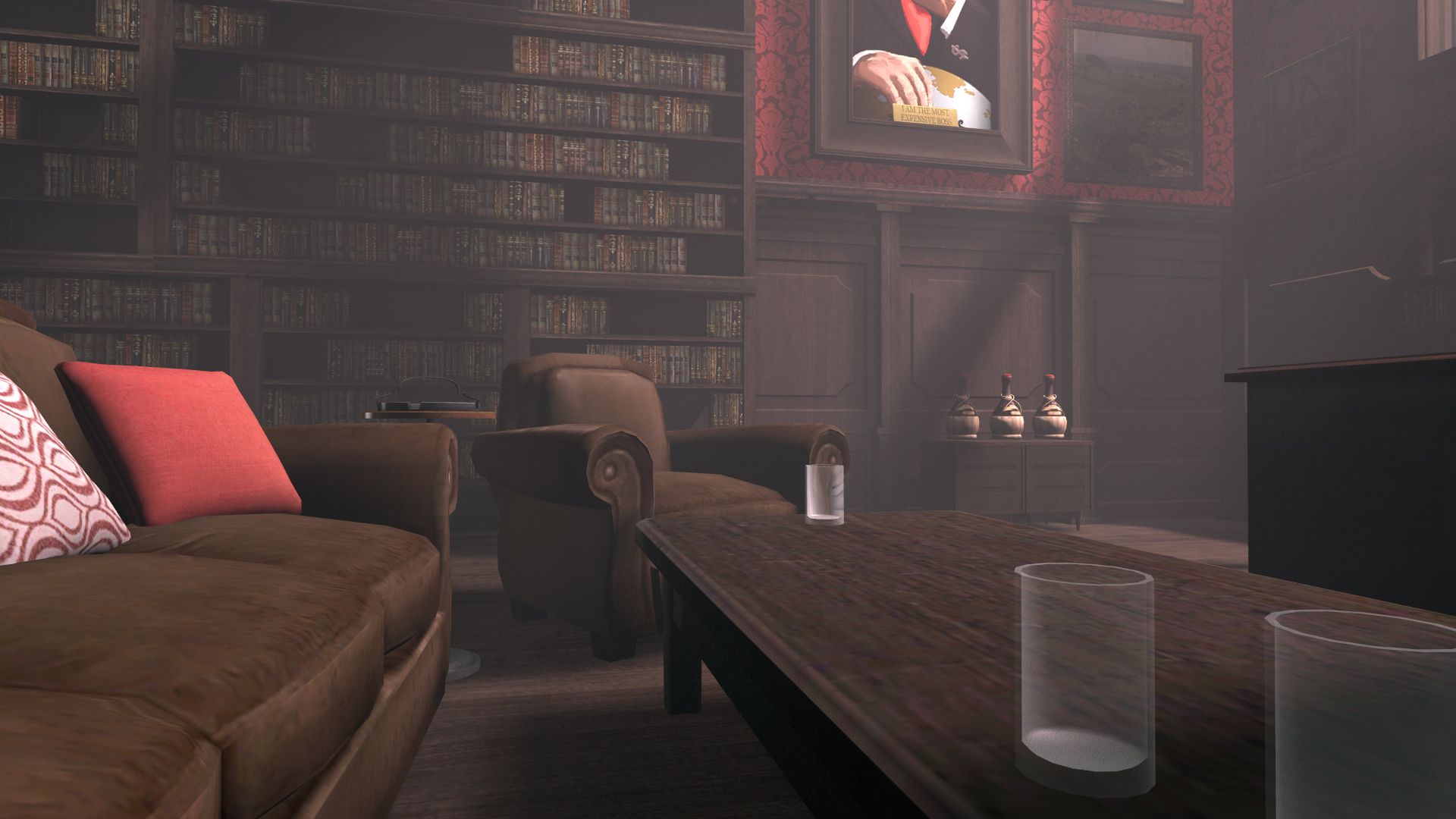 The Stanley Parable is capricious. The Stanley Parable is chaotic. To say that anything can happen is a lie, at least while The Stanley Parable occupies finite space on your hard drive, but it's not an exaggeration to say that you never know what will happen next. The Stanley Parable will systematically dismantle the fourth wall and then, in turn, the other three. You will laugh at it in one room, be driven to the verge of tears in the next, then be nearly overcome by the creeping sense of dread that pervades the underlying fabric of the game. You will feel a sense of solidarity with the faceless, ostensibly self-aware narrator and then, with one small change, feel obliged to spite him by whatever means necessary. As he whimpers quietly into your ear, you will finally pity him. All of this causes the tone to jump around a lot, but never jarringly enough to provoke dissonance. The Stanley Parable will build layers upon layers of intricate meaning, then throw them away, proclaim them to be nonsense, and mock you for trying to analyse them. Treat it like a game, and it will treat you like a fool, holding all that seems familiar to the gaming mindset just out of reach. Why is this switch here? What happens if I press it? Does it mean anything? Does it matter? Does any of this matter? 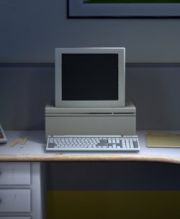 All videos for The Stanley Parable (1)
Advertisement ▼