Following Heavy Rain must have been a daunting task. The interactive drama wasn’t to everyone’s tastes thanks to the quick time event heavy gameplay. But there’s no denying it was a unique game that told a story in a way a film would never be able to.

So here we are with Beyond: Two Souls, another game written and directed by David Cage and developed by the highly respected Quantic Dream. Beyond, enters new territory though, dropping the crime genre for a tale with a sci-fi edge that’s keen to cut into the concept of death and what awaits us on the other side. It has an episodic feel, making it more comparable to a TV series than a film. I mean, how many 12 hour films have you seen recently? 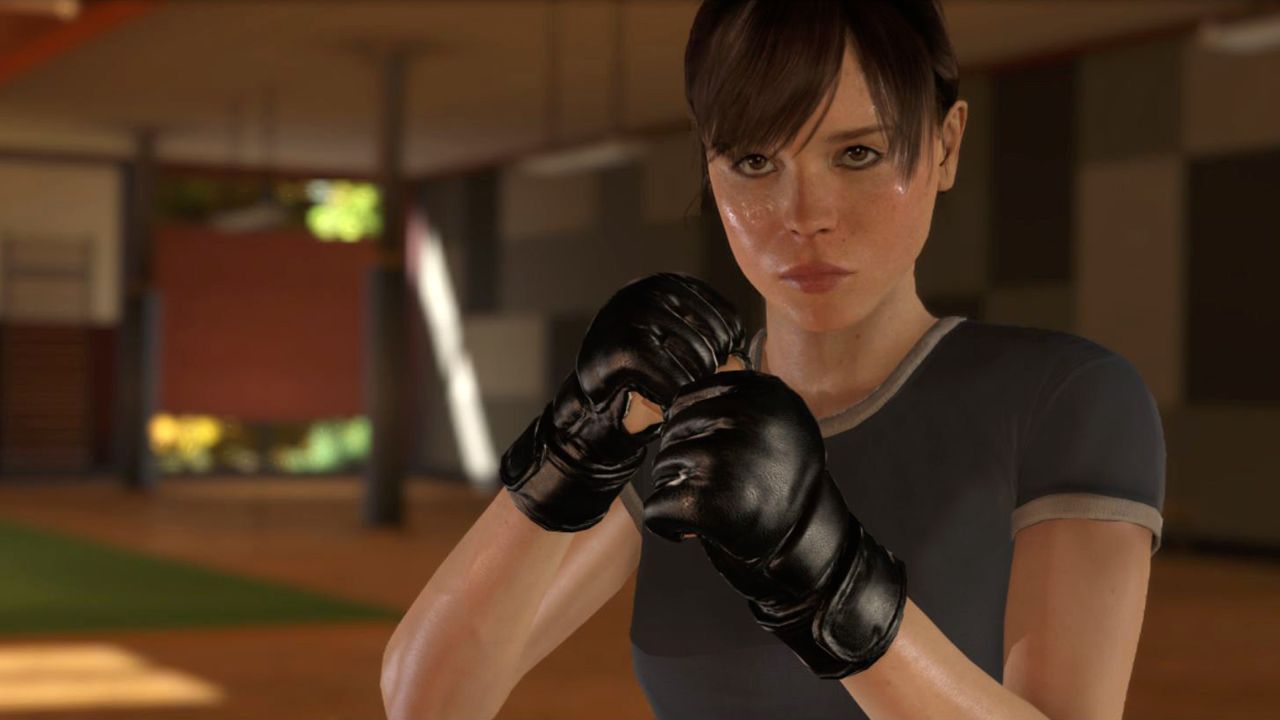 We’ve come to expect actors’ performances to play a key role in Quantic Dream titles, with some excellent work from the cast of Heavy Rain and the excellent facial motion-capture that lifted the game high above the competition. So it makes sense that this time they would reach out to Hollywood and bag some big-name talent.

So here we are, with Ellen Page and Willem Dafoe leading the way. Admittedly, Page initially seemed like an odd choice, as her imdb page isn’t exactly stellar. To be fair, she turned a lot better than I could have hoped, delivering a performance much more mature than any of her films.

With high production values and well-acted roles rapidly becoming the norm with Quantic Dream, the gameplay faces tougher scrutiny now that we’ve stopped gawping at the pretty graphics. Ok, it’s still hard to avoid being beguiled by how good this game looks.

Ellen Page takes the lead role of Jodie Holmes. She’s a unique character, in that she has an invisible spirit entity named Aiden tethered to her existence. Wherever she goes, he is always there and has been since birth. Nobody knows why, but his presence is central to why Jodie is of such a high interest to others, particularly the scientist/father figure -magnificently portrayed by Willem Defoe- who has been studying her since childhood. The game takes place over a period of around 20 years, with scenes frequently darting around different times of her life in episode-like chunks, often making it difficult to follow. 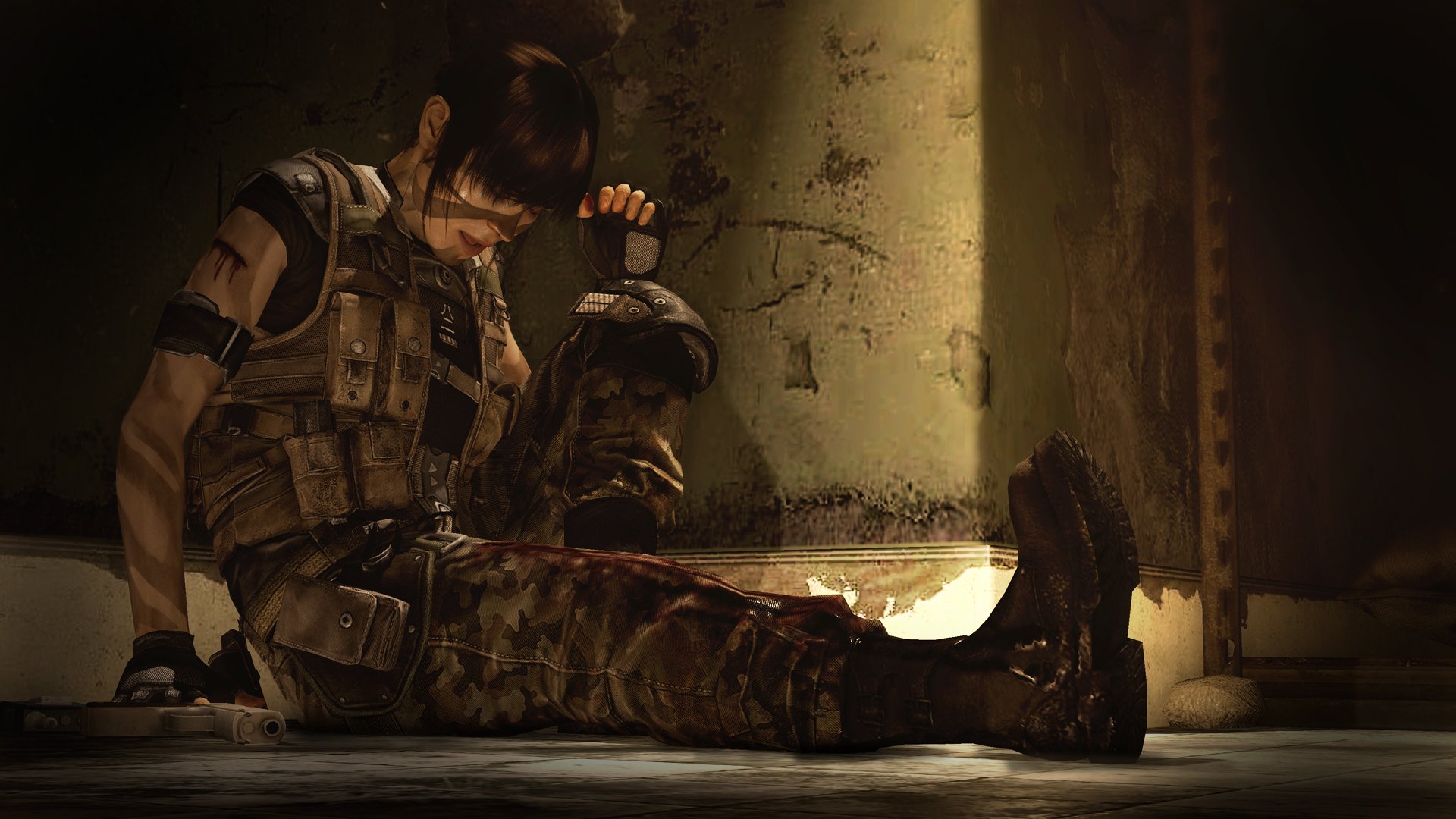 Essentially Jodie has always been with Aiden and we get to see her cope with him at various ages. You’ll experience her life as a frightened child at the research facility and as an angsty teen tired of being locked away from the real world. Later in her life, we see her using her unique talents for the CIA, then on the run from the authorities and then as a homeless person. Cage’s new creation isn’t one for staying still.

Jodie is able to ask Aiden to manipulate objects and people in the real world. Press the Triangle button and you can control Aiden from a first-person perspective, freely floating around and able to pass through most walls. Interacting with the world is what makes Aiden so interesting though. By holding L1 and using the analogue sticks, you can move objects with a sort of telekinetic blast. This is useful throughout; you may knock over a water bottle to make Jodie take notice of the police boarding her train for example. Or use his ethereal form to make him unlock a door from the other side.

Aiden is also able to interact with some people depending on the colour of their aura. Red ones can be choked to death, whereas orange indicates you can possess them. Possession comes in handy when being hunted by armed enemies, as you can turn them on each other or move vehicles out of the way.

Working out how to escape these tricky sections is a lot of fun and they’re put together very well. It’s heavily scripted though and you rarely feel like you could have done much differently. In fact, failure is often the only way you’ll see different scenes. For example, when being chased by the police through the woods, if you mess up climbing a cliff Jodie is captured and will then have to escape from the back of a police truck. Climb successfully and you’ll skip that scene. This makes replaying the game to see different scenes a difficult task as you’ve no idea where any branching may occur. Oh well, there’s always Google. 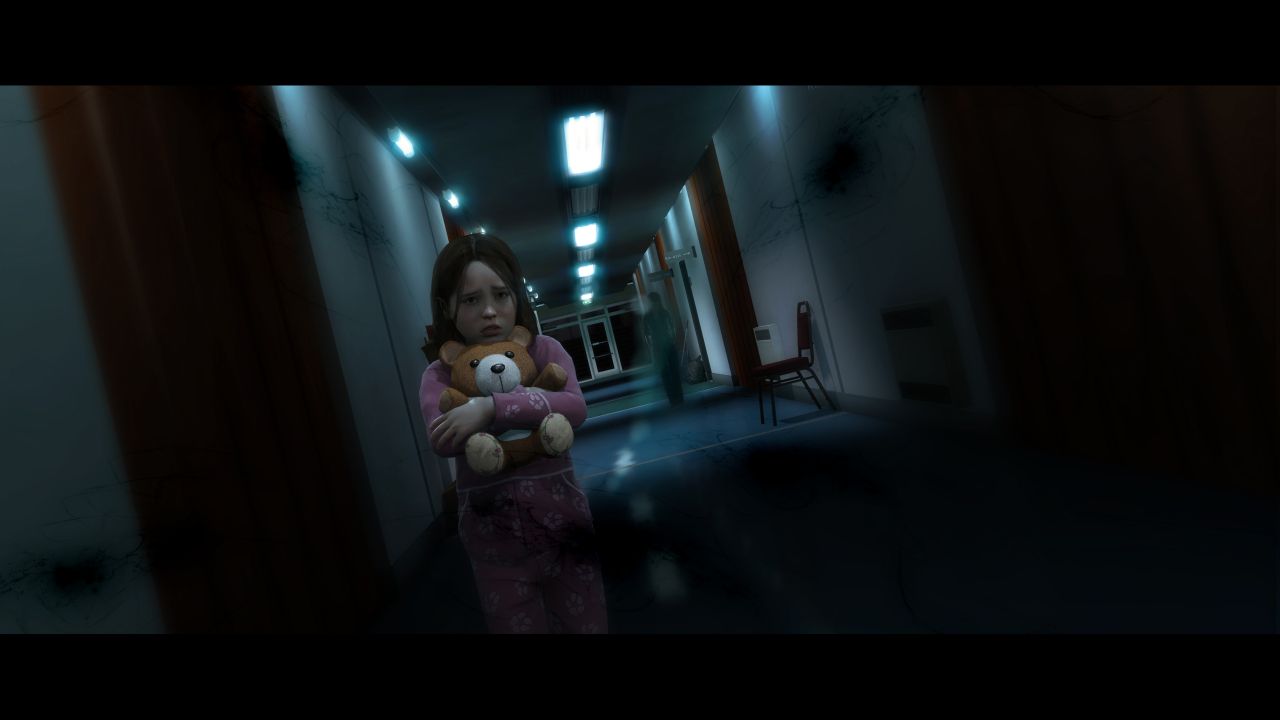 When controlling Jodie you use the standard analogue method, Heavy Rain’s odd ‘R2 to accelerate’ method has been mercifully scrapped. However, by regular standards, movement is very clunky. Jodie walks painfully slow and has the turning circle of a dead cow. Scenes with urgency are only able to muster her into a stuttering walk/run motion. She even manages to make running inside a train look like she’s on a storm-battered ship. Interacting with the game world is a simple affair though, just poke the right stick in the direction of any white blobs you see to get Jodie to open doors or use objects.

Quick-time events are of course back, although they’re not as finger-twistingly complicated as Heavy Rain’s. Even scenes where you find yourself moving from cover and shooting is prompt-driven. It’s very casual-gamer friendly and can even be controlled with a tablet device via a free app, although I couldn’t get it to work at the time of writing.

The new analogue stick responses are less forgiving though. When the action slows down for a second you must push the right stick in the same direction Jodie’s body or attacking limbs are moving in. These actions may roll you out of harm’s way or help you block and attack during a fight. There are no on-screen arrows to help you out, and it’s often unclear which way you’re meant to push, especially when the camera is excitedly moving around like it’s auditioning for a role in a Bourne movie.

If you set the game to casual mode, arrows do appear onscreen to help you out and Aiden’s movement is locked down to hopping between vantage points instead of full control. It’s a little bit too simple for gamers though to be honest. Even so, it’s nice that Quantic Dream have made concessions for non-gamers.

There’s a hell of a lot of dialogue to sit through, but you’re frequently given a range of choices. But I rarely felt like I was at a point where I was about to directly influence the direction of the story, with the exception of a scene where I had the power to decide if Jodie was going to get laid. Sorry Ellen, I’m warming to you, but I don’t want to see you naked. 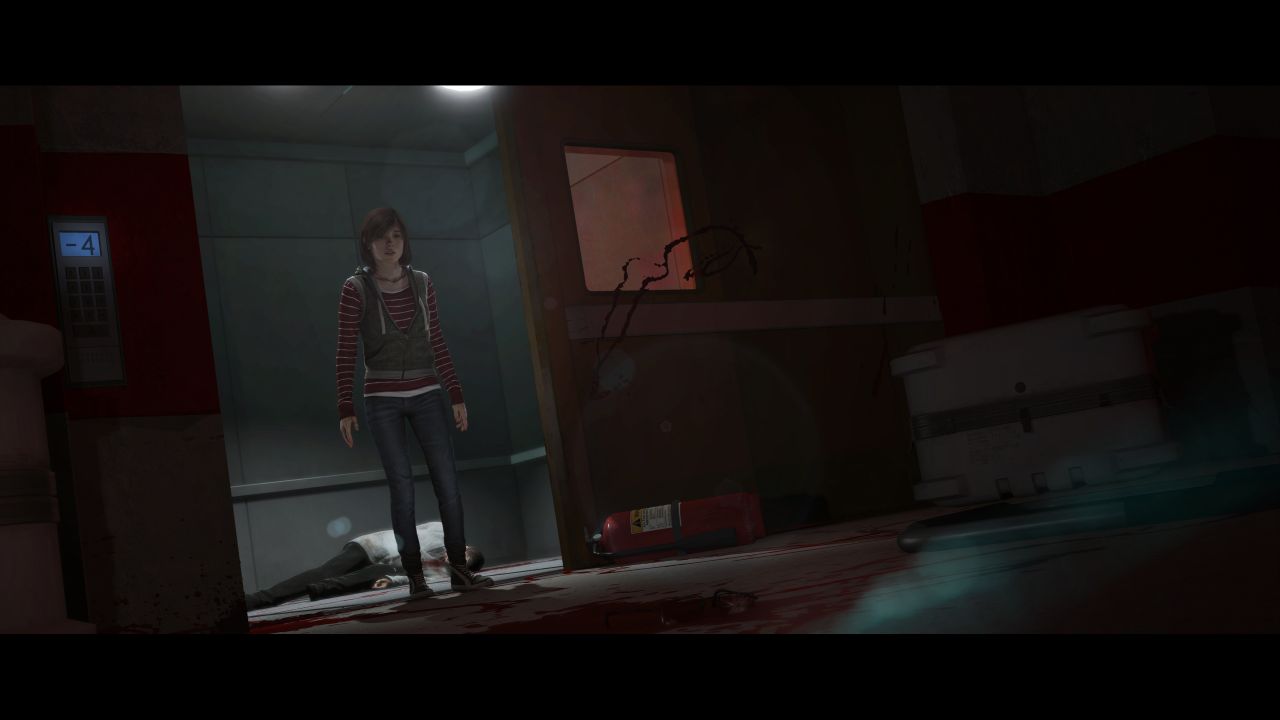 Compare the lack of any real (or apparent) consequences from your actions and conversation with Heavy Rain or Telltale’s The Walking Dead, where main characters (and even player-controlled ones) could die permanently and Beyond seems much more on rails than you’d expect from a team so keen to push interactive drama.

Some of it is just plain boring too. Hours and hours into the game I had to spend ages tidying up Jodie’s apartment, setting the table for dinner and doing chores at a farm. These mundane activities were acceptable in Heavy Rain because they were briefly used as a tutorial and to set the scene before things got going. Here they just seem to act as filler material.

A bigger frustration though is the seemingly random shuffling of the game’s timeline. Ultimately, it brings nothing to the story over a chronological version. Not being sure when you are in the game often makes it difficult to relate events to the scenes you’ve already played. This isn’t helped by needless padding, such as the pointless homeless episode.

That’s not to say that Beyond won’t pull you in. Hell, I finished it in just two sittings. Aside from the padding and the haphazard timeline, the story is remarkably told via some exceptional performances from the three main actors (Kadeem Hardison being the unsung star) . 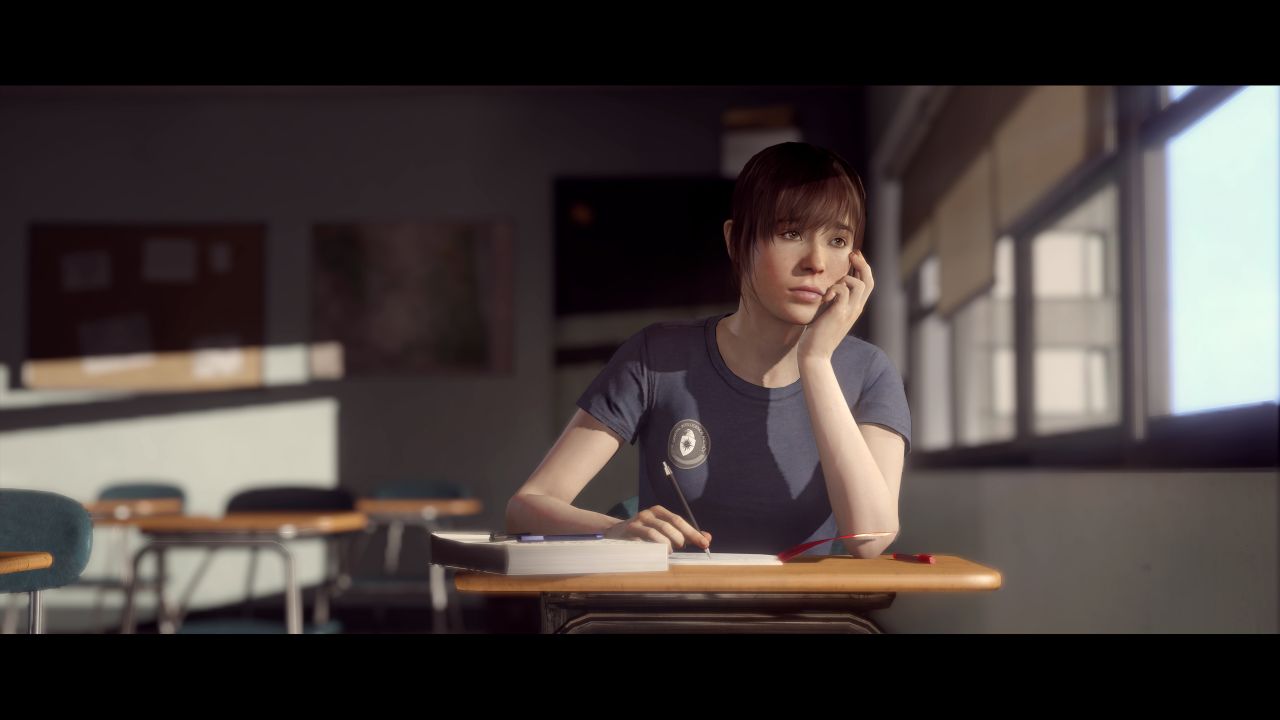 Although I frequently felt like I was being pushed towards the same results whichever way I played, I did enjoy controlling Aiden. We never hear his thoughts, in effect, we, the player, are Aiden. We decide how extreme his behaviour is. Do we kick off when Jodie has a date? Do we go for revenge when Jodie is bullied at a party? These choices often feel empowering despite them rarely having a lasting impact on events. But they do serve a crucial purpose of building a protective connection between the player and Jodie.

Visually, the game is astounding and the locations change so often that your eyes are constantly feasting on the detail-rich environments. One moment you’re riding a horse through the desert like John Marston, the next you’re hurtling through a storm escaping the cops atop a speeding train. Quantic Dream have even managed to make wet tarmac look amazing, I spent ages just gawping at puddles, shadows and lighting outside of a hospital.

My current lasting impressions of Beyond: Two Souls, is that it excels with a well written story (despite the unnecessary timeline editing), it has some of the best acting I’ve seen in games or films and has terrific visuals that keep blurring the lines between gaming and movies. Yet after all this time with the game and the time spent writing this review, I’m still not sure how good of a game it is. Probably because it’s hard to judge it as a game. Life and death was in your hands at every turn with Heavy Rain, here you’re more of a spectator, but a spectator at a show worth seeing.

Our ratings for Beyond: Two Souls on PlayStation 3 out of 100 (Ratings FAQ)
Presentation
95
Exceptional throughout. Quantic Dream have again pulled outstanding visuals from the PS3, making it difficult to see where the next generation can go next. The entire cast (yes including Ellen Page) put in terrific performances too.
Gameplay
60
There's much more watching than we initially feared. But some of the action scenes that let Aiden wreck havoc by pushing objects or possessing people feel well put together. Genuine player choice is very limited though.
Single Player
74
The chopped up story can make it difficult to follow at times, but for the most part, you'll be hooked until the end. You'll want to play it again, but may struggle to spot the signposts for new scenes and choices.
Multiplayer
60
Player two can control Aiden, but there's nothing for them to do inbetween.
Performance
87
A few of the analogue stick QTE requirements are unclear and walking around feels sluggish, but the visuals and character animations (especially the faces) are excellent throughout.
Overall
74
I really enjoyed Beyond: Two Souls, much like I'd enjoy a good story in a TV series filled with actors on the form of their life. And that's the game's problem, it's so passive, I just didn't feel involved enough. Compared to Heavy Rain, it's rarely clear as to how or when you're affecting the plot or events. Nevertheless, it's hard to not recommend trying it for yourself.

All videos for Beyond: Two Souls (6)
Advertisement ▼