Rolling back the clock with the haunted house of mouse

Following the recent retro remake of DuckTales, we now get to see how the classic Mega Drive game, Castle of Illusion scrubs up by today’s standards. As a big fan of the 90s original, I had my fingers cautiously crossed for a nostalgic blast.

The story remains true to the original, with Mickey setting off to rescue long-time sweetheart, Minnie from the evil witch, Mizrabel. Rather than animate some traditional Disney-style cartoon scenes to set up the game, Sega Australia have gone low-budget and opted for some mildly animated illustrations. 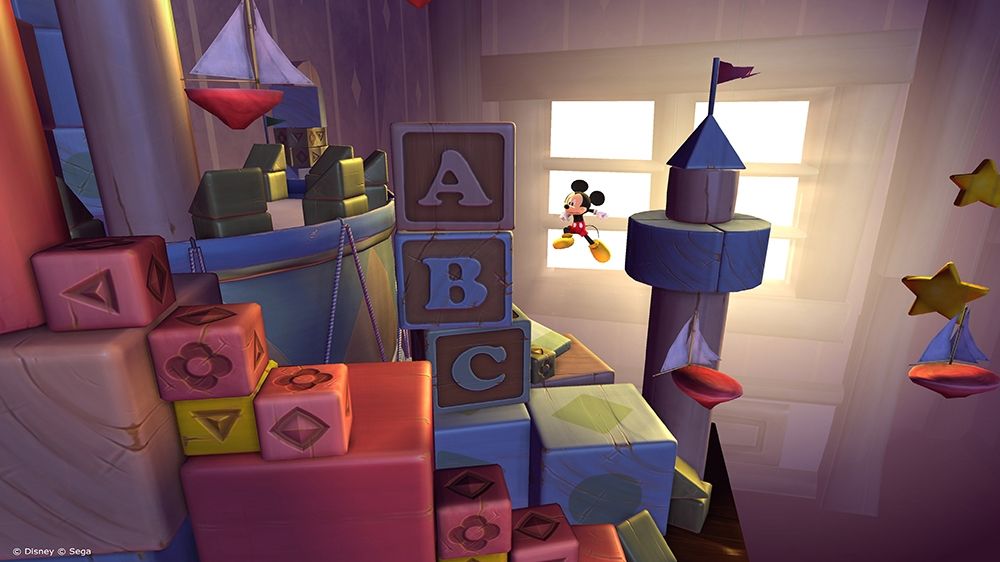 Uncharted fans will be pleased to hear the tones of one Richard ‘Sully’ McGonagle narrating the story though. In fact, your ears are treated rather nicely throughout. The music for each level is an updated take on the original soundtrack, so chances are you may find yourself humming along. The original 16-Bit versions are also available if you’d like to switch over. Nice.

Deep into my nostalgia trip, my rose-tinted glasses almost fell off my face not long into the game when the camera and action shifted from pleasing side-scrolling 2D into modern 3D. What are you doing Sega Australia? Oh, I can’t shout at you, you don’t exist anymore as Sega closed the studio as soon as this game’s development wrapped up. There’s a sign of faith for you.

I’ll get back to the 3D stages later on. For the most part, the game faithfully plays in side-scrolling 2D, managing to tick numerous boxes for fans of the original along the way. So expect to collect those sparkly diamonds, jump on enemies butt-first and throw apples at anything with a cute/naughty face on it. 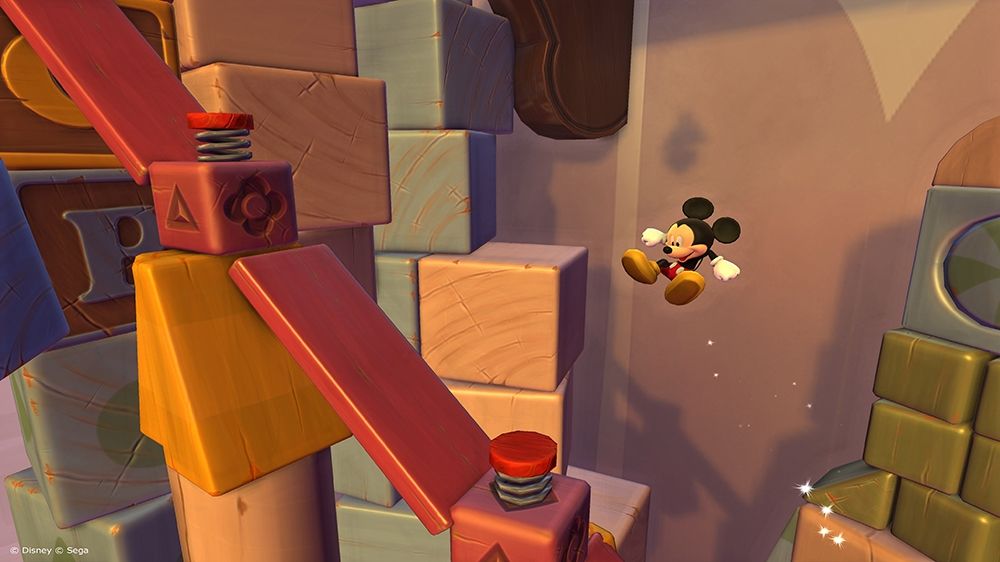 Timing jumps on moving enemies can actually bounce you up into higher areas to find extra treasure. It’s a neat method of combining attacks with exploring and brings something new to the table, for which Sega Australia should be applauded.

It’s a shame then that the jumping itself can be so problematic. There’s some serious input-lag going on here. Mickey’s response time when you press the jump button is atrocious, which really breaks up the rhythm in a series of jumps and makes trickier sections an absolute nightmare.

The collision detection when you’re trying to jump on enemies is also unpredictable. For no reason, you’ll often take damage instead of bouncing off them. Sometimes, I even took damage without them touching me. You’ll die after taking three hits, so it’s not like you can just shrug off such inconsistencies. Sure, you can find health top-ups, but they’re usually dangerously placed, making the risk not worthwhile. Checkpoints are miserably sparse too and losing a life will cause your jaw to drop when you realise how far back you’ve been sent. Yes, the original title had limited lives, so you were facing a daunting Game Over screen, but at least it played fair technically.

The environments themselves are generally pleasing re-imaginings of the classic stages. There are spider-infested woods, haunted castles, a sugary candy land complete with sticky jelly and red liquorice dragons along with all the other levels you may remember. There are some cool lighting effects on display in the underground dungeons too where the path is lit only by the sparks from the knights’ maces hitting the ground. 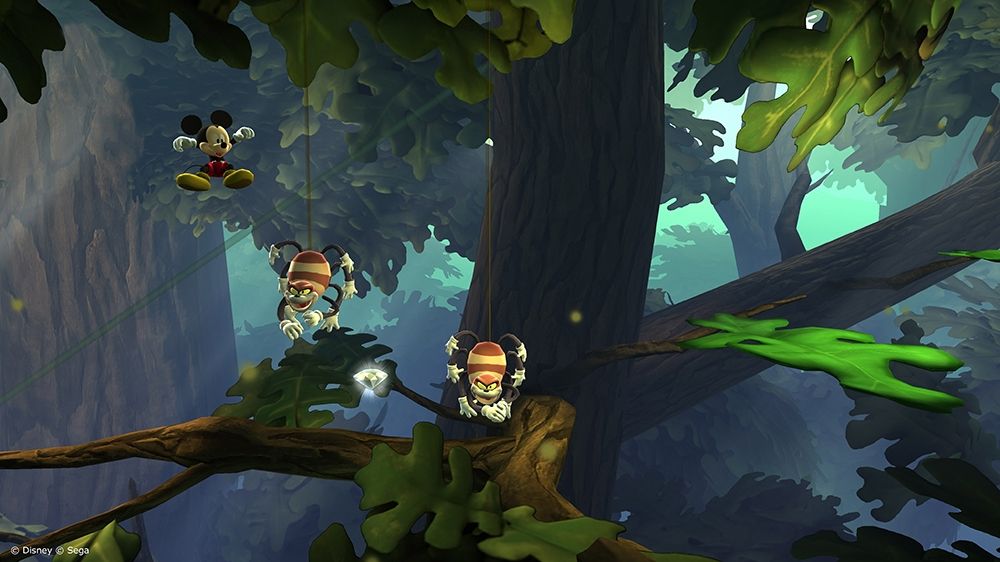 Clearly, a lot of love has gone into updating the stages with rich backgrounds enhancing the detail like the 1990s version of you would never have believed possible. The old stage where you could flip the world upside down and walk on the ceiling hasn’t been shown as much love though. The stage still flips, but Mickey is always on the floor on the bottom of the screen. This was a cool level back in the 90s and I’m really disappointed that that element has been lazily ignored.

More worrying is the decision to try and ‘innovate’ by adding 3D parts to the levels. In mid-air, the jumps are seriously over-sensitive, with the slightest movement of the analogue stick often causing unpredictable landings. It’s a handful in 2D, but when attempting them in 3D it could inspire rapid controller biting.

Most of the new boss fights have been needlessly transformed into 3D too. If Sega were going to reinvent them, they could have at least tried to inject some creativity, instead of the generic children’s game fodder we have here. Aside from a few nigh-on unavoidable spin attacks, the fights simply involve staying out of the way until the boss stagger themselves, letting you move in for a cheap shot. Rinse and repeat. 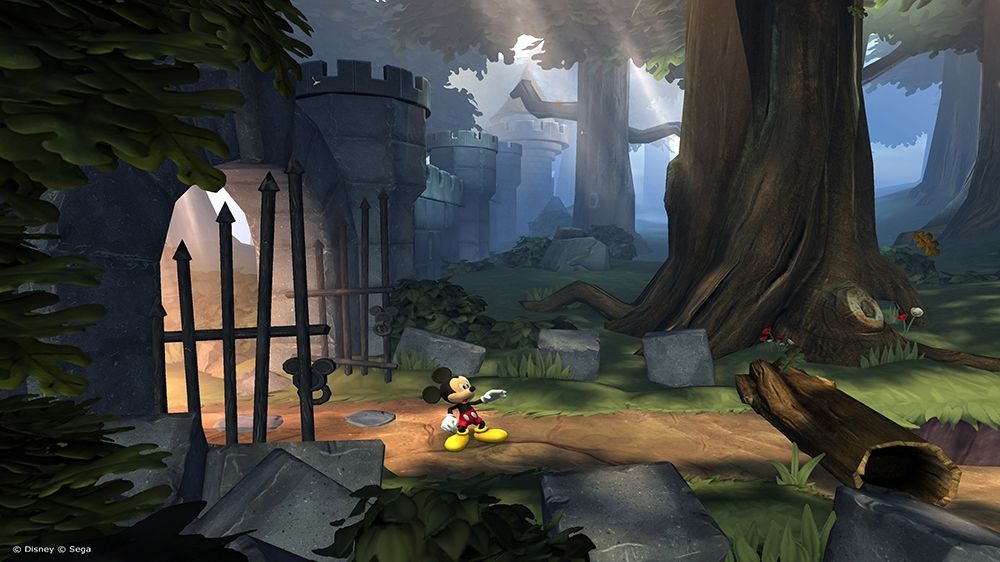 The final boss encounter will smash your sanity to pieces though. Or your controller at least. It’s just so long, the unresponsive jump inputs combined with the collision detection issues and an unskippable intro makes it an exercise in blinding frustration.

If you do manage to finish the game, it’s unlikely the extras will keep you entertained. There are new outfits to unlock and the more magpie-like of you may obsess over collecting the remaining diamonds. But with such lengthy stages, they’re needles in a haystack. Only the most masochistic amongst you will want to re-attempt the stages in time trial form too.

As a remake (although there’s a bit of unnecessary reimagining too), it’s hard to complain about the game lasting well under three hours, but it still feels like you’re not quite getting your money’s worth. American PSN gamers were able to pre-order the game and get a digital copy of the original too. For the rest of us in other PSN regions or on XBLA, were looking at an over-priced package to be honest.

Our ratings for Castle of Illusion HD on Xbox 360 out of 100 (Ratings FAQ)
Presentation
80
Mainly faithful visual updates of the original stages with appropriate levels of Disney-esque charm and character. The music is also a fine tribute to the original soundtrack.
Gameplay
65
The 3D sections are a needless inclusion that nobody asked for. The platforming itself is often overly sensitive too, causing much frustration. When it behaves though, there’s no denying there’s fun to be had, especially high-bouncing off enemies to reach hidden areas.
Single Player
60
Fans of the original have the most to gain from playing this remake, but also the most to lose. The brevity and technical issues would have been much more forgivable if the final boss wasn’t such a difficulty-spike nightmare that left the game with such a bitter aftertaste.
Multiplayer
NR
None
Performance
55
Slow response times let the platforming side of the game down, as do a few collision detection issues.
Overall
64
Castle of Illusion would have been a more attractive purchase if the original game had been included for all. Instead, we’re left with an over-priced trip down memory lane. The unresponsive platforming and 3D sections somewhat spoil things, but there’s no denying this remake has buckets of charm for fans of the original. 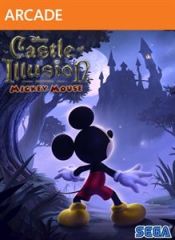