Welcome to the battlefield, soldier. Now get out there and memorize that wiki.

You know, I'm starting to feel like modern military shooters might be finally doing some good in the world. I'm prepared to forgive their butchery of the first-person shooter, see, because it seems they've finally grown up enough to try and convince people that war is shit. Spec Ops gets the honorary mention for its story arc and that particular scene, of course, but even the latest Call of Duty had a modicum of self-awareness nestled amongst all the rampant nationalism. That was all just storytelling, though, and stories are unreliable things that are open to interpretation. Gameplay is much more conducive and solid in that respect: a horror game with an unnerving story is good, but a horror game that forces you to do something unnerving is much more deserving of being pigeonholed thus. Arma 3 earns a gold star, then, for having actual gameplay that showcases why sending people off to join the army is a bad idea – specifically because they'll be overwhelmed by tedium for hours on end. And shot by somebody they never saw. 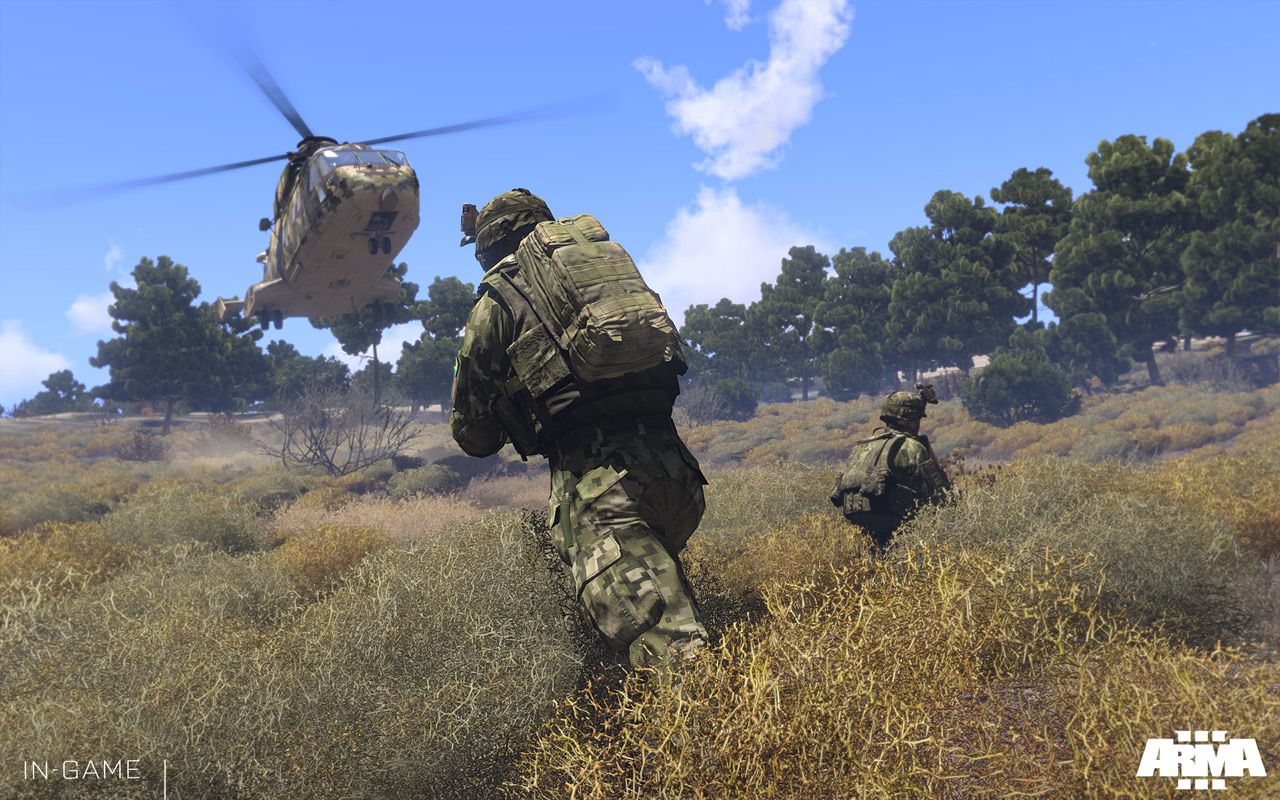 For the uninitiated, Arma 3 is the tactical first-person shooter equivalent of games like Euro Truck Simulator or Train Simulator: a quiet endeavour towards realism and authenticity over the troublesome business of gameplay design. Unlike such titles, however, you aren't bringing in the harvest or delivering paraffin to Lancaster in the driving rain, but instead wallowing in the more familiar gaming territory of exacting military-approved murder upon your fellow man via miscellaneous ordinance. So in much the same way that Euro Truck Simulator never had missions in which you ram a competitor's truck off the road or race a light aircraft across Europe, Arma 3 doesn't include ridiculous quick-time-event fight sequences with eyepatch-wearing Russian masterminds. It's easy to just dismiss this as one for the hobbyists and call it a day, but I feel it's probably better to investigate what the average consumer might gain from the game.

This is normally the part where I'd lead in with a description and some light teasing about the single player campaign, but sadly the single player appears to have gotten a bit tipsy and fallen into a ditch because it isn't actually there at all. A bit of professional journalistic research (read: thirty seconds of half-hearted Google searching) reveals that the campaign will actually be released over the next few months as free DLC episodes, and really, am I the only person a little bit annoyed about this? Yes, it doesn't cost you anything, and yes, it's better than rushing the damn thing to meet deadlines, but is it okay to just leave out such an integral part of the game with the promise it'll turn up in the future? I mean honestly, Bohemia Interactive, you're not Valve: people aren't going to custard pie you in the streets for pushing the release date back. Hacking off major parts of the game that haven't fully grown yet and presenting it as a finished product seems like the consequence of insufficient resources. It'd be like realizing you don't have enough metal to finish the roof on a car and simply selling it as a convertible with the promise of following up with the roof at some point in the future: it’s better than no roof at all, but that'll be little comfort when you’re being soaked to the bone by torrential rain. 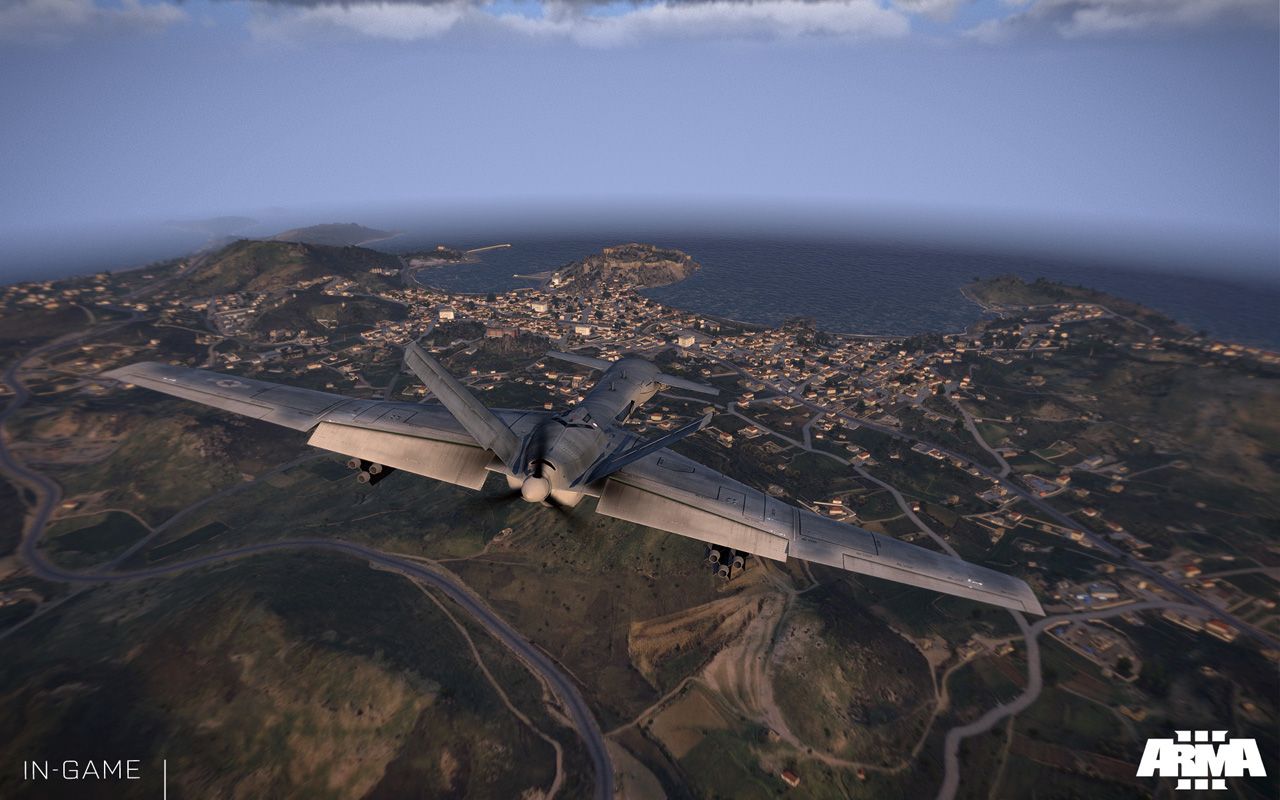 So right now Arma 3 is essentially almost a multiplayer-exclusive title, but that's really not as problematic as it sounds. Usually releasing a standalone multiplayer game that hasn't been trumpeted from the rooftops would be comparable to angling in the wake of a convoy of fishing trawlers, but Arma 3 sails merrily through clutching the twin shining keys to multiplayer gaming: a widespread community and strong mod support. I was surprised to find servers within a playable range and even more astounded to discover a decent number of players on them. That might've just been a dream, though, because the people I was playing with seemed to be polite, patient and completely forgiving in the event of disasters on my part,, which ranks them somewhere above unicorns in the Tourist's Pocket Guide To Mythical Creatures From The Astral Realm.

Gameplay is essentially everything the Arma series has led us to expect so far – that is to say, hyper-realistic first-person military combat in an environment roughly five times the size of the entire known universe. This time it's the fictional Mediterranean islands of Altis and Stratis, two dusty volcanic rocks laced with picturesque towns and boxy utilitarian military bases (both of which are severely lacking in interior furniture). Missions are nicely varied, making use of the terrain wherever possible, alternating between the various flavours of warfare – sneaky guerrilla squad tactics, widespread assaults, vehicular combat, extended skirmishes, underwater gunfights, that sort of thing – and manage to be quite organic in their execution, letting you approach objectives with relative freedom of movement. I'm not just throwing 'freedom of movement' around idly, either: theoretically there's nothing to stop you turning on your heels and sprinting over the hills like a panicked deserter, though your team-mates will probably get a bit narky if you use the only functional tank as your getaway vehicle. 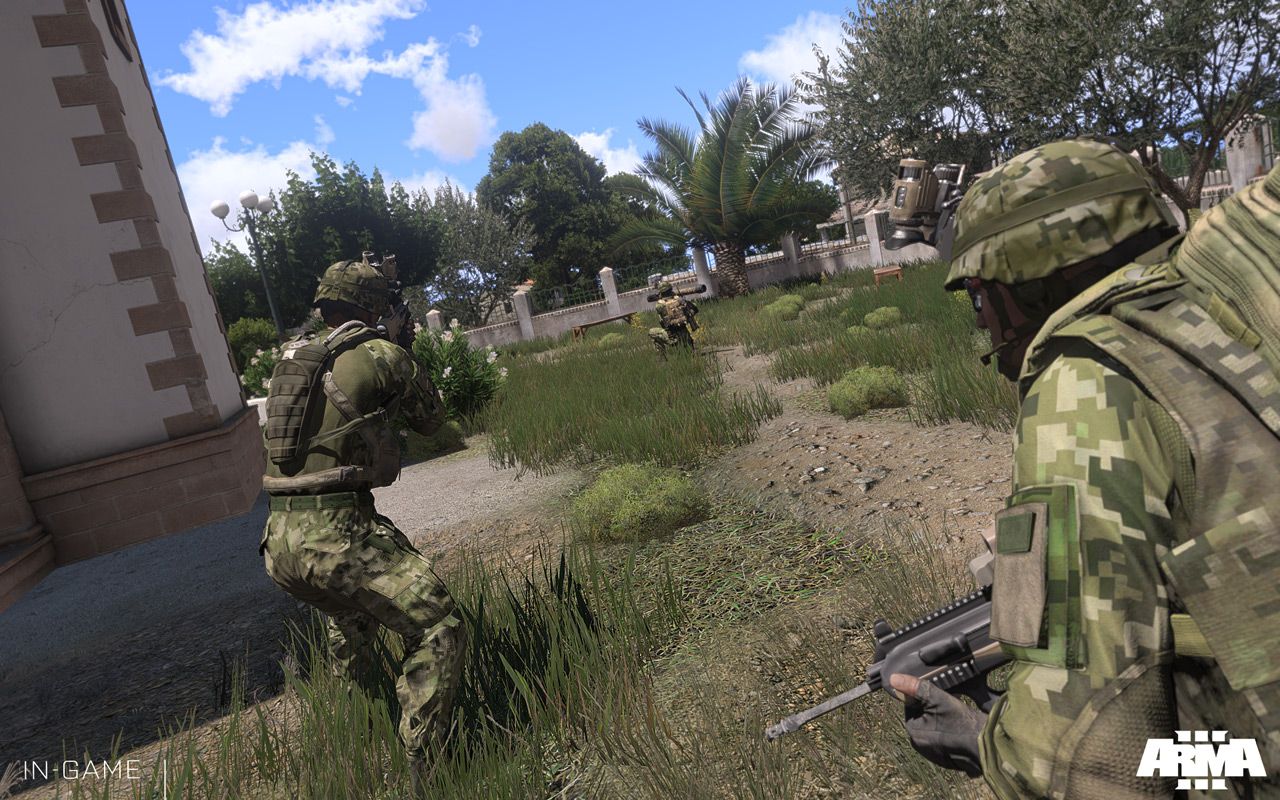 Eventually I grew sufficiently unnerved by the patience of my allies and took refuge in the single player showcase, a set of various missions designed partially, I suspect, as a conciliatory measure for not showing up with a real single player campaign, but officially as a method of showing off Arma 3's multiple flavours of gameplay. User-generated content missions are available too, already waist-deep as of time of writing, but with no offense to the dedicated community members involved in them, this review just covers the parts of the game that Bohemia Interactive was actually responsible for. This sort of business tends to be a bit more heavily scripted than the multiplayer missions, leading you along a sequence of more strictly defined objectives like a marionette on a string, though in the big scheme of things that's still several light years away from the 'cinematic' first person shooters of today.

Being on your own also means that you have to rely on the AI and can't just tag along the player with the serious-looking clan tags, though thankfully your computer-controlled squad allies do seem to balance helpfulness with the ability to let the player feel in control for the most part, at least when you get slotted into the position of the commander and not just a faceless drone. They'll follow you blindly around at a respectful distance like a horde of shy fanboys, but once the bullets start flying they'll spread out, take cover and spot foes from several miles away with their apparently cyber-augmented eagle eyes before firing. It felt like I was leading a group of competent self-sufficient allies who still recognized that they weren't supposed to be driving events, which was a breath of refreshing air after the inhaling the foul stench that The Bureau's AI exuded from every pore.

It's a good thing the AI can look after itself, too, because manipulating them from the ground is apparently something the game decided was to be left as an exercise for the player, along with almost everything else. There's a definite deficit in tutorials or guidance, which in a game as deep as this is like flinging the player off the White Cliffs of Dover with a brick tied to each foot and asking them to swim butterfly stroke. Despite the spacebar functioning as an all-purpose context-sensitive 'use' button, your controls cover more pages than the EULA and manage to be almost as impenetrable. Occasionally a quick dialogue box will flash up during a specific section in the aforementioned showcase, but they're rarely comprehensive or explanatory enough to give the full story. I ended up breaking the flow every now and then in order to check my key-binds and make sure that pressing a certain button would cause my helicopter to do a triple somersault and not pile-drive itself into the ground.