Welcome to the battlefield, soldier. Now get out there and memorize that wiki.

Don't worry too much about that, though. Chances are that if you do forget how to do something, you'll have time to stop, open the options menu, find the manual, get up, make a cup of tea, come back, write some hyperbole on the internet for a bit and still be able to work it out before anybody finds and shoots you. To say that Arma 3 tends to progress at a sedate pace is to fail to express the sheer volume of plodding monotony that infuses its gameplay. You could spend an eternity just trekking across the landscape if you're unfortunate enough to be denied vehicle support, and once you get to your objective you'll find that the best course of action is to stop about a mile away and painstakingly slither towards it on your belly using only the contractions of your manly pectorals, stopping every now and then to listen and make sure you aren't about to come face to toes with a burly enemy trooper. 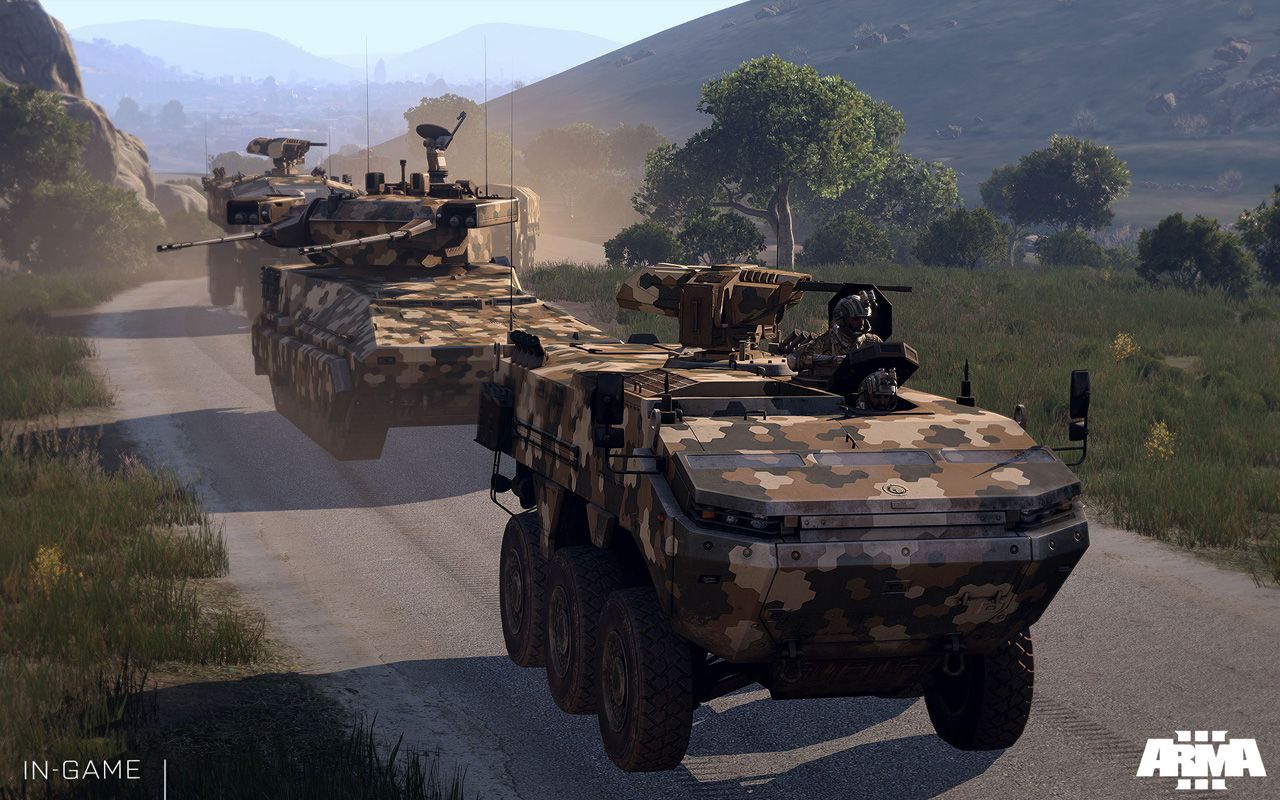 Long-range combat is a soulless sniping festival while close-quarters combat tends to completely flip the pacing switch, becoming hectic, confused, and usually a matter of who spotted who first.I'm sure it's all very realistic and tactical and other words doubtless plastered all over the marketing material, but unless you have a very specific frame of mind it's nowhere near what you'd call entertaining. Your fragile human body takes damage about as well as a biscuit takes hot tea, so gameplay tends to be intensely unforgiving to even the slightest slip-up. There's satisfaction to be gained here in perfectly executing manoeuvres in the face of such overwhelming odds, of course, but it's usually not enough to justify the number of abject failures you'll experience. Where is the entertainment value, I ask you, in stepping out of cover for a second and being punished by a swarm of angry bullets because you didn't locate the one particular smudge on the horizon that was an enemy soldier?

Oh, but being a squishy mortal is only half the story. Arma 3 just loves to play with its military technology, and at the center of its mass of riveted steel and camouflage paint is its vehicular warfare. You have the usual business – APCs, quad bikes, tanks, helicopters, speedboats – but also more exotic solutions like drones, UAVs and even a mini-submarine. Driving these around actually goes part of the way to solving Arma 3's most glaring issues to an outsider like myself, since you can now move at a respectable pace and you actually have something protecting your vital organs other than a comfortable woolly vest. In one scenario I barreled down a hill at full speed in an armoured van, rammed through the front gates of a military base, switched to the grenade turret and promptly covered everything that moved in a soothing blanket of fireballs. Gratifying? Absolutely, and it was all the sweeter knowing that a designer somewhere was jumping up and down in fury because I'd actually taken advantage of the game's open-endedness instead of just following whatever the correct military protocol for this sort of thing is. 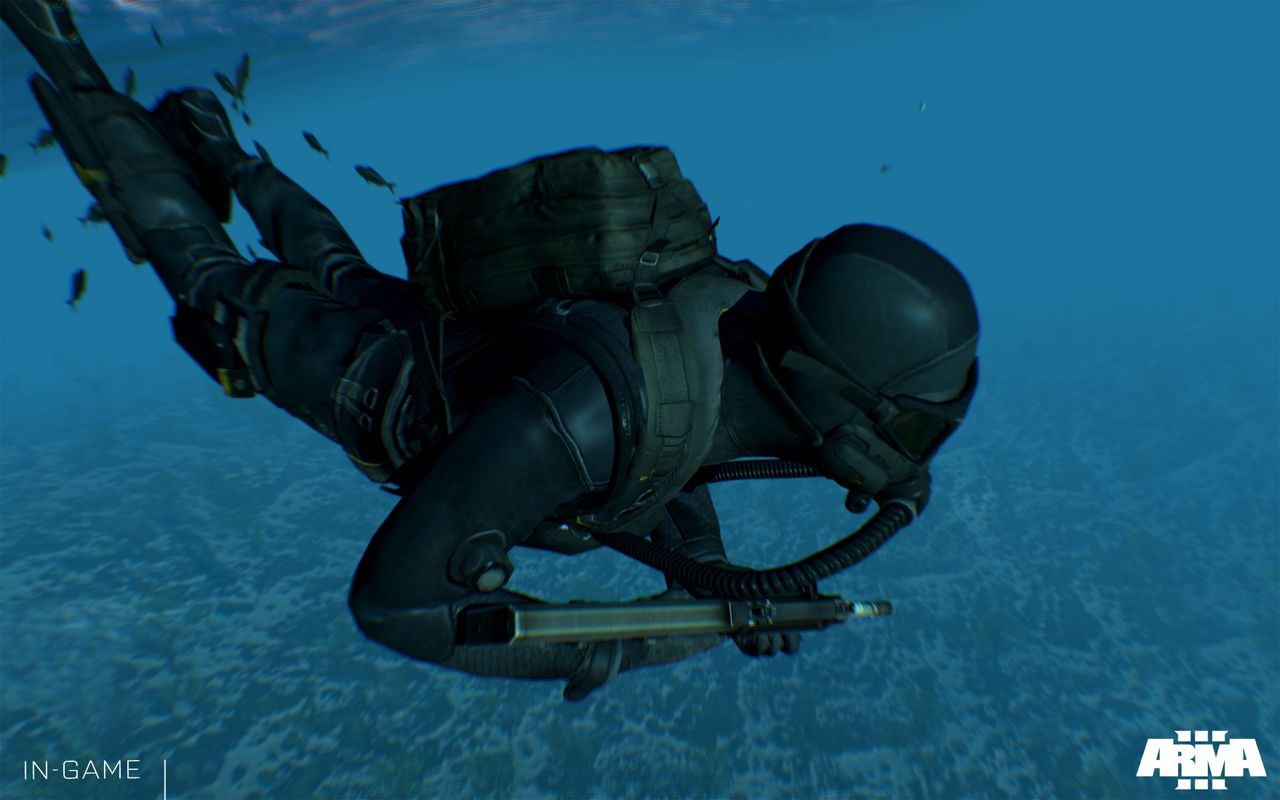 Eventually all of this has to slither out of your computer and into your face in order to make you perceive it as part of this miserable mortal coil, so how well does Arma 3 accomplish this task? Well, it's the same mantra as the rest of the game: realism, realism, realism, and of all the things that have to chant that at the top of their lungs, the visuals suffer the most for it. It's a microcosm for the problem of this brand of aesthetics, where the lighting is crisp and the polygons are a-plentiful but all they're being used to render is an expensive gun barrel over a dry, unremarkable landscape. I get a face-full of reality every time I look out the window, so I hope you'll forgive me if seeing Arma 3 faithfully recreate a boxy utilitarian military base doesn't exactly set my optic nerves ablaze. Still, setting it in a cel-shaded depiction of Narnia would be a bit of a departure from tone, so let's just say no more about it.

Looking at the smaller details reveals something of a mixed bag. Weapons look and sound responsive, sunlight bleaches the ground until it feels like your monitor's going to give you a suntan, and artillery shots land with unannounced grace loudly enough to make you leap out of your chair and take refuge under the desk, but the longer you look the more the engine’s relative age shows. Real Virtuality 4, as it is bafflingly known, is but the latest iteration in a line that stretches all the way back to the original Arma and its precursors, and it’s starting to look a bit weary under all the makeup. Spend too much time lying in the brush and you’ll notice the way the ground textures stretch and distort underfoot, or the way destroyed structures simply sink into the ground like they’re answering the call of the Mole People. On the occasion that things start to heat up and more than a handful of entities start getting rendered on-screen, you can practically hear the old foundations creak as the framerate drops alarmingly. 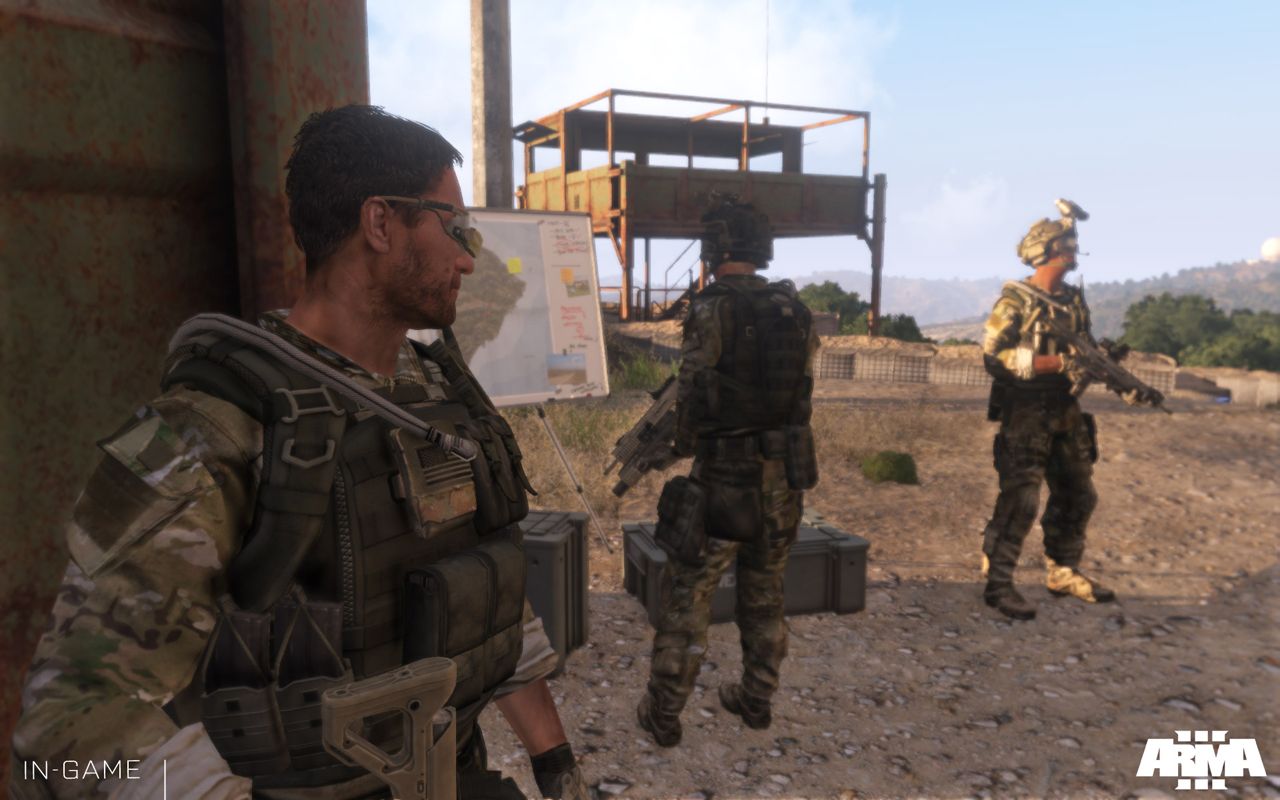 Arma 3 comes across as an impressive game, but that's not the unequivocal praise it sounds like: it's well-polished, changes things up often enough and is frankly frighteningly deep, but the effort is slightly misplaced, the videogame equivalent of restoring a beautiful vintage car just so you can drive it into a swimming pool. It offers so much – from underwater gunplay to helicopter dogfights, from tactical coordinated assaults to sneaky assassinations – but if you say “Great! That sounds fun!” the game just looks at you with a perplexed expression and checks its pocket dictionary. It has an excellent grasp on how to be a simulation, but not such a strong grip on what it means to be a game. At any rate, it doesn't really make attempts to meet a mainstream audience halfway, and when I look back at what's happened in the past to games that tried to meet mainstream audiences halfway, that's honestly something to be respected. I mean, if you're into hardcore military simulations then Christmas has arrived early for you on the back of a camouflaged gunmetal-grey Land Rover, but to the average player it's a game to warily observe before diving in. When all's said and done I had bouts of genuine fun in Arma 3 and it fills the niche it's carved out for itself wonderfully, so if it sounds like the kind of thing you might enjoy then you probably will enjoy it. I could elaborate further for those that are still on the fence, but I've had the game running in the background for the last hour and I think somebody might be finally shooting at me.

Prev12
Our ratings for ArmA 3 on PC out of 100 (Ratings FAQ)
Presentation
61
Stark realism isn't much to look at, but that's kind of the game's thing so you can't begrudge it for it. There's a few pretty lighting effects here and there if that's really important.
Gameplay
72
Core combat can be unforgiving and awkwardly-paced, but keeps itself afloat with the spice of variety.
Single Player
53
User generated scenarios are all very well, but not everybody's going to be happy with that in the time between now and the actual campaign's release. Some proper tutorials would be nice, too, as opposed to just letting us flounder around.
Multiplayer
88
Feature-rich with a strong community and mod support. This is the kind of multiplayer that developers ought to aspire to.
Performance
(Show PC Specs)
CPU: Intel i7-870 @ 2.93 GHz
GPU: Nvidia GeForce GTX 760
RAM: 8GB DDR3
OS: Windows 7 Premium 64-bit

79
From what I could tell it's solid as a rock, though certain complex scenes tend to chew up the framerate alarmingly fast.
Overall
72
As a simulation it's excellent; as a game, not quite as good. Not exactly inaccessible, but certainly not an ambassador.