The early ‘90s were all but littered with plumbers and furry animals leaping from one platform to the next. The object of each title was not to reach the story’s climactic conclusion; it was to grab as many coins or rings as possible before reaching the end of the level. It was during this time that some video games attempted to break the mold, and one of the most successful titles at doing so was released in 1992. 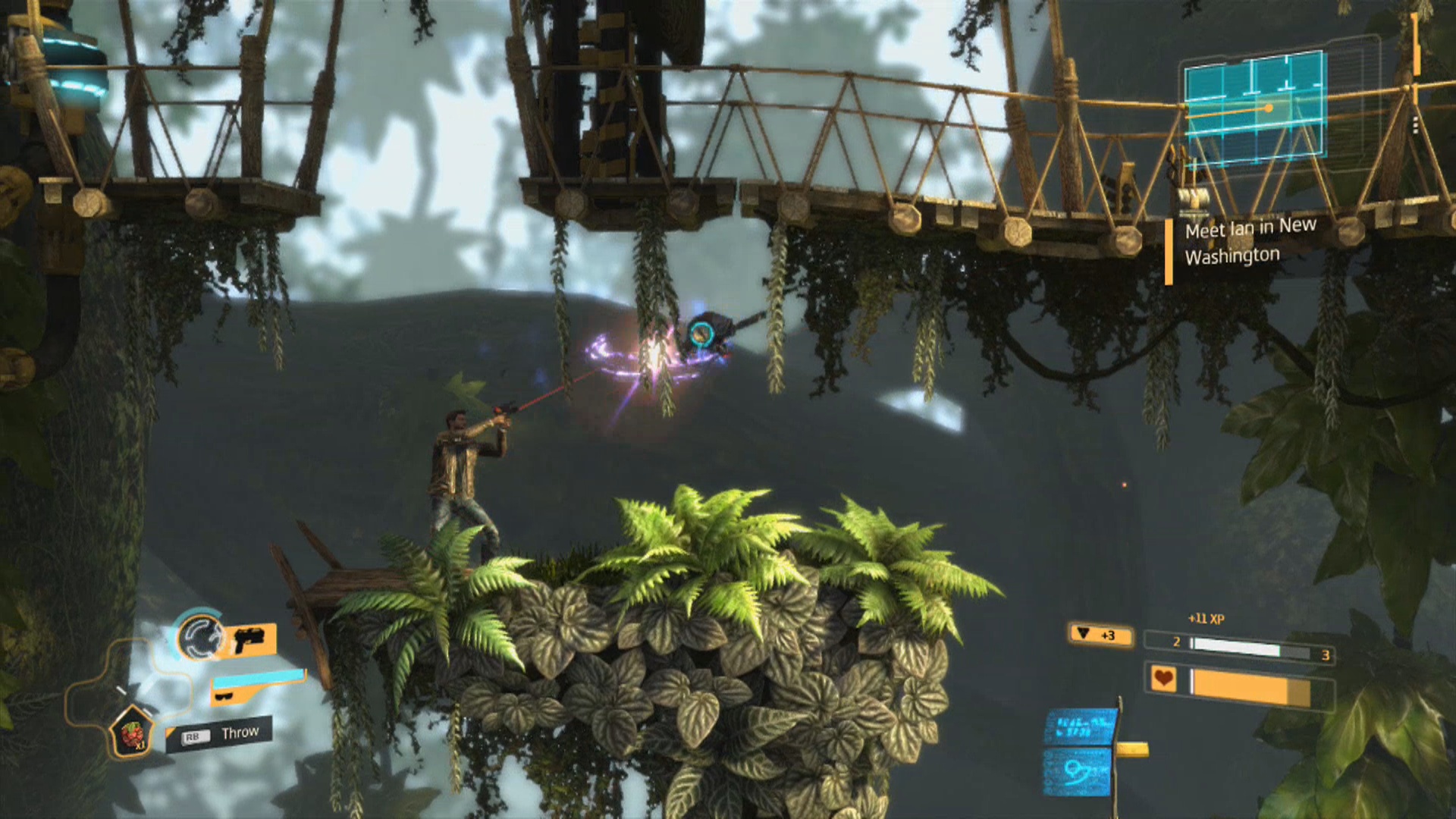 Flashback: The Quest for Identity, developed by Delphine Studios, was a monumental achievement. Besides the rotoscoping—a feature that gave the character realistic and weighty movements—the science fiction platformer offered something rarely seen in the video games of yore: a cinematic experience. Flashback not only delivered impressive cutscenes, it provided a storyline consisting of amnesia and alien invasions inspired by the likes of They Live and Total Recall. While it was quite the sci-fi epic during its release, intricate storylines and cutscenes are the norm for today’s generation. This begs the question: Does Flashbackhave what it takes to stand out in today’s market?

Original game designer, Paul Cuisset, along with his studio, VectorCell, thinks so. Hoping to stay true and recreate the game’s “original spirit”, while also incorporating modern gaming mechanics, the company has released the 2013 remake as part of this year’s Summer of Arcade on Xbox Live. Though Flashback (2013) does offer an improved look, any nostalgia regarding the classic will be tainted by this ill-humored, glitch-filled, side-scrolling remake.

Noticeable immediately is the almost complete disappearance of rotoscoping due to the addition of analog controls. This means Conrad B. Hart, the game’s intrepid protagonist, will run at default and move without any consequence of weight or momentum. He will still have to climb up, drop down, and jump from ledges, but the remake is much more forgiving when it comes to precision platforming. Players are also granted a mini-map that always guides them to the correct destination. With analog control and a mini-map, Conrad can move reliably throughout the environments removing much of the exploration and platforming difficulty Quest for Identity was known for. Because of this, VectorCell geared the remake’s focus more towards combat. 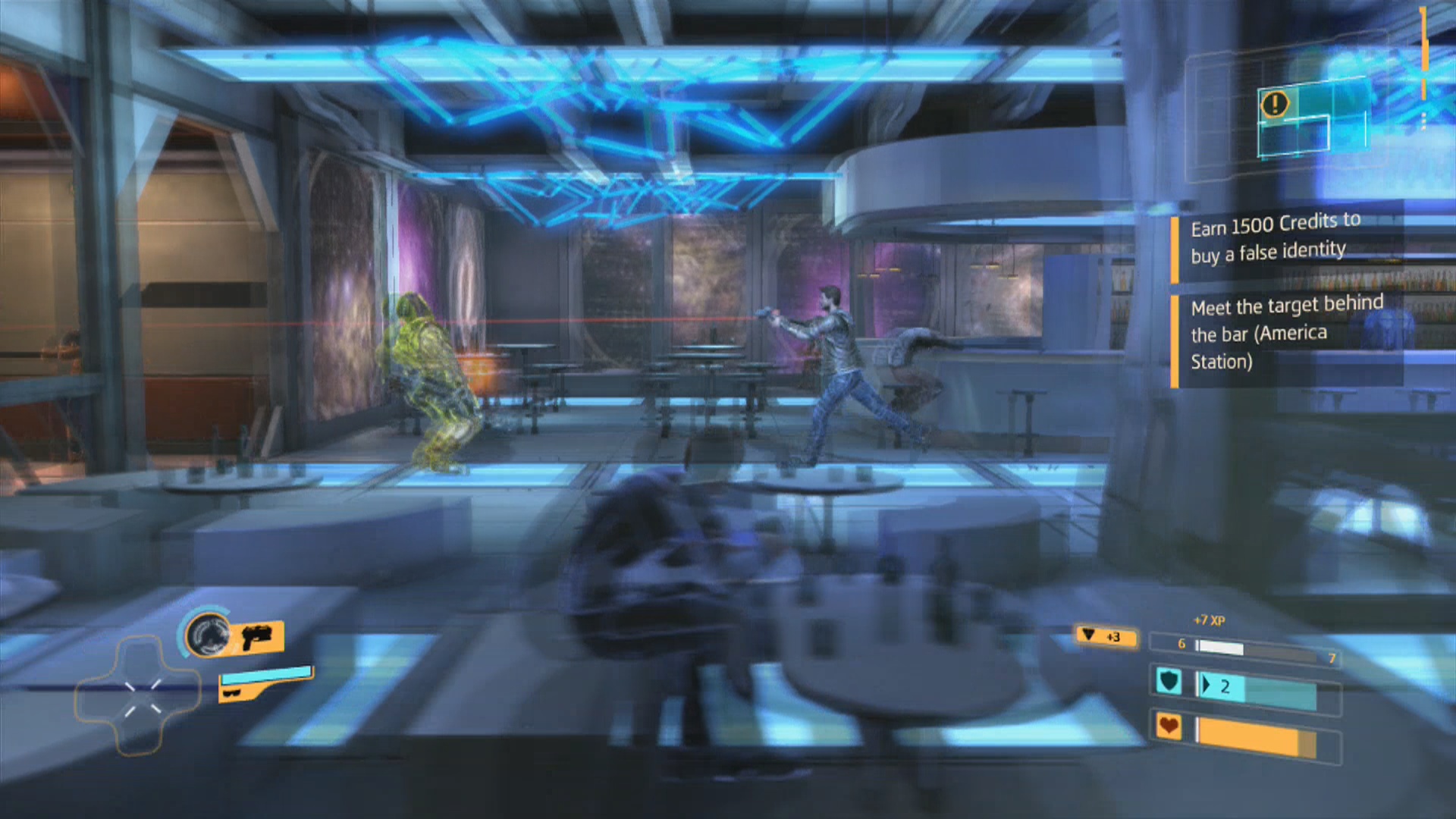 Since the same five types of enemies will come at Conrad from all directions, he can fire his pistol in a 360 degree range of motion supplemented by a laser sight. To take aim, players need only to move the second joystick which will both draw his pistol and aim it at the same time simplifying the original’s process; not that it needed to be simplified. The opposition will gladly introduce their pixelated bodies to any of Conrad’s bullets or grenade blasts since the AI isn’t the least bit interested in self-preservation. In turn, some of the more “challenging” combat situations become a game of cat and mouse as Conrad runs back and forth charging his Mega Man-inspired charge shot to deal a better amount of damage. Unfortunately, even if the combat was more challenging, it would not be any more exciting. The monotony of shooting and rolling will tire players out quickly; especially after facing off against flying drones for most of the game. Their destruction will earn Conrad experience points for his weapon and health attributes, but the change in stats is too minor to make any impact.

If you do happen to fall in battle, or off a ledge, you will be taken to the most recent checkpoint. This will happen somewhat frequently, but not due to player skill. Barring the one-hit kills, the game would encounter frame rate issues or some sort of glitch resulting in Conrad’s death far too often. The most common glitch was controls locking up after a dodge roll which left our fearless protagonist standing tall as he proudly accepted an alien blast to the dome. However, some bugs did work in humanity’s favor, such as a boss freezing in place after getting hit with a grenade while climbing a ledge; it was the easiest boss fight I have ever encountered. Thankfully, the intolerable hiccups in gameplay are short lived as the adventure is not a lengthy one. Clocking in at around four to six hours, this is one alien invasion that should not take players too long to thwart.

The story, for the most part, remains the same. Those who took the 1992 adventure will be able to relive certain moments, but VectorCell has integrated a few new, yet unnecessary, plot devices and twists to alter the narrative. Players will follow Conrad on his journey to regain his memory, discover why it was erased and repel a deceitful alien invasion. Nevertheless, while those subjects were innovative back then, in the present they stand as nothing more than clichés. The generic lone agent against an alien race has been done before, and Flashback does nothing unique to amaze newcomers. 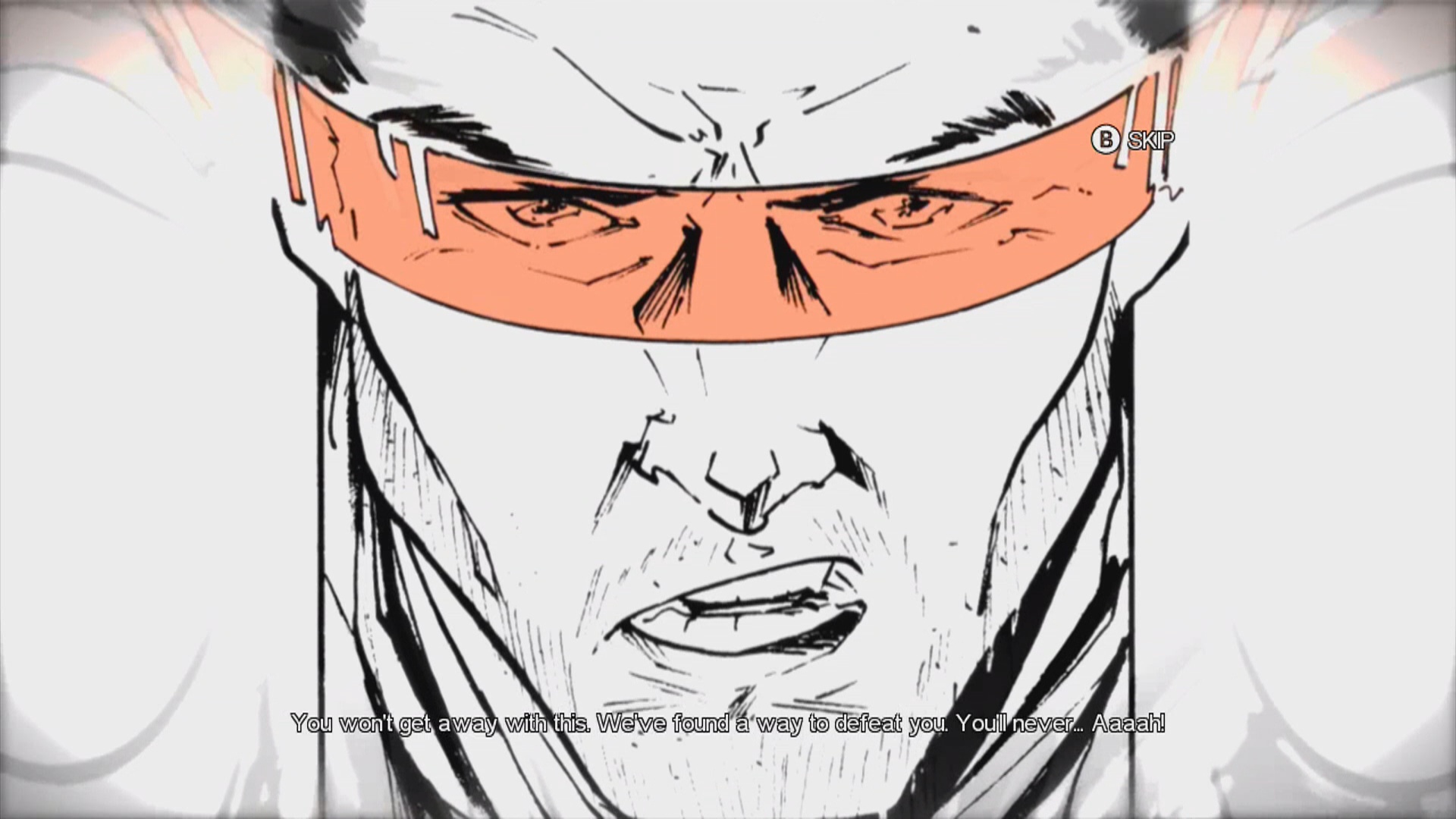 There are times when a relatable character can help save a faulty story, but Conrad and his supporting ensemble lend no hand. These bland caricatures only show slight signs of emotion during the uninspired, hand-drawn memory flashbacks which, sadly, serve as most of the game’s cutscenes. Not even Conrad’s imaginary love interest with Sonia—due to the fact that she is never actually seen on screen—is enough to evoke any sympathy or compassion from players.

This would not be the case if the voice acting was halfway decent, but it is a far cry from anything Oscar worthy; especially since the dialogue is comparable to the worst of those infamous low-budget films you’ll find airing at two in the morning. The delivery of lines, such as “awesome-sauce” and “the only thing I’ll ever be late for is my funeral”, is enough to recommend a mouth guard to prevent damage from grinding teeth.

There are only two features I can credit VectorCell with. The first is the look of the Flashback. Even though not every design is one I agree with, the settings stayed true to Quest for Identity. It was nice to see the vibrant colors of the jungle and the dystopian city of Titan with updated HD graphics. The second feature is the inclusion of the 1993 Flashback edition which is definitely more worthy of your time than its remake. 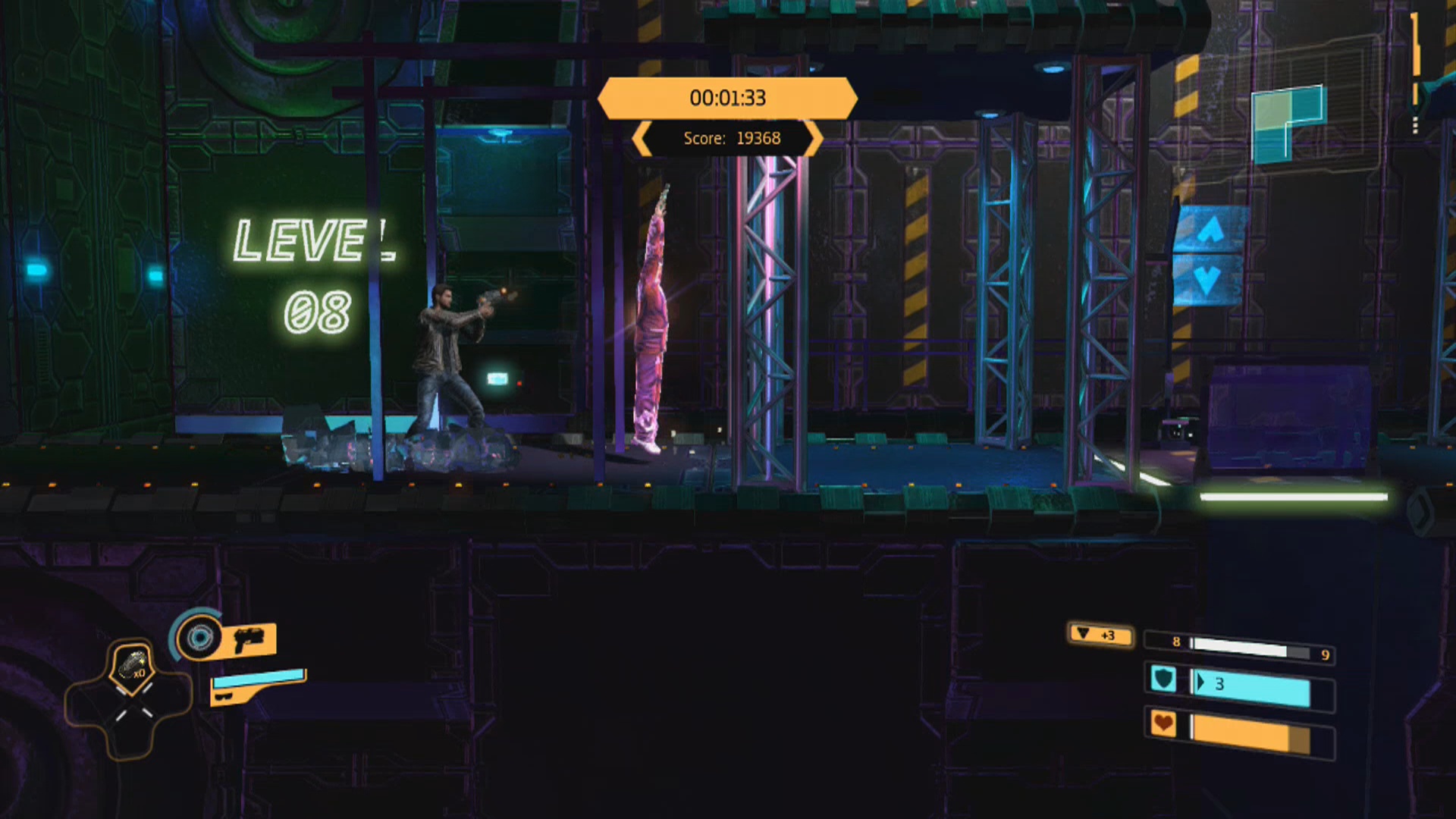 It’s disappointing, but the new generation will never understand what made the original Flashback special; especially when a remake tarnishes its beloved memory. Bland plot and unpleasant gameplay aside, the worst foul VectorCell committed with this remake is how it turned an atmospheric, sci-fi cinematic experience into a laughable parody. The original’s difficulty and distinctive grittiness presented an aura of danger around each corner. This danger, accompanied by a strong but silent protagonist, translated to the player that this alien invasion is a very serious matter. The remake crosses that out by creating a happy-go-lucky hero and placing him in a bug-infested romp that will frustrate more than challenge. Unless you plan to spend your time with the original, it is better to leave this flashback in the past.

Our ratings for Flashback on Xbox 360 out of 100 (Ratings FAQ)
Presentation
70
Though not breathtaking, the updated graphics hit the nostalgia keys as they breathe new life into old environments.
Gameplay
44
Controlling Conrad may be easier, but unchallenging, monotonous battles, incompetent AI and pointless attributes drag down the experience
Single Player
41
A short, cliche campaign fueled by bland characters and awkward dialogue ruin what was once considered cinematic platformer.
Multiplayer
NR
None
Performance
32
Frame rate issues, characters freezing on screen, and controls locking up will evoke frustration.
Overall
46
Flashback attempts to update a classic with modern mechanics, but some pointless additions and unpolished gameplay only serve to tarnish the original’s legacy. 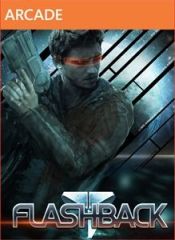 All videos for Flashback (1)
Advertisement ▼