Rise of the Triad Review

It's a real blast from the past... for better or for worse.

What's the most important thing for a game to be? It's a valid question, and I'm sure anybody could spool off a few positive qualities in a minute or so: a compelling story, exciting gameplay, maybe a spark of originality. I like to go for something a bit more general, and say that a game has a solid standing as long as it's not boring. That's all it takes, developers. I can be frustrated, flummoxed and even a bit nauseated, just as long as there's something in your game that keeps me interested. Rise of the Triad, the remake of the cult-classic Wolfenstein-like first-person shooter, understands this, and as a result it never harbours anything so much as a dull moment. Nevertheless, depending on your tolerance of poor design, living with Interceptor Entertainment's tempestuous new game might be more than it's worth. 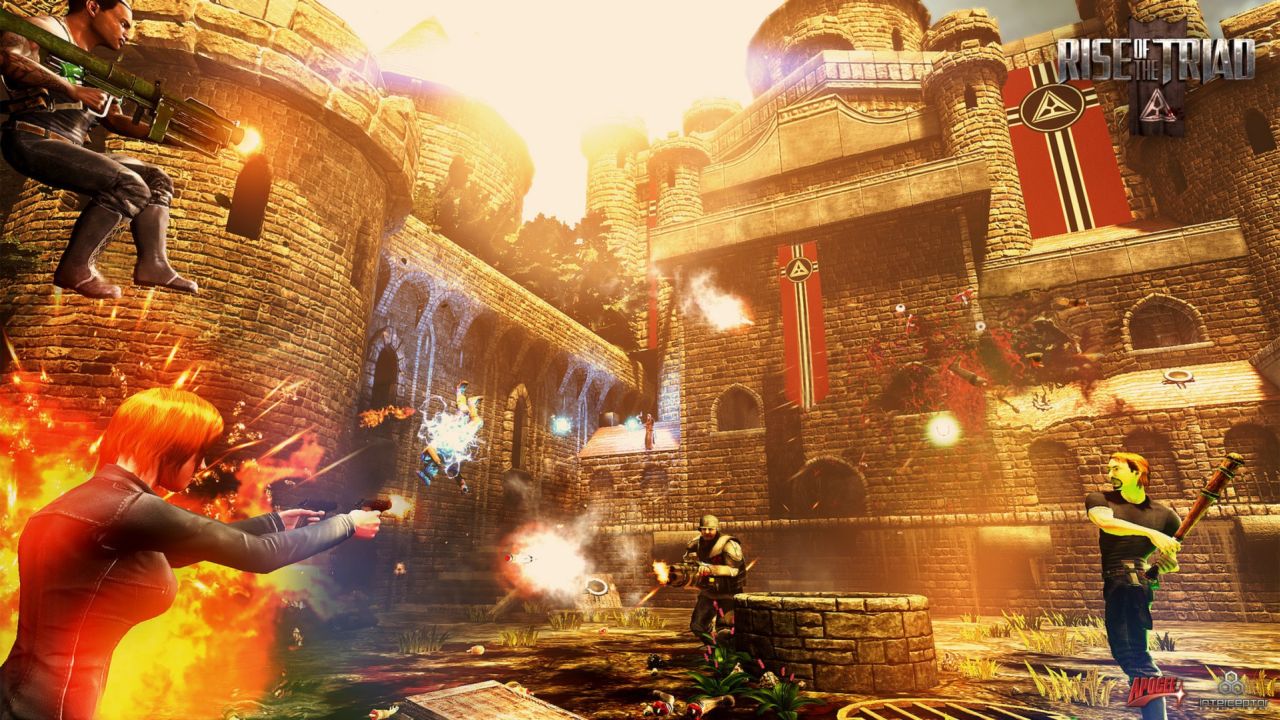 Rise of the Triad opens via a series of comic-book frames showcasing the preposterously-named H.U.N.T - the proverbial team of super-secret special operatives we've seen a thousand times before - being marooned on an island off the Californian coast while investigating a mysterious cult known only as the Triad. With their escape boat reduced to rubbery cinders they opt to instead storm the Triad's bases of operations in increasing order of difficulty, presumably on the basis that it's a lot easier to do detective work on a high-ranking cultist when their entrails are splattered all over the loading dock. It's not much to work with, but naturally the story is more of a background to the action than something you actually need to concern yourself with. Rise of the Triad takes the traditional approach and divides the island up into episodes - which seems a little bit redundant in an age where shareware is a quaint concept, but never mind - which are then further subdivided into levels. At the start of each level you pick whatever member of the team you feel has the most appropriate stats for committing manslaughter today, then the rest of them... I don't know, pile into your luggage? It never really gets explained. Anyway, you pick your operative, you pick your difficulty and then you're off on your merry way, and I want to offer a nugget of advice here: pick 'normal' difficulty. I don't care how inflated your ego is, you will almost certainly find the regular vanilla game to be enough of a challenge. Rise of the Triad is quite aware of its unforgiving difficulty, and manages to be quite the showoff about it. "Maybe you should stick to playing with a controller!" the game gloated to me once, after I died to a particularly difficult boss battle for the tenth time in a row. Thank you for those stirring words of advice, Rise of the Triad, and might I compliment you on actually wanting to provide a challenging first-person shooter experience for once? Good. Now shut up and let me play.

If you've ever played any old-school FPS, you know what to expect from Rise of the Triad. It's your standard bunny-hopping circle-strafing whoosh kapow genocide-a-thon that throws enemies and ammo at you like popcorn in a rowdy movie theatre and only stops for the occasional cheesy cutscene or level transition. Combat is ludicrously fast and fun, handing you new over-the-top weapons every few rooms and forcing you to toss them aside the moment they run out of ammo, which is an admittedly great way to keep players from becoming too attached to their favourite (potentially overpowered) murder device, as well as avoiding the traditional FPS problem posed by carting around a dozen assorted exotic weapons and only using your pea-shooter just in case there's a boss battle around the next corner. Powerups are available here and there to spice things up or reward the player for finding secret areas, ranging from God Mode (Become invincible and sling magic missiles like there's no tomorrow) to Dog Mode (Become an adorable testicle-munching canine) to Shrooms Mode (Motion sickness in a jar). Gore? Well, there's certainly buckets of that, but it's silly enough to remain mercifully light-hearted, a bit like Happy Tree Friends re-imagined as an action B-movie. The default reaction for an armed guard being shot in the gut is to be cleaved in two across the torso and coat every nearby surface in rich tomato ketchup, which certainly makes for an impressive spectacle, while explosions can quickly reduce roomfuls of foes into several pounds of chunky kibbles. It's gratifyingly overdone, and - ethical questions aside - an excellent way of rewarding the player for something they're going to spend the majority of the game doing. 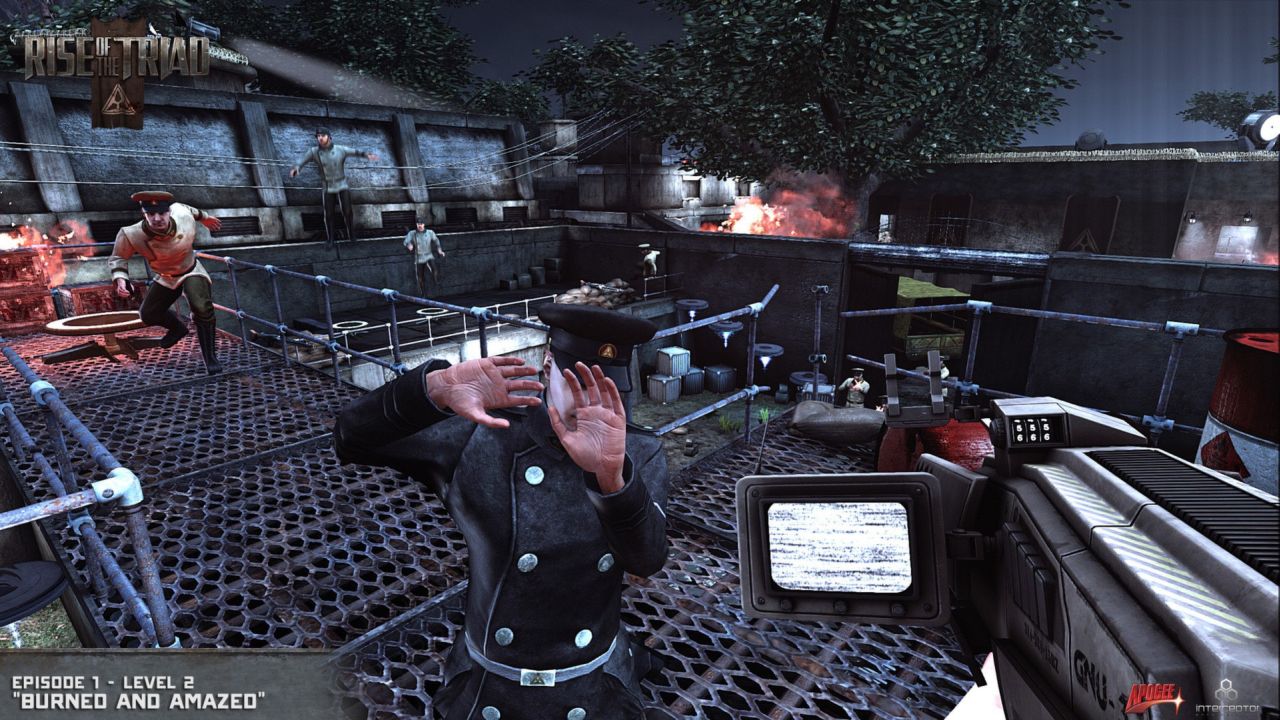 One of the few things I remember about the original - and consider this a luxury piece of insight because I happened to be a foetus at the time - was the way it struck a balance between being very silly and being slightly fucked up, and if you were the type of child that enjoyed burning ants under a microscope then you'll be pleased to hear that its 2013 progeny has inherited those particular qualities all over again. Enemies will occasionally drop to their knees and surrender, but if you leave them alive then they'll simply feign death and start shooting again the next time you turn your back, so the game essentially encourages you to cap unarmed goons in the head. Several areas throughout the game give you the option to execute a set of prisoners of the Triad - whose crimes we can only speculate at - in various comic ways, but it does give cause to wonder whether H.U.N.T is really a special ops unit or just a collective group of insane people with matching outfits and a very specific agenda. Rise of the Triad does make a fatal flaw with the silliness, however, and it's the same problem that has plagued countless other games to go down this route: repetition. Maybe hearing a macho quip from your character the first time you pick up the bazooka will bring a smirk to your face, but hearing it the second time won't. Nor will hearing it for the third, fourth or seventy-fifth time.

Oh, and how I wish I could leave it at that. I could walk away from Rise of the Triad, happy that the old-school FPS is alive and kicking with the best of them, and sleep with a sound mind knowing that I'd finally given a game a proper recommendation. Sadly if I did that I'd be a filthy liar with favouritism issues, because Rise of the Triad does not deserve a proper recommendation. If anything it deserves severe medical intervention, or possibly a hatchet blow to the back of the neck. 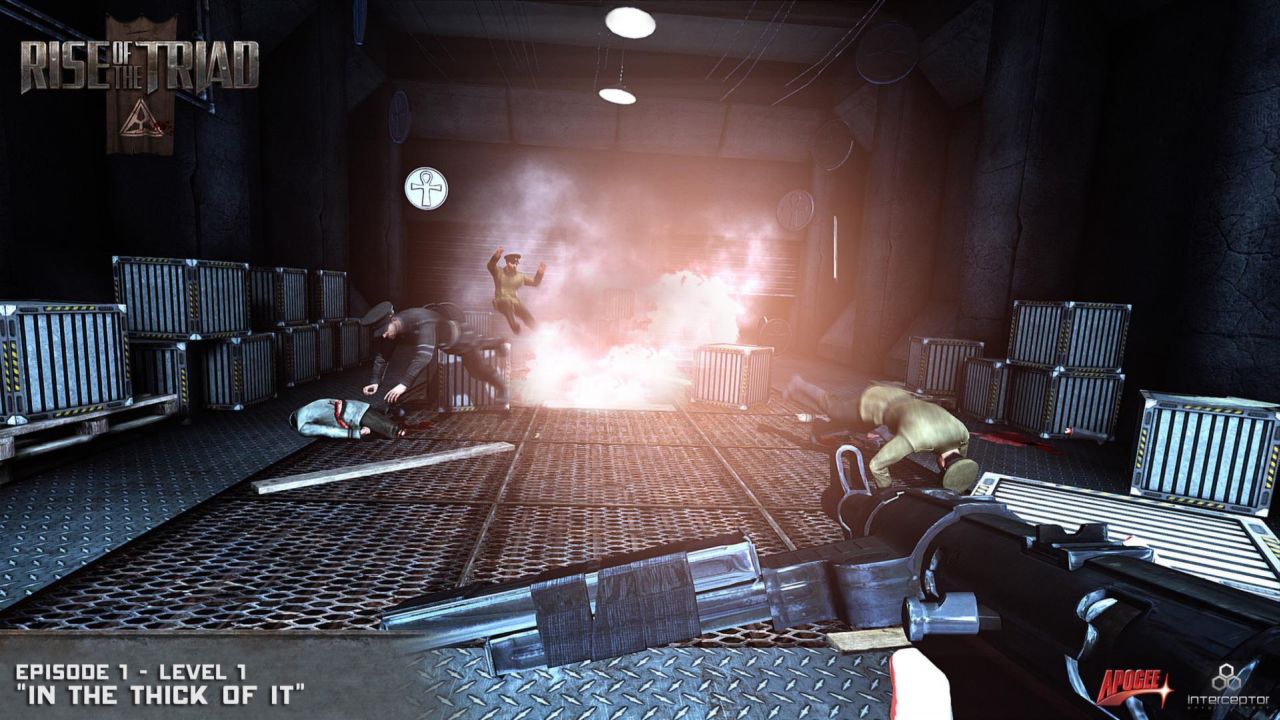 For starters, it's buggier than a cockroach sandwich. Not the kind of bugs you expect from a Bethesda RPG, the sort that get recorded and put on YouTube to the accompaniment of somebody's hysterical wheezing laughter, but the sort of bugs that get coined as 'game breaking' and prompt open speculation on whether the game was in fact tested at all. My favourite occurred when I was about to be squashed by a descending ceiling and, after opting to crouch on the off-chance it would stop mercilessly a few inches from the floor, I found myself clipping straight through the ceiling and sitting around on top of its black, featureless geometry, totally unharmed and a bit disappointed. That was perhaps the most benign bug, on the basis that it wasn't frustrating and didn't have to be experienced twice, unlike several others. Multiple times my weapon simply disappeared, as if my character had suddenly been overcome by a pacifist epiphany in the heat of battle, or I was suddenly and permanently rooted to the ground for no adequately-explained reason. Ragdolls became tangled up in level geometry on a regular basis (which was a bit of a laugh, really) and once or twice, so did I (which was not). Optimisation? Well, somebody must have thought about it at one point, but clearly nothing was done because the framerate chugs like a steam engine pulling St Paul's cathedral. All of these are just the tip of the iceberg in terms of the frankly embarrassing quantity of bugs that permeate the game's many facets, so consider everything mentioned here to merely be the most memorable. But so what, right? Patches exist. Bugfixes will happen, the game will be optimised, and Rise of the Triad will be a perfectly good game. Or rather, it won't.

Rise of the Triad 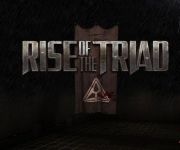