The team at Ska Studios are back with yet another stylish and over the top 2D brawler, Charlie Murder. With striking visuals similar to those of their previous works, the new game focuses on cooperative play as you fight your way through multiple levels and waves of enemies. The title has released as part of this year’s Summer of Arcade on Xbox Live, hoping to stand out as an indie release before the busy fall season of triple-A blockbusters. And while the game’s style is visually striking, difficulties in gameplay design and some repetition sour the overall experience.

The game takes place after/during a punk rock apocalypse. You (and others) will lead the punk rock band Charlie Murder on their quest to save the world from rival group Gore Quaffer and their legions of evil minions. To put it plainly, the game’s storyline is a bit strange and goofy in a dark sort of way, which matches the visual style quite well. Anyone who’s played games from Ska before, particularly the Dishwasher franchise, will be very familiar with the aesthetics here. Cartoon cutout visuals are memorable, as dark tones contrast against an abundance of blood and violence. Though impressive, it’s also something that players have seen before from the studio. The audio design is similarly quirky, focusing on heavy metal tunes to complement the action and some basic sound effects. 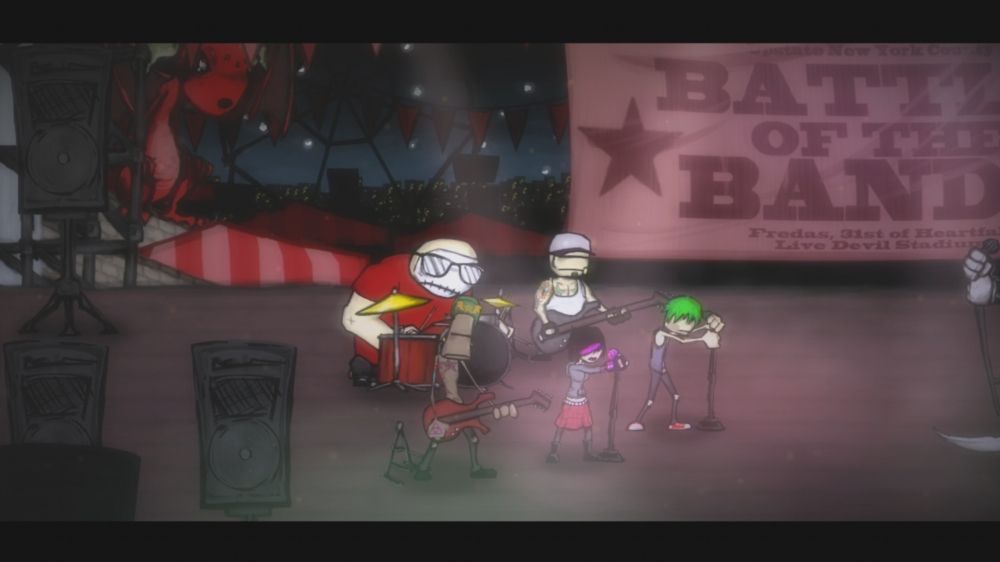 Charlie Murder can be experienced while playing as one of 5 different characters, and in either solo or online cooperative play. We’ll touch on multiplayer a bit later, so let’s assume you’ve decided to tackle the game on your lonesome just to get used to the experience and controls. As the game’s manual puts it, in a bit of self-referential humor, you’ll be bashing enemies using light and heavy attacks for most of the game. You can also throw objects and grapple foes, as well as jump. The gameplay design recipe here is a simple one, but it works just fine for an action title such as this. Controls are responsive and the mechanics make for a chaotic but still manageable pace. And though it sounds like a fairly simple button masher, the various mechanics involved as well as the difficult nature of the experience make it anything but.

As you enter an area, enemy waves will start spawning in, which you must dispatch of. The game is presented in a 2D dimension, but the action takes place in a somewhat isometric perspective so there is room to move up and down the screen. Players can use their melee skills to do considerable damage, but the environments are also littered with objects that can be picked up and used in a fight. Everything from car tires to machine guns to body parts is fair game. Most objects can also be simply thrown at the enemy if you wish to pick up another item, like a sword that was dropped. Most of the foes you’ll encounter will have both ranged and melee abilities; the former are much more annoying since being hit will often cause you to fall down, leaving you open for further blows. There are boss battles, of course, but they play out as you’d expect – you can kite them across the battlefield to avoid devastating attacks and get your punches in at opportune moments. 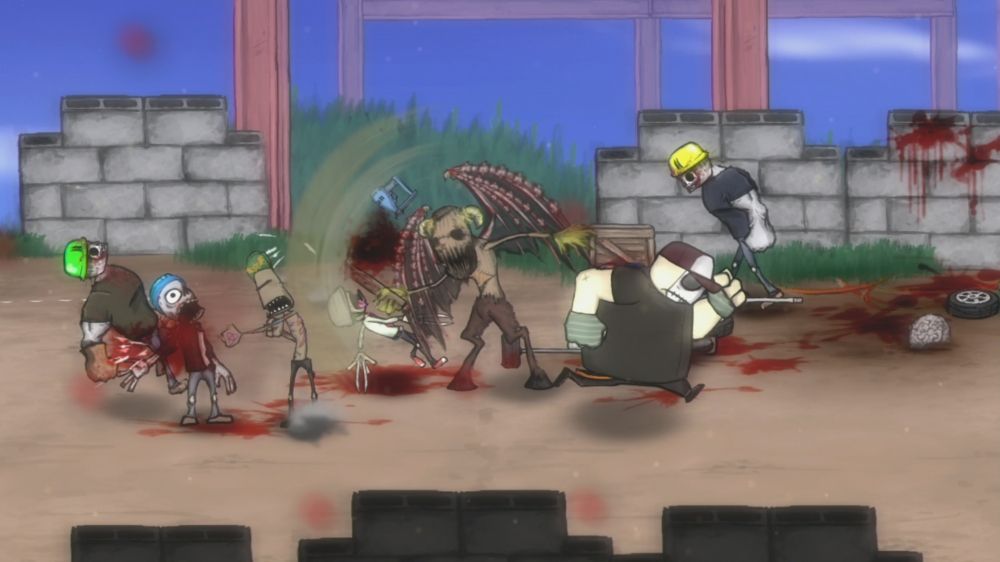 The action is frantic but manageable, as you can not only run away from the enemy in either direction, but also move up and down the screen to avoid the line of fire. That’s not to say the later stages can become excruciatingly punishing, with particularly cheap and strong attacks from enemies. In fact, the game is best avoided if you plan to finish it solo and aren’t a thriving self-abuser of the Super Meat Boy variety.

When you’re not battling in a stage, the game offers a wide variety of minigames of varying quality, for example a rhythm section that’s akin to a poor man’s Guitar Hero. You’ve also got safe areas where it’s possible to shop for items and get tattoos. Tattoos act as your ability upgrades, letting you unleash powerful attacks during combat. You’ve also got an item system, whereas the player can equip various items of clothing in a number of slots (head, eyes, shirt, fists, finger, etc). You will most often find items after boss fights, or can purchase them in stores from the money you’ve collected off fallen enemies. The items carry various boosts for attack, defense, and others that factor into your effectiveness in battle. You also earn XP, which is similarly used to directly upgrade your character’s abilities and unlock new moves.

It’s a fairly complex system, but falters somewhat due to its presentation. Everything in the game is relayed through your cellphone, which is annoyingly small and hard to read. So you’ll definitely need to take a moment to scroll through all the messages (many of which are cryptic and junk) in order to read the important stuff. Similarly, your inventory is a pain to manage and isn’t very clearly presented on screen. Still, players who have a health obsession with stats, loot, and RPG-like progression will find much to enjoy during their time with the game. 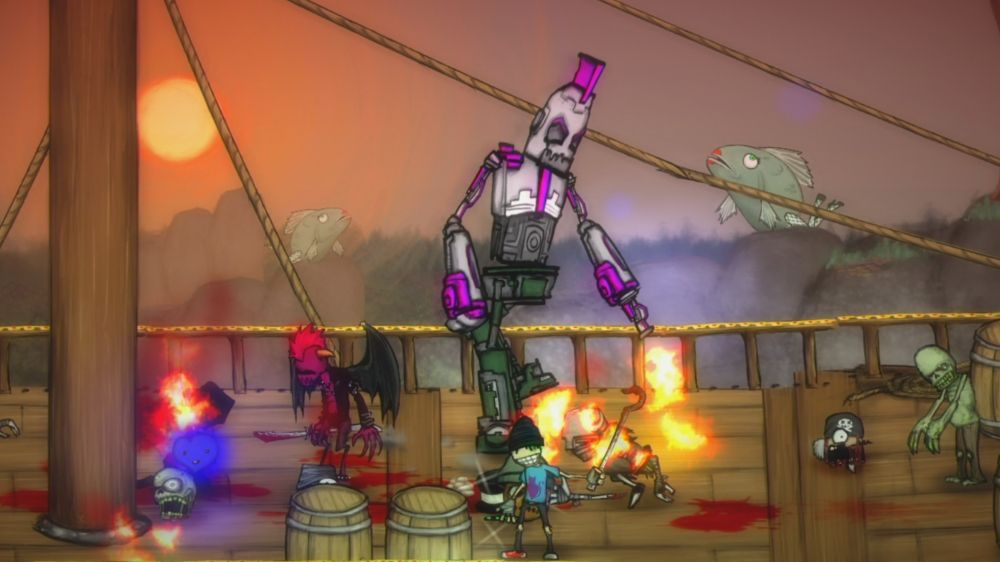 Some of the game’s difficulty problems can be alleviated by playing online cooperatively. You and three friends can take on the story mode and have fun fighting against the hordes. Assuming the matchmaking doesn’t fail to connect, the game is a seamless online experience with little lag, though the action gets inherently more chaotic with more players involved. You are also able to perform team attacks while playing with others, thus granting you better odds against bosses in particular. Should you die, your teammates can revive you with a QTE event that oddly slows down the gameplay for everyone. There aren’t any penalties for death and, oddly enough, you still gain tons of experience even as you lie dead and your coop partners fight on.

And herein lies a conflicting design decision. On the one hand, if you want to experience the game properly, starting from scratch and working your way through the story, leveling up and gearing up, you have to either play it alone or make sure all your friends are at the same pace. Otherwise, playing online with stronger players (the game makes no effort to filter you into a group of similar level) results in a power leveling stomp. As the leader of the group takes you into a later stage of the game, you’ll simply get killed by the first mob you encounter. And again, and again. But even after spending most of the encounter on your back and constantly being revived, you’ll gain enormous amounts of XP. Getting through just one battle and subsequent boss will thus net you over 20 levels of experience, though you contributed nothing and have no gear to match your newly found experience. It’s a super-boost of sorts, great if you want to play with friends no matter their progress in the game, but it completely breaks the flow. You are then faced with having to find appropriate gear, mass-level up your abilities / skills and pretty much be able to take on the final levels, bypassing everything in between. It’s understandable why the multiplayer is designed this way, but sometimes containing players to their appropriate level is a better option than throwing them into a meat grinder and power-leveling them through the game.

And that’s Charlie Murder. A downloadable title that oozes style and has enjoyable combat mechanics, though nothing particularly original. The multiplayer-focused design make it a treat for players who can get together and finish the game at the same pace, but everyone else will run into annoyances. Whether the difficult single player experience or online connectivity issues, this title takes a few turns down the wrong avenue. Perhaps most unfortunately, these shortcomings will likely prevent the game from being remembered for too much longer after the current summer season promo wraps up.

Our ratings for Charlie Murder on Xbox 360 out of 100 (Ratings FAQ)
Presentation
71
Memorable visuals and satisfying kills make this a visual feast, though one that fans of Ska have seen before. Poor UI design makes it difficult to use.
Gameplay
80
The action is well designed and can get chaotic, while the RPG mechanics fit.
Single Player
73
It is best to play solo if you want to go through the game and its progression as intended, though beware of increasing difficulty.
Multiplayer
65
While it's fun to play with others, the game doesn't try to match you up with players of the same level. Be prepared to play with uneven coop groups that will kill the flow of the game for your characters.
Performance
78
Some technical issues when trying to play online. Framerate holds solid at peak times.
Overall
72
Fans of The Dishwasher and general action junkies with friends will appreciate everything that Charlie Murder has to offer, but others may find the small problems in design to be an impediment. 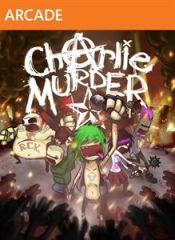 Our Review of Charlie Murder
72%
Good
The Verdict:
"A stylish and violent brawler that takes a few missteps in design"
Game Ranking
Charlie Murder is ranked #969 out of 1734 total reviewed games. It is ranked #88 out of 158 games reviewed in 2013.
968. Kinect Sports Rivals
Xbox One
969. Charlie Murder