Penumbra: Overture is a first person adventure horror game by Swedish developer Frictional Games. It is the first in what is to be a trilogy of titles. You play as Philip and well, he’s having a bad day. After attending his mother’s funeral he receives a letter from his supposedly deceased father that gives him information that lands him in Greenland. Philip soon stumbles upon a mysterious hatch frozen over and apparently forgotten by the world. Known only as the Shelter, Philip finds himself in an abandoned mine filled with puzzles, disturbing journal entries, and deadly inhabitants. Puzzles run the standard fare of finding the code, determining a way into locked room, locating a unique item to progress, etc. Though the puzzles are mostly generic they vary in difficulty, giving the game good pacing.

The physics play a key role in solving various puzzles and finding hidden items. The cursor acts as your hand and you point and click to drag rocks, open doors, and turn valves. Certain puzzles require you to make different parts of the environment interact with each other which changes up the traditional adventure game.

The story of Overture is told through various journal entries found in the environment and by messages written on the walls. Part of what compelled me to play through the game was to try and find out any little bit of information about the Shelter and what happened to its inhabitants. There is no health or stamina HUD giving the game a more realistic feel. When Philip is injured he becomes slow and the screen flashes red until he finds shelter or takes painkillers. One big flaw of Overture is that you don’t really get a sense of who Phillip is as he does not talk and what few of his thoughts are scribbled out never give you a sense of personality.

The game does an excellent job of providing tension and scares as Philip ventures farther into the mine and uncovers its secrets. Through searching the environment, you discover diary entries of people who used to work in the mine and the chilling entries are quite unsettling to read. Even more unsettling are the animals that patrol the corridors and have adapted to the mine’s unique environment. Blood thirsty wolves, mutant spiders, and a certain behemoth are constant dangers in the environment, but what really sells the horror and tension is the sound and lighting. Before you encounter enemies, you hear the patter of spider’s feet and the growling of wolves, the game does a great job of scaring with out showing. When spotted by an enemy, the music picks up as you decide whether to fight or run. There are no guns to defend yourself but there are several melee weapons that can prove useful if you can adjust to the horrible combat controls. To swing a melee weapon, click the mouse and drag it side to side. I found that when confronted by more than one enemy I would be in the process of swing and try to turn to see were the other enemy was and missing my attacker completely.

Enemies in the game are extremely powerful and can kill within a few seconds. Luckily, combat can be avoided almost altogether through stealth. Enemies are attracted to your flashlight or glow stick, however, crouching will increase your vision and when completely still, your vision dramatically increases. If Philip stands to close to enemies thou he will start to panic and his vision will begin to blur and shake. While enemies are powerful and deadly, if you jump on one of the many crates or barrels scattered throughout the mine, enemies cannot harm you. Halfway through the game, I found myself jumping on a crate, taking out my pick axe, and hitting my attackers until dead, and then proceeding through the area without caution. When enemies see you, they’ll chase, but the AI soon gives up, allowing for an easy escape. It really takes away from the whole, “I’m in peril” vibe when enemies start running away from you.

Graphically, Overture isn’t the best looking game on the PC, but it’s not the worst either. Everything is the same shade of grey and has a grainy look to it, yet this works to some extent with the dark areas. The game impresses upon you the age of the mine by detailing objects in rust, dated documents and old news papers. Being in a dark and dreary mine adds the feeling of claustrophobic tension as most of the environments are pitch black-luckily you have access to flares, a flashlight; and a glow stick to help you navigate the dark mine. The flash light is good for seeing long distances but it runs on batteries that need replacing after continuous use. Flares are a good source of light that you can throw bout don’t really illuminate that much and they have limited amount of light. The glow stick never goes out but gives you a short range of view and is mostly used when in tight spaces like air ducts or tunnels. Making the player decided which light source to use in which situation gives the game a survival element.

The game runs perfectly; even on my somewhat dated PC I was able to max out all the settings and the only slow down was momentarily when I destroyed a wall in the game. The controls, with the exception of combat, are great. I really appreciated the option of leaning around corners with either Q or E, as an aid when scoping out enemies. It took me about eight hours to complete Penumbra: Overture, making the game a little on the short side but at around $10 it’s long enough for its budget price. The player’s interest in Philip’s quest and the challenge of piecing together the mysteries surrounding the Shelter, will determine whether they enjoy the ending and have a compelling reason to purchase the next installment in the series.

While the combat is nothing short of terrible and the game is on the short side, Penumbra: Overture utilizes its physics system for puzzle-solving intelligently, while implementing a unique blend of tension and horror that really sets the standard for horror-themed adventure titles.

Our ratings for Penumbra: Overture on PC out of 100 (Ratings FAQ)
Presentation
85
A tense and sometimes disturbing atmosphere with a great physics and lighting system that compels the player to become absorbed in the world.
Gameplay
70
A physics system that works well when it comes to solving puzzles but when it comes to combat it falls flat on its face.
Single Player
86
A short yet overall satisfyingly frightening and puzzling survival horror title.
Multiplayer
NR
None
Performance
80
The game runs smoothly most of the time but when some part of the environment is destroyed the game has sudden slow down. This only accrued two or three times during my time with the game.

Overall
84
A great survival horror game that kept me playing based on its tension and atmosphere, yet my enjoyment was hindered when it came to the sloppy combat controls. 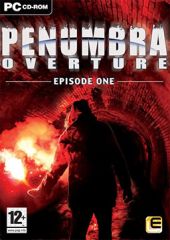