A recommended DLC package for anyone who enjoyed the original

As slow as Nintendo has been to adopt to the modern era of Internet gaming, the old fogeys behind today's most cherished franchises were at least quick to adopt one of the current gaming trends: downloadable content. With the 3DS, Nintendo has steadily adapted to the process of using paid content to increase the longevity (and revenue) of their games, starting slow with brisk challenge packs in New Super Mario Bros 2 and story-enhanced maps in Fire Emblem: Awakening.

But with the Wii U, Nintendo has now released their biggest DLC expansion yet in the form of New Super Luigi U, a complete reinvention of their original launch title New Super Mario Bros U. The Luigi-centric expansion comes in two flavors, digital and physical; the digital version requires the base game, either physically or digitally, in order to access the content. The physical version can be played on its own, but also costs an extra $10 USD. Regardless of which version purchased, the same content is present in both iterations of the game. 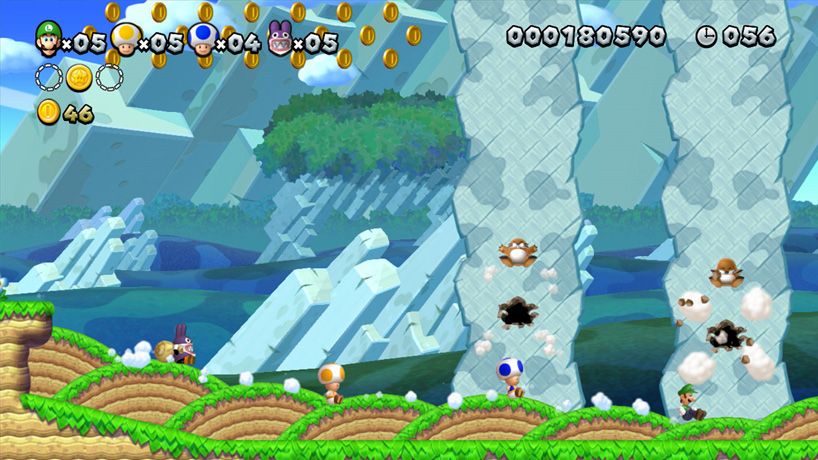 The story of New Super Luigi U is unchanged from the original... in fact, the only modification is the removal of Mario from the brief introductory and ending cutscenes (leaving only an undisturbed red hat behind, creating all sorts of unintentionally creepy implications). In a unique twist to the series, Bowser has invaded the Mushroom Kingdom and seized control of Princess Peach and her inhabitants. It's up to The Mario Brothers... sorry, the Mario Brother, along with two color-coded Toads to save the day. Taking the place of Mario during the multiplayer is Nabbit, the speedy rabbit thief from the original game (who will still plague players in the campaign, continuity be damned).

Anyone who has actively searched for Mario videos on YouTube may notice two common types of videos: speed runs and Kaizo mods. The former simply refers to attempts at finishing the game as quickly as possible, while the latter is in reference to modified version of classic Mario games (particularly Super Mario World) that replace the fairly difficult level design with brutally punishing, often impossible fan levels that require unorthodox reflexes and constant reloads of save states.

While New Super Luigi U is nowhere near as insane as either concept, it wouldn't be surprising if Nintendo drew inspiration from both to create the expansion, which is faster-paced and more difficult than any Mario platformer in the last few years. Put simply, Luigi U brings a difficulty curve not seen since the NES days of Mario games, completely redesigning every single level in the Wii U original to feature more instant death traps and annoyingly-placed enemies than ever before. 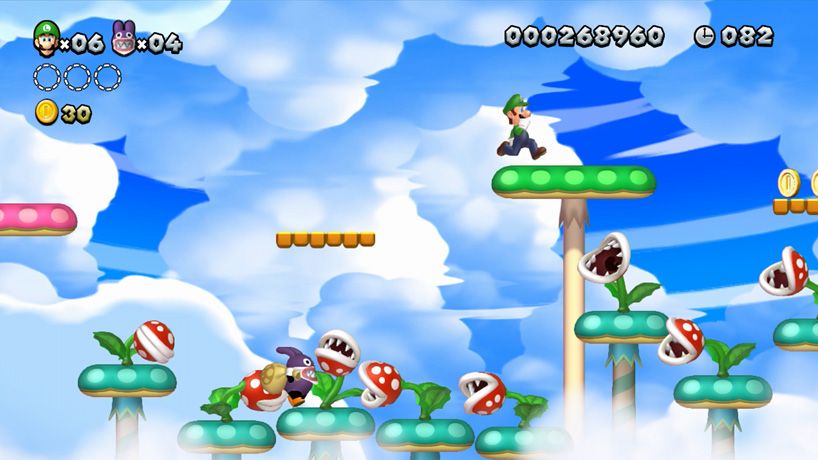 Adding to the platforming perils is a strict 100 second timer, forcing players to start every stage with a mad dash to the flagpole. In truth the levels are significantly shorter than the ones in Mario U: levels can be cleared in seconds, provided you're a professional enough platformer or just lucky. The frequent retries and lack of checkpoints will keep you from clearing the shorter game too soon, and may also prompt a few angry Miiverse posts (yet rarely will result in commenting during a successful completion).

With the renewed interest in brutal 2D games thanks to hardcore Indie titles like Super Meat Boy, New Super Luigi U feels like a welcome alternative take on modern Mario games with medium difficulty. Unfortunately, Nintendo did not take the progressive outlook all the way and failed to include one of the most important aspects of those tough 2D games: the ability to instantly start over. Just like in the original Mario U, losing a life will propel Luigi out of the level and into the world map, requiring players to select the failed stage again and wait a few seconds before restarting. Compare this to Super Meat Boy and other games that feature an instant reload, and it becomes apparent why this world map warp-out feels antiquated by comparison. Had Nintendo at least chosen to hearken to the original 8-bit days of stage reloads, it would have saved a lot of unnecessary downtime between retries.

More divisive is the way Luigi handles; in order to differentiate himself from Mario, Luigi is programmed to slide farther before stopping and also features a fluttering jump (a trademark for the character since Super Mario 2). The latter can prove quite useful in making those tricky jumps, but the former is more of an intentional hindrance. This slight unresponsive control will either inspire players to take up the challenge, or infuriate them. 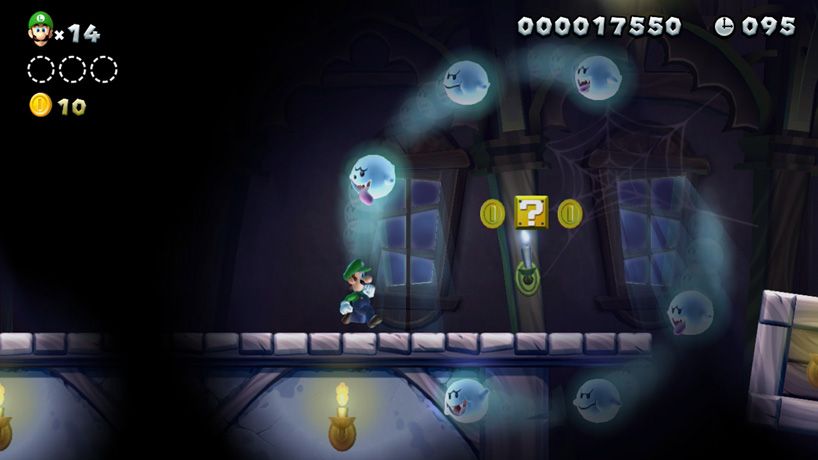 Beyond that, New Super Luigi U features the same technical qualities of its launch game predecessor. The visuals retain the simplistic but artfully appealing charm of modernized Mario games while also having the benefit of an HD resolution. That said, it's a shame that the bosses were not modified to be more challenging as well. Instead, they only appear more uninspiring and simplistic when compared to the heavily modified levels leading up to them. The lack of additional bonus challenges is a bit of a bummer as well.

While just a few technical clicks short of recreating that classic 2D frustration, New Super Luigi U is still a highly recommended DLC package for anyone who enjoyed the original New Super Mario Bros U but yearns for newer and more difficult content. To that, Mario's green garbed brother will be happy to satisfy that craving for an acceptable price, especially for players who choose the digital download route.

Our ratings for New Super Luigi U on Wii U out of 100 (Ratings FAQ)
Presentation
75
On a technical level, the visuals don't seem much evolved from the Wii's New Super Mario Bros outing. But the timeless Nintendo art style and HD resolution combine to create a visually pleasing platformer regardless.
Gameplay
80
Faster, harder, and more addicting than the original, held back only by the lack of an instant restart as well as love-it-or-hate it player controls.
Single Player
80
You get the same amount of levels in quicker doses, but are also more fun as a result. The hidden coins are also a lot less hidden, with their plain sight appearances tempting gamers to make impossible jumps and cursing through Miiverse over constant failures.
Multiplayer
65
Nintendo once again sticks to local play only, restricting one out of three players to be in charge of the Wii U gamepad (and thus unable to participate in the frantic three-man level trek).
Performance
75
The game loads as quickly as before, but not circumventing the warp to the world map really hits the brakes on the faster-paced experience.
Overall
75
A few leftover mechanics keeps this from reaching the same level of hardcore platformers today, but Nintendo's throwback to oldschool difficulty is still appreciated, and certainly recommended. All videos for New Super Luigi U (1)
Advertisement ▼