A disappointing case of another movie cash-in

R.I.P.D. the movie was released this past weekend, and chances are you didn’t see it – given the film failed to draw in any significant audience numbers. The premise of the movie saw a cop Nick Walker (Ryan Reynolds) get killed and sent to the afterlife where he is offered a position with R.I.P.D. (the Rest In Peace Department). His partner is RIPD officer Roy Pulsipher (Jeff Bridges), a lawman from the Old West. The two are assigned to retrieve "deados", renegade souls who have evaded the afterlife. Now that you know the setup, meet R.I.P.D. The Video game - an accompanying downloadable title that’s hardly more than a quick cash-in.

R.I.P.D. The Video game is an arena-based third person shooter that uses some elements of the film, but is otherwise wholly forgettable in both setting and gameplay. There’s no real reason to have seen the film in order to play, as there is no story to speak of. You get about 5 arena levels to shoot around in, and that’s about it. They are all available to play from the start, and there is zero narrative. The only relationship this title has with the movie, beyond the name, are the character models and location settings. Both Jeff Bridges and Ryan Reynolds are playable characters, but they are completely mute. The stages are taken from various sets in the film, but none carry any imagination or significance – ranging from generic locations like a ship yard or a rooftop. Replace the main characters, and this is a completely standalone and generic experience. 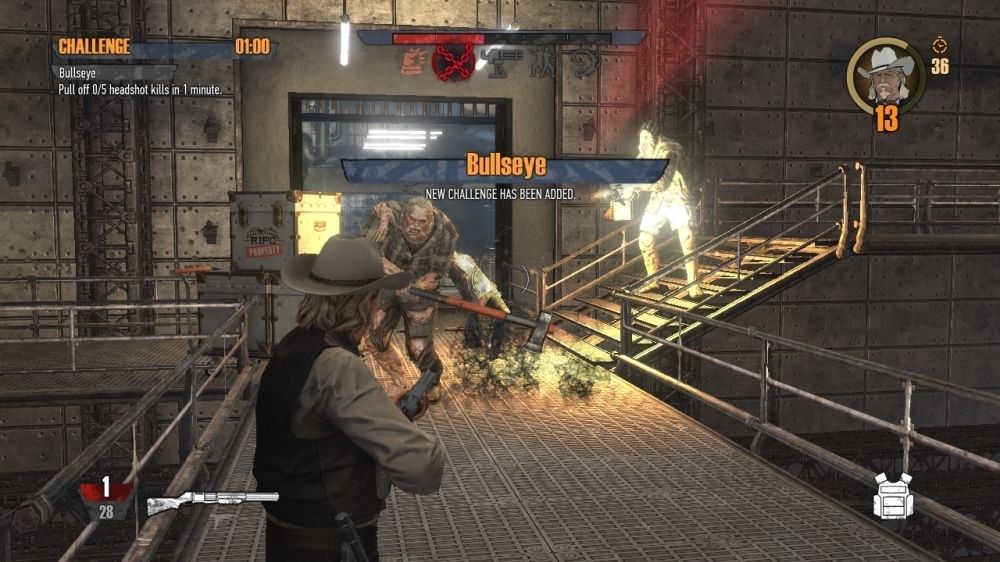 This is a cooperative online shooter, too, so you don’t get any single player content either. If you want to play alone, you have to create a custom private match. Selecting to play as either of the two leads provides no difference in the experience. Before jumping in, you can place bets with your coop partner on certain objectives, such as getting the most headshots, dying the least, and so forth. If all else fails, you can choose to just battle each other after the match concludes.

Each match consists of waves of enemies that must be defeated as you run around the area. There is a time limit to deal with, and also random challenges that appear throughout the match to help diversify things. You may be asked to get a certain number of kills, a certain way, collecting items, etc. It’s standard arena stuff, and nothing is inherently wrong with the design, but it doesn’t exactly make the game stand out either. Should you get on a roll and take down a bunch of enemies in a row, access to special abilities gets unlocked. You can drop healing beacons, lock enemies in place, or go on attack and use spikes to damage foes. These abilities aren’t overly imaginative and can’t be changed nor customized, always unlocking in a pre-set pattern. 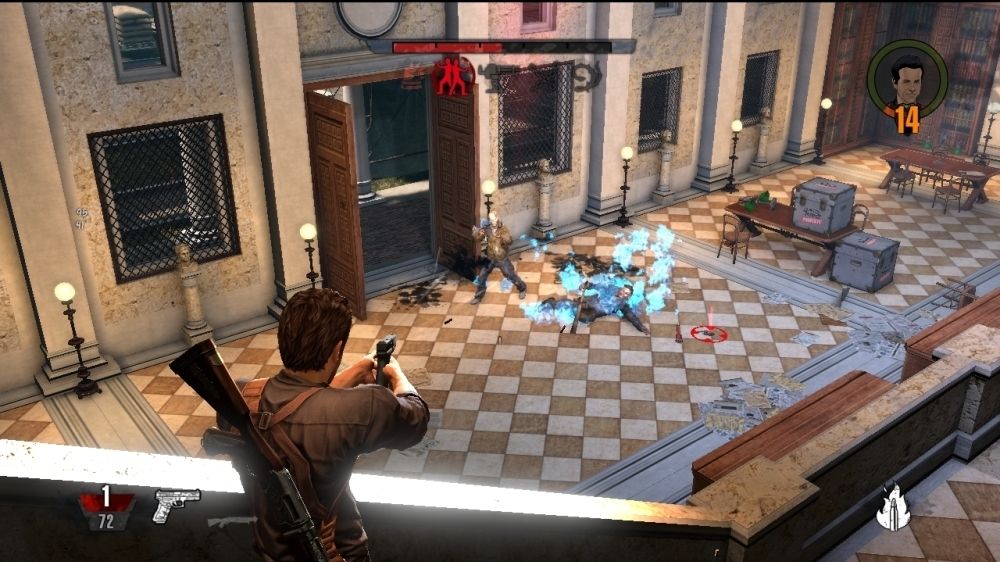 The gunplay itself isn’t very enjoyable. Your weapons feel somewhat weak against the onslaught of the zombie-like AI, who act even dumber than they look. Enemies generally just stand in place or run at you, depending if they are ranged or melee fighters. On PC, it defiantly feels that the controls are imprecise with some kind of artificial smoothing/acceleration being applied. Ammo is also increasingly scarce, only dropping randomly from certain enemies. Trying to take on the game on your own can be quite challenging (if you don’t exploit the AI), so it is advisable to play in coop. Online coop that is, as split screen is not an option.

After a stage is complete, the players are rewarded with cash. The reward is based on number of enemies taken down, challenges completed, plus whatever drops were collected directly. This cash can then be used to purchase weapons that range from the standard shooter loadout of shotguns, SMGs, rifles, and handguns. You can further upgrade the guns up to three times to increase their stats. Players can also choose to bring a one-time use item into the match, which provides a bonus throughout the game from higher damage to extra defense. Finally, amassing enough cash unlocks a special finale mission that’s much more in line with standard shooters – it’s a level that offers progression through an environment and a boss, and has some narrative. That is, after hours of suffering and grinding, you’re finally able to play something just a little more worthwhile. 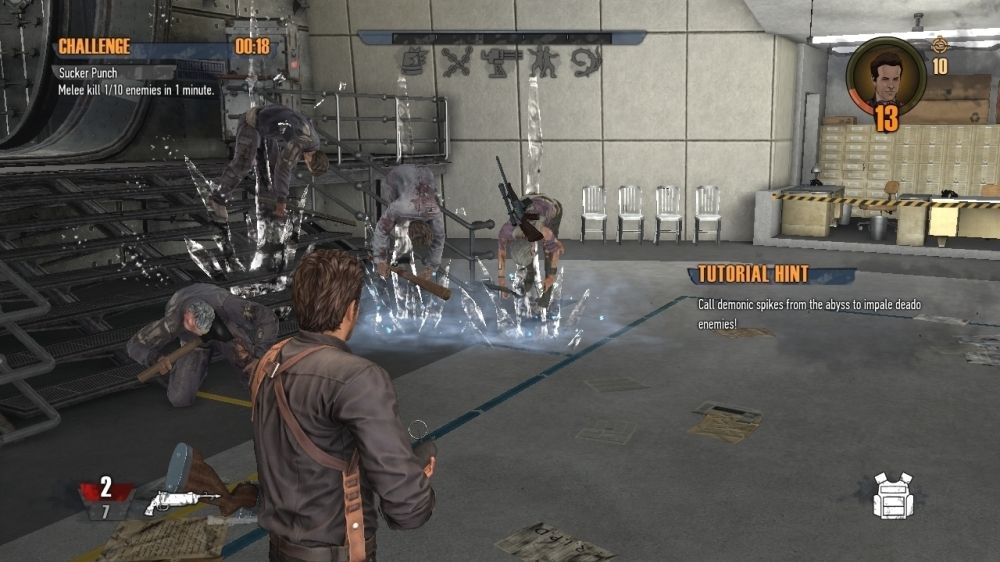 If there is one area where the game is strictly average, a good thing in this case, it’s the visuals. R.I.P.D. The Video game looks quite decent and runs at a steady framerate with many enemies and effects on screen. But then you hear it, and realize the developers scraped the bottom of the generic sound effects barrel. Guns sound unsatisfying and the audio is hardly worth talking about otherwise. Animations are basic and while the main characters are decently detailed, everything else in the game screams of low budget.

In a world where studios are still trying to cash in on the video game market alongside a film’s release, R.I.P.D. The Video game falls into the crowded category of being an uninspired disappointment. Its ideas are decent enough, but everything in the execution falters, with the final result being a game that’s not fun to play nor offers anything original that could tease player interest. It’s a hard sell to any self respecting gamer, even for just ten dollars. As for fans of the film, few as they may be, will do well to avoid this title as it doesn’t even try to cater to that audience.

Our ratings for RIPD: The Game on PC out of 100 (Ratings FAQ)
Presentation
40
Some decent visuals are undermined by poor animations and bare-bones audio design
Gameplay
35
Some of the progression mechanics are decent enough, but everything else - including the action - is derivative and feels low budget.
Single Player
20
Just a few arenas to shoot through, in generic locations and against some very dumb AI. Difficulty rather high when trying to survive alone.
Multiplayer
44
Has its moments when playing with a good friend in coop and just trying to abuse the game and its mechanics. Otherwise, not much fun.
Performance
(Show PC Specs)
CPU: Intel Core i7 CPU 930 @ 2.80GHz
GPU: Sapphire Radeon HD 5870 Vapor-X 1GB
RAM: 6GB DDR3
OS: Windows 7 Professional 64-bit

50
Runs without issues on modest hardware, but general physics glitches are ever present.
Overall
45
Not recommended to either fans of arena shooters or fans of the film. Everyone else should skip this title by default - it is sadly the stereotypical game adaptation that most gamers dread. 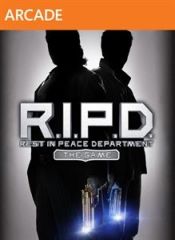