Strength of the Sword 3 Review

Remember those bits in Demon’s Souls when you finally overcame a tough stage or defeated a boss that had been smashing your broken body into the ground every time you scrambled through hell on earth just to get to him? Felt good, yes? Well, it’s a good thing you probably still have plenty to do in Demon’s Souls and Dark Souls, because despite Strength of the Sword 3 proudly wearing its tough difficulty badge with honour, it’s amateur hour when it steps into the arena with its rivals.

I like to think I have a fairly sound knowledge of games released in the last ten years, so it was with a mild sense of shame I accepted the task of reviewing part three of a series I’d never heard of. After my first hour with the game though, I was convinced something was amiss. How the hell had this monster managed to escape from a dev kit beforehand? Had it always been like this?

Well, no. This is the first game in the series. With the developers skipping to number 3 to emphasize how this would include all the good parts and a culmination of efforts as if it was riding the strong momentum of two previous games. Sequels are not a part of the developers’ plan as DLC will be the only way of expanding. Maybe they didn’t think of all the gamers that haven’t heard this reasoning and won’t bother with the game because they think there’s no point coming into a series having ‘missed’ the last two games. 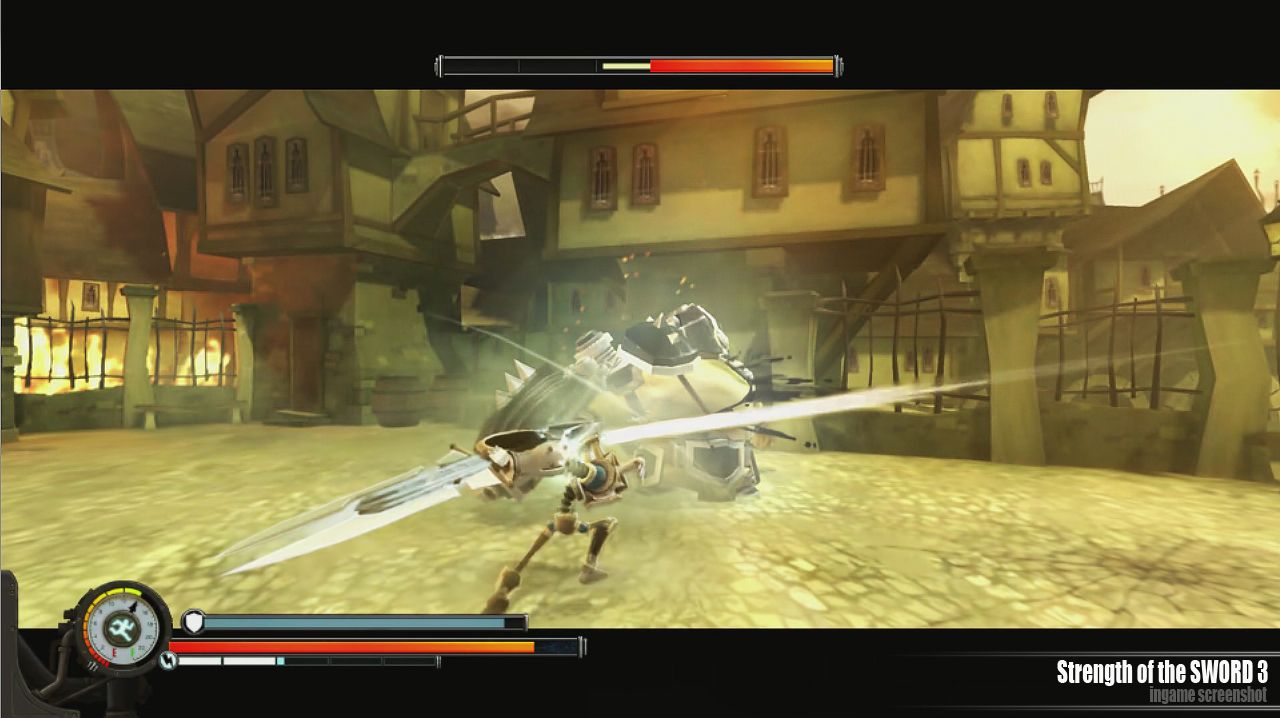 To focus on gameplay, the story is down to the barest of minimums. You’re a knight, fending off the forces of evil in a medieval fantasy setting. Goblins, phantom knights, wraith-like creatures. The usual sword fodder. Graphically it has a reasonably colourful art-style with nicely animated opponents, although there’s not much room for variety as opponent types don’t vary much and you don’t face many at once. The latter being a good thing as it turns out.

For your money, you get an arena fighter instead of a game with any stages to explore. Combat combos are a little thin on the ground and awkward to pull off. Square and Triangle take care of slashing and stab attacks, but you can’t just run in there like you’re playing God of War. Enemies are adept at blocking and your health bar soon comes crashing down. Carefully timed taps of the block button can result in a parry, giving you a brief chance to get a free shot in, but the system lacks consistency and your attacks often seem to go unnoticed or miss completely.

The dodge button is your best friend here. Crucially, it’s very responsive and allows you to dodge in tight circles around your opponent. This move is especially useful during boss fights, where an exclamation mark above them telegraphs unblockable moves. Special moves need to be charged awkwardly with R2, but you’ll need to be wary of attacks while doing so. Backing away to give you a bit of space in the arena is always a wise move. 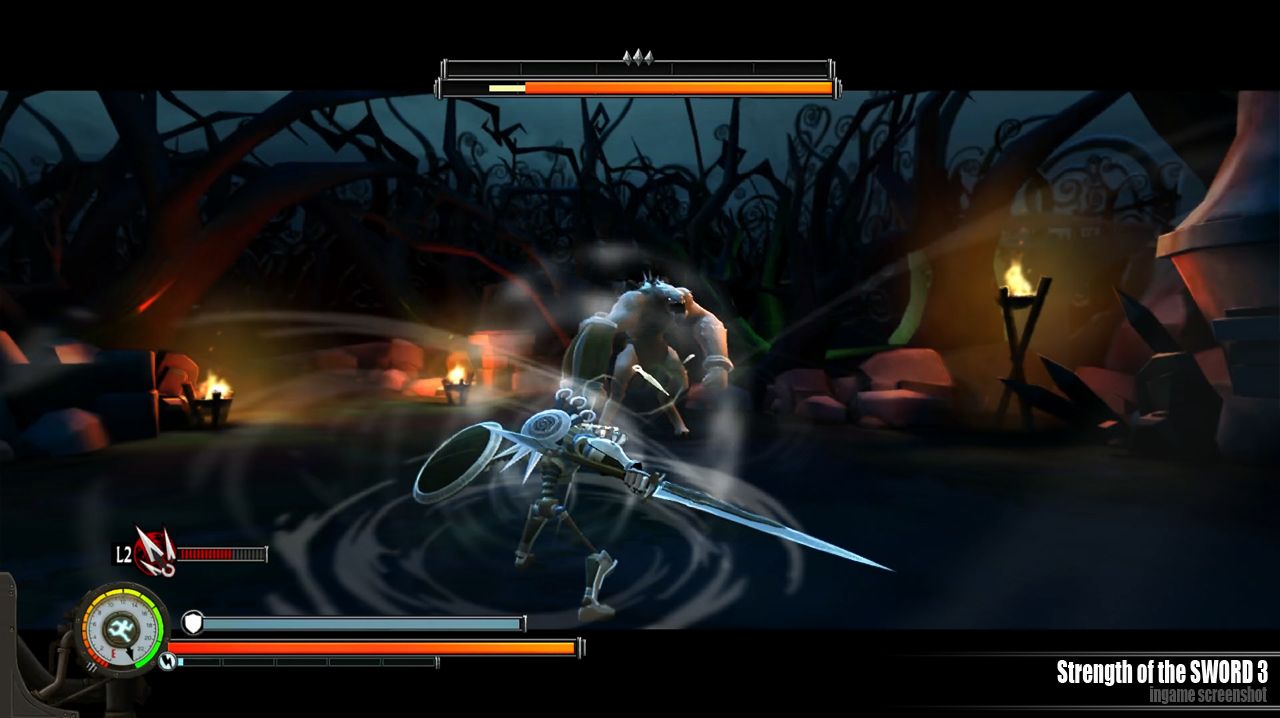 Taking on multiple opponents is one of the game’s biggest challenges. You can swap between targets with the shoulder buttons, but when foes attack simultaneously life can become very difficult, especially when you include the utter disaster that is the game’s camera. Considering the game is designed purely around arena combat, it’s inexcusable that the camera is so borked. The first time it renders the game almost unplayable is against the imaginatively titled Dark Night – no, not that one.

He’s standard boss fare, dodge his attacks them nip in for a few stabs before backing away. Part of the arena is on fire though, and when he disappears half way through the fight and leaves two goblin minions to take his place, you’ll find yourself dodge-rolling into the blaze or getting trapped in corners as the camera violently swerves around, hampering your sense of direction.

It tries to make things easier by making objects between you and the camera translucent, but the angles are slow to recover and you’re only a sidestep away from it going mental again. I can appreciate a game being hard, with tough enemies and a shy excuse of a health bar, but when I’m getting my ass handed to me because of a camera, I find my patience running thin. 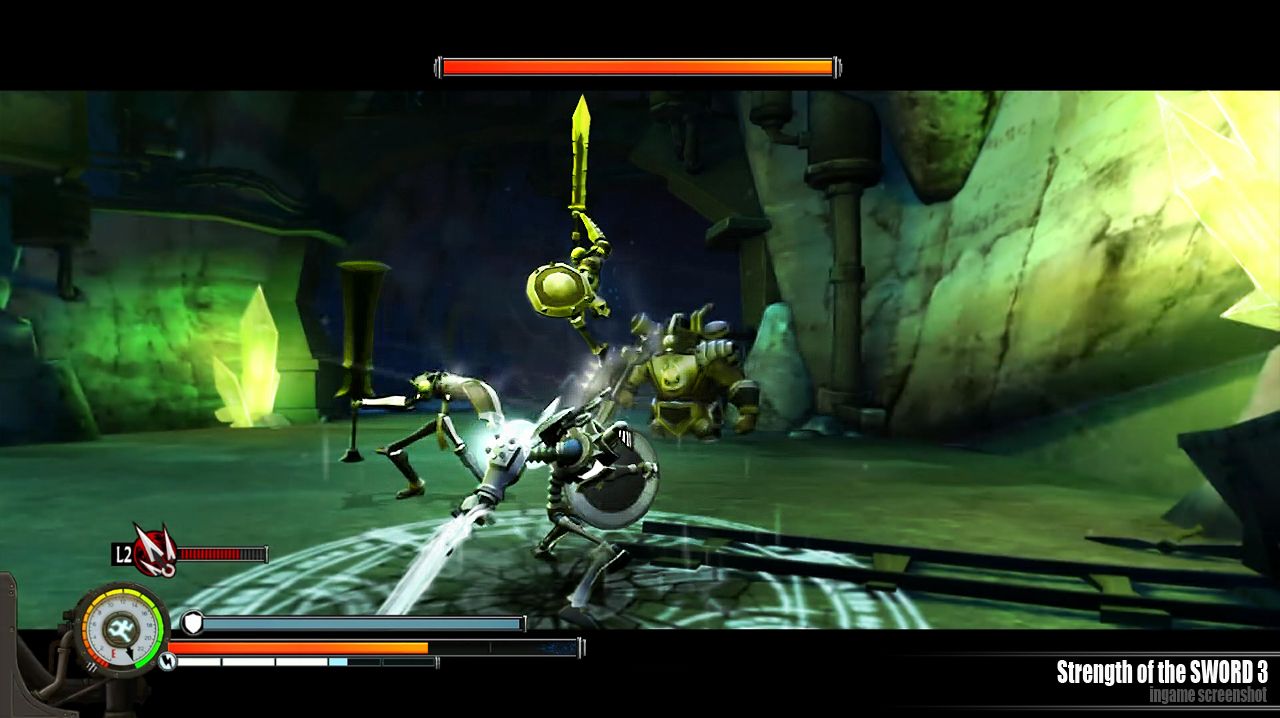 The use of slow motion is horrendously implemented too. Why they felt the need to add in unskippable and overlong sequences when you take damage near the end of your health bar is beyond me. By the time you’re given control again you already know that it’s all over as your remaining health is but a slither.

It’s not helpful when the slow-mo kicks in during one of your attacks either as it completely disrupts any rhythm or battle momentum you were building up. It doesn’t even look good, as the most random of moves are deemed worthy of a drawn-out bullet-time sequence. I’m glad the developers finally got around to watching The Matrix, but the rest of the world has moved on. Well, apart from Max Payne, he’s still enjoying scuffing the elbows on every jacket he owns. The big, sad drunky.

Anyway, enough cheaty reminiscing about games I’d rather be playing than this mess. Yes, the game was made by only a handful of indie developers, but even at £7.99 (UK-pricing), it feels overpriced. Add in that skilled gamers will rattle through it in less than two hours and everyone else will eventually bruise their way through it after many retries a few hours later. Or they might just stop playing long before.

Our ratings for Strength of the Sword 3 on PlayStation 3 out of 100 (Ratings FAQ)
Presentation
55
Bare bones, but inoffensive compared to the rest of the game.
Gameplay
37
Tough difficulty tries to mask the combat’s lack of depth or feel of skilled timing.
Single Player
30
A short and boring campaign consisting solely of arena battles.
Multiplayer
NR
None
Performance
29
The wayward camera will test your patience and makes many scenes unplayable.
Overall
34
The hardcore may try to argue the game’s merits because of the oppressive difficulty. But at the end of the day, the camera is terrible and the combat is dull and unrewarding. With arena fights being the sole focus of the game, it’s all too apparent that it’s lacking in almost every department. Save your money for a new self-flagellation toy and a pre-order of Dark Souls II.

Strength of the Sword 3 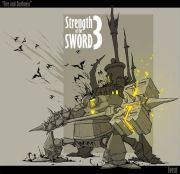