Time-traveling, wristblade-toting, cultist-killing assassins just aren't enough, apparently. So it seems for Ubisoft, at least. The developer is perpetually on the hunt for the next mechanic it can graft onto the side of its popular Assassin's Creed franchise. The series' annual iterations have seen additions like tower defense and sailing tacked onto their free-running core, with varying degrees of success.

The latter made its debut in Assassin's Creed 3, a game I didn't play, but did demo at last year's E3. I was impressed with the sailing mechanic then, and for all the mixed reviews of the larger game, that particular facet seems to have been well-received. But can it hold its own in a more central role? That's the question facing Assassin's Creed 4: Black Flag, which ports the assassin stylings over to a pirate's life sailing in the West Indies. I took some time at this year's E3 to walk through the game's single player component to see how it's faring at the task. 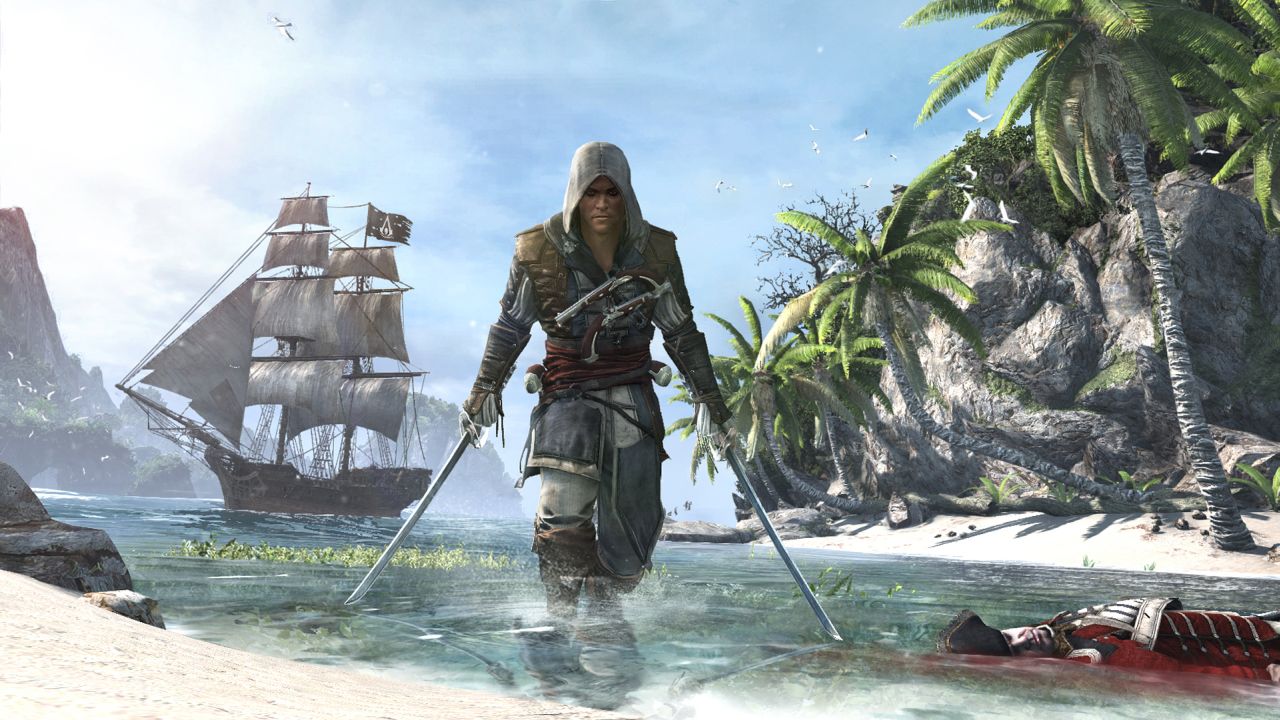 The demo began in a small, but boisterous seaside community. Protagonist Edward Kenway stood within it, clothed in the now traditional white hood of the Assassin order. Pirate though he may be, he’ll still be taking on assassination contracts, and this particular one involved killing to imperial captains roving about the town. The first went down simply enough: Kenway set up shop at a nearby bar, and when the enemy sauntered too closely, Kenway slammed him headfirst into the bar. It was an effective technique, but not the most stealthy - the other captain saw the deed, and took off running for his nearby ship.

The player took out one of Kenway’s dual pistols and trained it on the fleeing commander. It would have been a trivial matter to put a musket ball in his backside, but instead she opted to let him reach his boat (the better to show off Black Flag’s seamless transition to sea travel). The player gave chase in Kenway’s own ship, the Jackdaw, only after giving the enemy a sizable lead. Fortunately, tracking him down wasn’t too taxing. The Jackdaw is a capable ship, and can be upgraded over the course of the adventure with different types of weapons, ammunition, and crew. 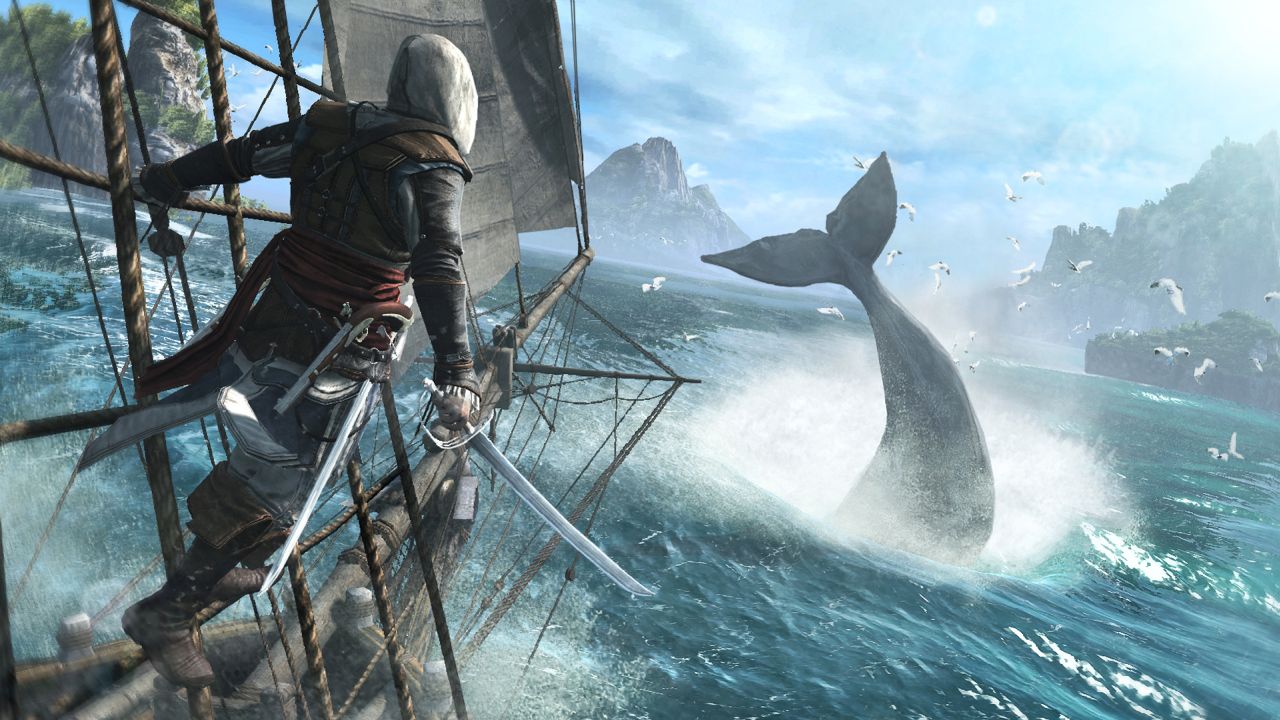 From its deck, Kenway spied the enemy ship fleeing along the azure coastline, dragging some floating cargo. The Jackdaw quickly caught up, disabling it with a volley of cannon fire and pulling aside in preparation for boarding. As Kenway’s crew engaged the soldiers on the crippled ship’s deck, the player took him up his ship’s crow’s nest to jump the gap. It was in this process that a few quirky animations reared their ugly head, as the player struggled to get Kenway to grab onto the right parts of the ship to make his way across. Once there, however, he quickly dispatched with the captain using his patented leaping wrist blade stab (I was told that Kenway’s crew will politely leave the killing of such assassination targets to their boss) .

The enemy defeated, Kenway piloted the Jackdaw over to a tiny, nearby island and leapt into the shallows. After swimming over to land, he found a dead body clutching a treasure map. The map lead Kenway to a larger island housing some ancient Mayan-looking ruins, as well as an encamped band of Spanish soldiers. Rather than engage the troops, Kenway took a scenic route through some overhead trees, but not before shooting one unlucky soldier with a toxic dart from his new blowgun weapon. Once struck, it wasn’t long before the soldier began lashing out at his compatriots, creating an effective distraction. 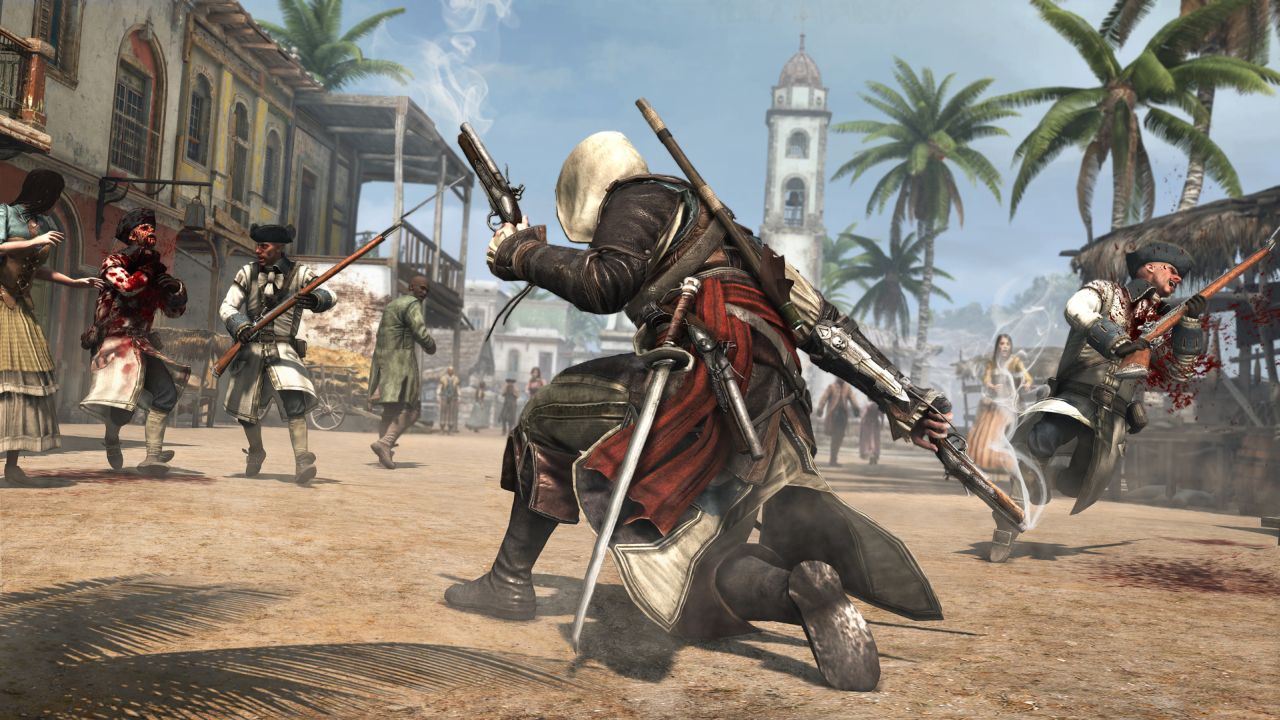 At the spot designated by the map, Kenway was prompted to dig, and found his buried treasure. The Ubisoft representative informed me that, contrary to popular portrayal, pirates didn’t really bury their spoils, so this chest contained a blueprint for a ship upgrade rather than a stack of golden doubloons. Blueprint in hand, Kenway made his way across the ruins to a nearby vantage point, which prompted the panoramic shot that Assassin’s Creed fans should be familiar with. With that, Kenway made a leap of faith, landing in the clear waters below.

There’s a lot of promise in Assassin’s Creed 4: Black Flag. It remains to be seen whether it will reach it, or if the game will be tripped up by some hidden misstep, but right now things are looking swell. The map is huge, spanning 3 major areas and a great number of smaller islands, and a bit of verticality has been artificially added to this portrayal of the West Indies in order to give Kenway things to leap off of. The visuals are impressive, with a colorful palette and a solid draw distance within which distant naval battles and dangerous weather conditions like storms and waterspouts can be seen. The features may have stretched so far away from the original Assassin’s Creed premise that it seems strange to moor them to it, but there’s undoubtedly a lot of potential here, regardless. Assassin’s Creed 4: Black Flag is planned for launch in late October on Xbox 360, Wii U, and PlayStation 3. Versions on PC, Xbox One, and PlayStation 4 will follow.