For someone like myself, who hasn’t played the more traditional Ninja Gaiden offerings, Yaiba: Ninja Gaiden Z makes for a pretty strange introduction. It tells a non-canonical story that branches from the other games, and puts you in the shoes of Yaiba, a rival of series protagonist Ryu Hayabusa. An introductory cutscene establishes the premise: after a flashy fight with Ryu in a bamboo forest, Yaiba is the one who comes out worse for wear. In a battle between ninjas, that means having one’s head and left arm forcibly separated from the rest of his body.

It’s an inauspicious debut, to be sure. But when you’re handed control, Yaiba is very much alive, now sporting a cybernetic arm and a big glowing red eye. Indeed, he’s a bit of an 80’s action cliche, and his dispassionate humor and tendency towards one-liners will really drive that impression home. Ninja Gaiden Z has its tongue firmly planted in its cheek, and is clearly intent on pushing the limits of its wild premise. If it still doesn’t sound that wild to you, you should know that the “Z” stands for zombies. 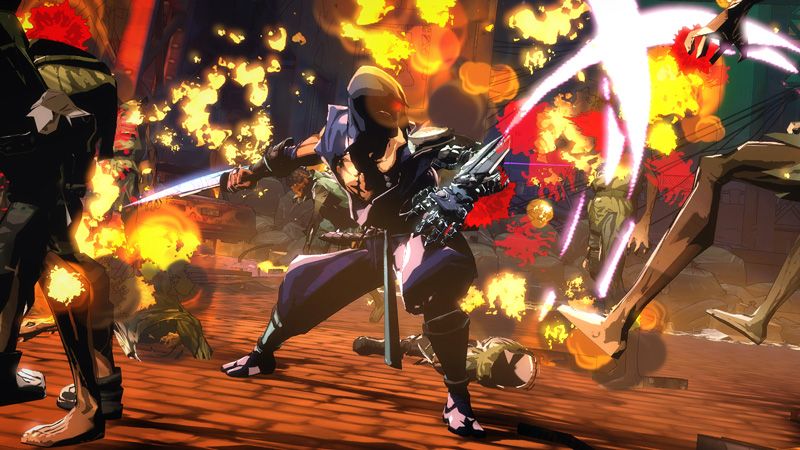 Yep, it turns out that Yaiba: Ninja Gaiden Z is looking to explore the heretofore untapped potentials of the ninjas versus zombies genre. In fact, the art style itself has a cel-shaded look that gives the game a comic book aesthetic, calling to mind The Walking Dead. The difference being that here, attacking zombies are an invitation to some violent mayhem.

Nominally, Yaiba is searching for some sort of generator that will, presumably, bring him a step closer to his goal of revenge against Ryu Hayabusa. In practice, however, he’s just out to commit zombie genocide. They swarm in towards him as he rounds the corner of some industrial-looking buildings. Prompts instruct you on the basic moves, but it’s mostly pretty intuitive stuff: square to slash, triangle to punch, R1 to block. In this early stage it’s unnecessary to use any of the nuanced techniques; button-mashing seems to serve just fine, but it’s worth playing around to see some of the interesting animations Team Ninja have given Yaiba.

The zombies are as much a foe as they are a potential weapon, you see. Yaiba can rip off their arms for an improvised set of nunchuks, or hook a hapless walker and use him as a the figurative ball of his literal chain. Each action results in a campy splattering of bright blood, and a pun spelled out in comic font: “ZOMBIFRIED!!!” says one after I’ve set an enemy alight. Do enough damage to any one enemy and a button prompt will appear over their heads, inviting Yaiba to decapitate them, stomp them into pulp, or perform some other creative manner of disfigurement. Killing enough foes filled a meter that triggered a “bloodlust” mode, wherein Yaiba zipped around the stage instantaneously, slicing up zombies. 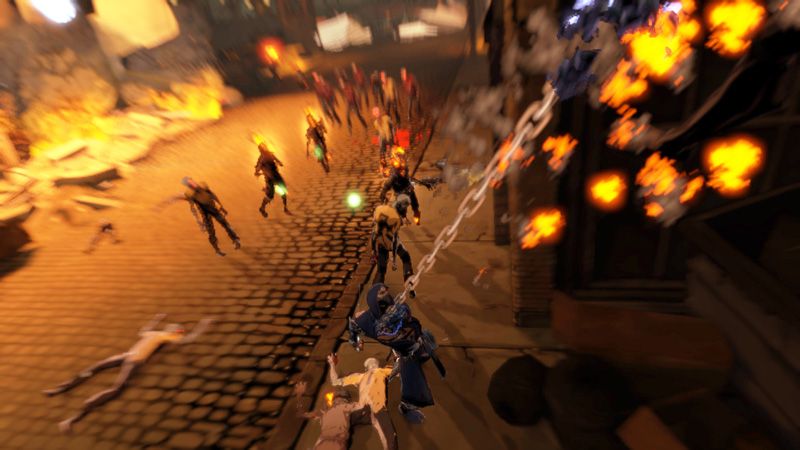 Amidst all that zany action, it can be a bit easy to lose track of what’s going on. Yaiba can block to set up counters, but it can be difficult to time properly with all the movement on screen. It’s also hard to tell when you’re taking damage. Also, while Ninja Gaiden Z is in an early stage of development, it’s nevertheless suffering from frequent frame rate drops and some vicious screen tearing. In a more self-serious title these issues might be more damning, but the game seems to be shooting for a more lighthearted experience, and never became overly taxing.

In addition to moving down zombie hordes and building up combo meters, there’s some light platforming to be had in Ninja Gaiden Z. It seems to be used primarily as a means of breaking up the battles. Pressing a prompted button causes Yaiba to leap onto the side of a building or object, and subsequent presses allow him to vault acrobatically through the environment to the next battle scene. I had some issues with this during my playthrough - it turned out that I wasn’t able to see the button prompts while I had Yaiba’s “cyber vison” (a sight mode that shows points of interest in the surroundings) active.

After one such section, Yaiba comes upon a strip club (or sex shop - it’s a bit unclear) with a pair of decorative, fishnet-covered legs sprouting from the top of it. He hooks a nearby zombie and throws him into a tanker truck, which the zombie inexplicably starts driving. The truck hits a ramp and flies into the spot between the legs, blowing up the building spectacularly. As a glowing light appears at the point of contact and a choir of angels sings, Yaiba, arms outstretched, is bathed in raining panties. 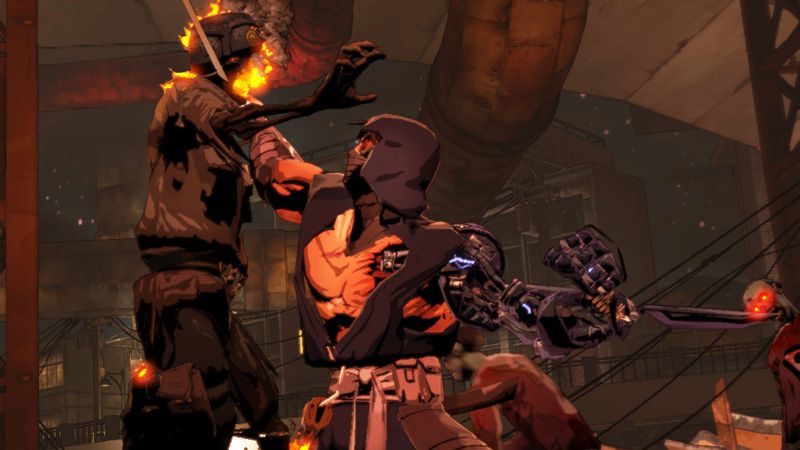 Before I’d the chance to wrinkle my nose at the spectacle, a fire-spewing boss appeared from the wreckage. He went down easy enough with some liberal use of Yaiba’s rocket punch, a charge-up ability that blasts through a line of foes. Pressing circle when near the stunned boss caused Yaiba to rip off his head, which he then used as a sort of organic minigun to blast away a second charge of zombies. Clearing them out resulted in a cutscene, in which a ghastly, giant, two-headed zombie baby entered the scene, ending the demo.

Yaiba: Ninja Gaiden Z is looking a little rough around the edges, but it seems self-aware enough to pack a lot of wisecracking and violence into all the available spaces around its stylistic action core. Fans of the other Ninja Gaiden games, or lovers of DMC might find it up their alley, especially if they enjoy comic violence and some dramatically over-the-top humor. 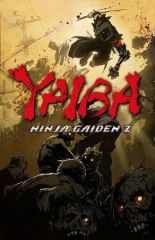 1628. Transformers: Rise of the Dark Spark
Xbox One
Related Games