Check if you should take care of your lawn better, in case of a zombie apocalypse

Forget boarding up windows and grab a handful of seeds and some sunlight as it’s the only effective way to kill the hordes of zombies that are threatening to, "Eat your brains!" At a first glance Plants vs. Zombies seems like a regular tower defense game with you building turrets to destroy various waves of creeps, but a creative premise, wide variety of mini games and creative plants and zombies make this game stand out. When booting up Plants vs. zombies the only option is adventure mode, but after several hours you will unlock puzzle modes, mini games and a survival mode. This not only gives the game longevity but it breaks up the standard formula of setting up turrets and destroying the various waves of zombies by presenting players with different objectives and obstacle.

Adventure mode is broken down into 50 or so levels introducing new zombies that vary in toughness and abilities. Some zombies wear cones on their heads making them more difficult to destroy, some carry ladders to climb over obstacles and even zombie bobsledding team?! The wacky character types certainly mix up the game play were you have to take into account which enemies you will be facing during each level. After every ten levels you are given a new “lawn” to defend which increases the difficulty from plain backyard to defending your arched roof. There are even levels set during the night which prevent you from using certain plants which makes you drastically change your strategy. The most difficult levels are when the “lawns” introduce fog and cover half of the lawn obscuring your view and giving you less space to plant turrets. It took me roughly ten hours to complete the adventure mode which by the end of it I felt was a little easy. Only the last few levels offer much challenge and I found that I was struggling due to picking the wrong plants not my overall strategy.

After each level you are awarded a new pack of seeds which unlock a new turret defense. To purchase your plants you will need to collect sunshine that either falls from the sky or that is produced from various turrets that produce it. You will also periodically earn coins from either fallen enemies or if your last line of defense survives the level. Your last line of defense ensures that if a zombie gets behind your turrets that it isn’t automatically game over and destroys a row of zombies, but this only works once for each row. The plants themselves are very creative and all have their own strengths and weaknesses. Your standard turret is a peapod that shoots peas at incoming enemies and once you progress farther into the game you unlock other variations of the plant and others.

The art style is very well done and gives the game a sense of personality for example when some plants are being eaten they start to look worried and cry and some zombies grunt and their reactions change when attacked. The art style is very well done giving each of the plants their own unique and distinguishing look while most of the zombies look the same but with small additions here and there. The games soundtrack is also very enjoyable and while most of the tracks are variations of the games main theme it is still catchy.

The games only real narration is crazy Dave who house you are protecting. Dave doesn’t speak, but yells and grunts orders at you before key points in the adventure mode. After a few levels he finds the keys to his car were you can purchase upgrades for your seeds and extra seeds to use each level. While narration for a tower defense isn’t necessary or needed, having crazy Dave gives the game a real sense of charm and sense of humor which I appreciated.

Plants vs. Zombies is one of the best tower defense titles on the market. While the adventure mode doesn’t get very difficult until the very end it doesn’t stop the game from being fun, charming, funny and proving yet again that Popcap are the kings of casual gaming.

Our ratings for Plants vs Zombies on PC out of 100 (Ratings FAQ)
Presentation
85
Smooth graphics, easy to pick up and play for minutes or hours and a genuinely original theme.
Gameplay
85
While gameplay is fun, strategic, addicting and unpredictable it isn't terribly difficult until the very end, though if you don't pick certain key plants defeat is inevitable.
Single Player
90
Lots of challenge levels and a lengthy adventure mode will keep PvZ addicts plenty busy. While a story isn't needed what is provided is a nice addition.
Multiplayer
NR
None
Performance
95
Game runs smoothly with no drop in frame rate or slowdown of any sort. No crashes at all.
Overall
90
A standard tower defense formula mixed with a wonderfully weird and creative premise that truly enhances the experience. 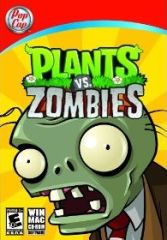